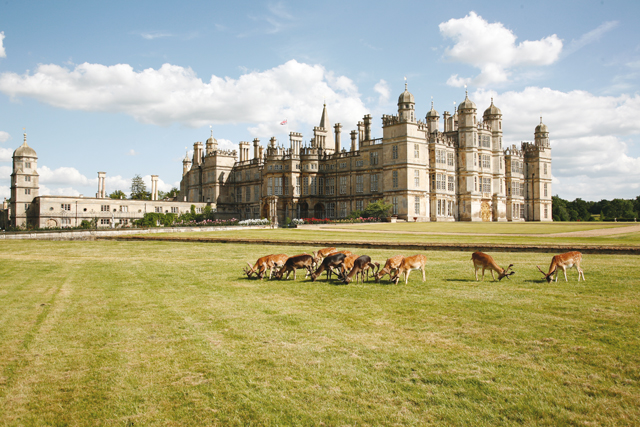 A job for all seasons

Several members of the workforce that helps with the smooth running of the Land Rover Burghley Horse Trials come from the Burghley Estate itself.
For the week of the event various tradesmen can find themselves deployed in completely different roles. One of these is clerk of works, Alan Scott who at the trials oversees the provision of the site services – water, electricity, drainage and marquees. Several members of his team of joiners, stonemasons and builders make up the arena party – the men that provide the muscle to build and dismantle the showjumping courses and provide general maintenance in both arenas.

That one week aside, Scott looks after the fabric of the house and all the estate properties. Building showjumps is piecemeal, however, compared to one of the building jobs that Alan oversees: that of the maintenance of the masonry and stonework of the house garden and park. One of the major projects to be completed recently is the rebuilding of the 300-metre Ha-ha originally built by Capability Brown 230 years ago. “It has been an ongoing project for the last ten years and it’s satisfying to see it finished,” said Scott, who has worked on the estate since 1982.

A job that neither Scott nor anybody else will ever see completed is the maintenance of the limestone walls within and around the park. Together the walls total around fourteen miles – the distance from the entrance of Burghley House to Uppingham. Scott said: “The park walls are an ongoing job and we spend around £40,000 a year maintaining them.”

Unfortunately the extremely wet weather experienced over the last year is not good for the walls, the stonemasons or the budget. “Wet winters play havoc – the limestone inside can get washed out, the salt and extra water from the roads also deteriorates the stone and if the saturated stone freezes it can crack and split,” explained Scott.

The splitting of the stone is what causes stone walls to collapse, although there is another reason why what was standing one day is on the ground the next. Scott said: “One of our biggest problems is cars that come off the road, hit the wall, knock it down, then disappear, leaving us with the repair and cost.” Mending the walls will also have to wait for drier weather due to the demands of the limestone mortar, which needs the right conditions to be effective for the ‘coursed and bedded’ walls. “Winter is not ideal for rebuilding these walls. However, the weather is not a problem for the maintenance of the dry stone walls of which we have a few inside the park.”

Sourcing the right stone is also not always easy. “We try and use reclaimed stone as much as possible but it comes at a premium, so sometimes we have to use new stone from the local quarries. It can, however, look rather like a new house so we do leave it to weather a bit before use,” said Scott.

“I came with the college on a visit to Burghley to look at the stonework and it was mentioned they were looking for an apprentice, so I sent in my CV and was lucky to get the job,” said Hollie, who arrived in September just in time to help with the pack down of the horse trials. “The job covers the whole spectrum of masonry and I enjoy it, as everyday is different. We could be working on the walls, a windowsill, doing a bit of carving or be up on the roof from where the views are amazing – it is a beautiful place to work.”

Hollie is not the only one who appreciates the beauty of her place of work. “We have a fantastically low turnover of staff,” said Scott. “Many tradesmen came direct from school and stayed – there is a lot of job satisfaction. And on a day like today, when the park is covered in snow and the deer are grazing, it just looks beautiful.”

So when you are next visiting the Land Rover Burghley Horse Trials look out for the stonemasons who inevitably will be hard at work repairing yet another section of the fourteen-mile wall.