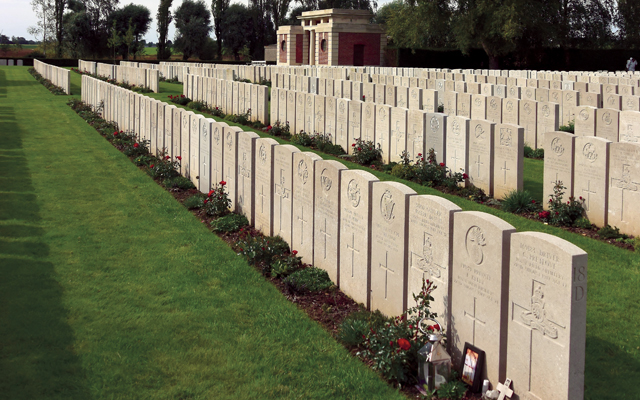 A legacy beyond the battlefields

Caroline Bingham was invited to accompany a group of teachers and pupils from Lincolnshire secondary schools on a commemorative tour of First World War battlefields.
Our base was to be Ypres, Belgium but our first night was spent at Grosvenor Hall, an activity centre near Ashford, Kent where pupils and teachers were briefed on the resources, itinerary and activities which would help them gain the most from the next three days.

The government sponsored programme is being run by Equity and UCL Institute of Education and has outlined significant aims, including innovative teaching and learning approaches, developing a deeper understanding of the significance of the war and to develop personal connections to pupils and communities. It is hoped that an enduring impact will be built through a post-tour ‘Legacy 110’ project. If every one of the over 8,000 students taking part delivers their project to at least 110 people in their community, then 888,246 people will be reached – the same number of British and Commonwealth soldiers who died during the First World War.

As Remembrance Sunday approaches I felt that, for me, nothing brings history more alive than by visiting the places where it happened but I and many in the group were not really prepared for the scale of this front line or the sight of the hundreds of large and small cemeteries dotted across the Belgian and French landscape. It is impossible not to be moved by the sight of regimented rows of similar graves, maintained in immaculate condition by the Commonwealth War Graves Commission (CWGC). They are oases of tranquillity and order, all with common features agreed when the commission began its work in 1920: the uniformity of the headstones and the information carved on them; the Blomfield designed Cross of Sacrifice; the Lutyens designed Stones of Remembrance and the Gertrude Jekyll inspired English country garden planting.

Looking at the many poppies, wreaths and crosses left on individual graves, memorials and wall inscriptions these elegant and respectful sites are still the focus of remembrance for today’s generation of families and organisations.

I joined the students on that first evening looking through the CWGC website. I researched the grave of my great, great uncle Thomas Henry Birkby, while they looked for their relatives, names on school rolls of honour or those from war memorials in their villages. Researching the human stories from amongst the terrible number of casualties is one of the ways of understanding the war’s impact on local communities.

Our first stop the following day was at Lijssenthoek Cemetery, the largest in Belgium, which was the site of a field hospital fourteen kilometres from the front line. The entrance walkway is lined with vertical metal rods, each giving a date and etched with lines to denote the deaths that day. As we walked along, the peaks and troughs of the intensity of nearby battles were graphically illustrated.

Our afternoon was spent in Ypres, a town so close to the front line that shelling all but levelled it to the ground. Lovingly and painstakingly rebuilt by the townspeople, it is hard to equate the relative modernity of the buildings with their historical appearance. The Flanders Field Museum in the Ypres Cloth Hall houses original artifacts, photographs and digital displays which bring to life the impact on the local community, troops and animals from both sides of the front line. After dinner we attended the Last Post ceremony at the Menin Gate Memorial to the Missing. Each evening at 8pm, the Last Post is sounded to remember the 54,896 British and Commonwealth soldiers who died in the Ypres Salient whose graves are unknown.

I had been asked to draw the names of two students who would lay a wreath at the memorial to mark our visit. They were accompanied by the serving army Lieutenant Corporal who came on the tour with us. Part of his role was to compare his twenty-first century military life with that of a First World War ‘tommy’. Although it was a wet, Monday evening we joined crowds of other spectators from many nations, witnessing this enduring and moving act of gratitude and respect.

The next day, I had the opportunity to visit the small military cemetery at Roclincourt, a village in the Somme, to find my great, great uncle’s grave. I can remember my great aunt and uncle visiting there in the late 1960s but my poppy was almost certainly the first one left since then. A member of the Royal Field Artillery, he was killed on 26th November 1917 aged twenty-four and his headstone carries the poignant inscription paid for by his family, ‘A daily thought. An everlasting sorrow.’

We continued along the Somme to the Lochnagar Crater, the site of the loss of so many of the Grimsby Chums (10th Battalion, Lincolnshire Regiment) on 1st July 1916. This massive mine hole was created when tunnels under a German stronghold were packed with explosives and detonated. It was reported that the blast was heard in London. The crater is almost seventy feet deep and 300 feet wide and was bought in 1978 to be preserved as a memorial to the many undiscovered remains of German, French and British soldiers who still lie in the ground there. (A commemoration ceremony for the centenary of this battle is planned next year. Details can be found at www.lochnagarcrater.org)

Later we moved on to the Beaumont Hamel Newfoundland Memorial Park, the Thiepval Memorial and Wood and the Ulster Memorial Tower and Mill Road Cemetery. A visit to excavated and recreated sections of trench gave an insight into front line conditions.

We were led throughout the tour by experienced guides who knew their subject thoroughly and also by other members of today’s British Army who understood the physical and strategic challenges of the battlefield. They could describe not only the soldiers’ experience but also the impact of the war on the landscape and where, just by looking down at your feet, you could still see evidence of shelling and shrapnel lying on top of the soil. Gazing across the tranquil, cultivated fields they brought recognition that here men fought and fell.

Our final afternoon included a visit to Tyne Cot Cemetery and a German war cemetery at Langemark to contrast how the German people remember their war dead. The morning had been spent moulding a pottery figure which will be part of a commemorative art programme commissioned by the Flanders Government, similar to the Tower of London Poppies. By 2018 they will install the 600,000 individually created figures in a local park, a sculpture for each soldier killed in Flanders during the war.

Listening to the students as they bonded as a group, identified their researched names and joined in the organised activities, it was obvious how much they had absorbed of the history and scale of this piece of British history. Their respectful behaviour, touching acts of remembrance and thoughtful questions had given them plenty of material to take home and share as part of the next stage of this commemorative project. I am sure many of their Remembrance Day services will include stories gleaned from their Battlefields tour.

HOW YOU CAN BE INVOLVED
As part of the WW1 centenary commemorations, the Department for Education in conjunction with the Department for Communities and Local Government will pay for one teacher and two pupils from every state funded secondary school in the UK to take part in one of the First World War Centenary Battlefield Tours. If your school has so far not taken up the opportunity you can find further details at: www.centenarybattlefieldtours.org.

SPALDING GRAMMAR SCHOOL HONOURS IT’S OLD BOYS
The group from Spalding Grammar School was led by teacher Lucy Smith, whose pupils Heather Montgomery and Mandana Mir Javadi had already researched names of two old boys from the School’s Roll Call for WW1. Heather and Mandana found their names inscribed on the Menin Gate alongside those of 54,000 other soldiers who have no known grave.