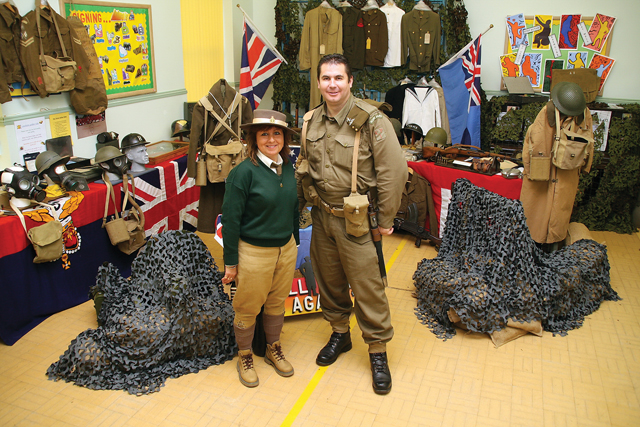 A lesson in living history

World War Two is being brought to life for schoolchildren in Lincolnshire and beyond, thanks to the vision and dedication of one couple who have created a mobile museum.
With the support of his wife Linda and family, Paul Britchford has finally realised his own lifelong ambition, by creating the We’ll Meet Again museum, which is helping to create an unforgettable learning experience for pupils of all ages.

The living history project, which the couple have invested thousands of pounds of their own money in, is believed to be the only one like it in the country. Stocked with hundreds of rare and valuable artefacts – including a Vickers machine gun – the Britchfords take their huge collection of uniforms, weaponry, toys and food packaging into schools for the day to give pupils learning about the period the chance to look at, handle and wear the items.

During the sessions the youngsters learn about all aspects of life on the Home Front during World War Two using authentic items from the period. On top of that they also get to find out about what life was really like for children and adults at home during the war years, covering topics including rationing, evacuation, the Blitz, the Home Guard and the Land Army.

The Britchfords believe their hands-on approach to teaching about the era stimulates the children’s learning ability, in turn giving them a better respect and understanding of the subject.

Getting the project up and running has not been straightforward as the couple have had to overcome many obstacles surrounding health and safety, insurance and also funding the scheme. But Mr Britchford is thrilled with the support he has received in the process, especially from the CfBT Education Trust, which has given its wholehearted backing.

Explaining how the idea came about, he said: “I’ve always regarded working with children as something very rewarding. I used to teach blind children many years ago, but gave that up.

“I’ve always had an interest in World War Two, collecting bits and bobs ever since I was about eight years old, and I had this idea about taking a mobile museum into schools to teach children all about the war.

“I was miserable in my current job, working in a garage, so I just told Linda what I wanted to do and she was very supportive. She said if it was going to be done, we should do it together. Now Linda teaches about the Home Front side of things, rationing and toys in the 1940s, how the war affected children and how the Land Army was really important for Lincolnshire. A lot of people said it was a great idea but thought we’d never get it off the ground.”

Thanks to their dedication and determination the Britchfords made their first school visit in 2010, which was a roaring success, and they haven’t looked back, taking more bookings across the county and beyond. They are overwhelmed with the positive response they have received from teachers, parents and pupils to date.

Mr Britchford added: “When we came up with the idea people said we’d never get the weaponry and items like that into the schools – but we also teach about the dangers of weapons and what they were used for. In this country’s case they were used for defence, not attack.

“A lot of youngsters have a basic understanding of weapons through computer games and they know what they are called – but we need to take away that glamorous side of things, which we do, and this is being backed by the parents.”

As well as the mobile museum, the couple have also been working on another World War Two ‘Real History’ project by creating a replica air shelter at Freiston Shore. The bunker, kitted out exactly as it would have been in the 1940s, complete with a stove, is also thought to be a one-of-a-kind teaching facility.

After securing all the relevant permissions the couple can now give youngsters a taste of what it would have been like to protect Lincolnshire’s coastline from Nazi Germany during the 1939 – 1945 conflict.

Mr Britchford said: “This is a fantastic resource near us at Freiston Shore; there’s all the coastal defence buildings from World War Two, which are some of the best examples in the country. We take the children down there in the army truck, dress them up as little soldiers with helmets, decommissioned rifles and gas masks and they think it’s fantastic.

“It’s taken a long time and a lot of extremely hard work – in fact it’s nearly cost us everything we have – but the reward is the children and their response. And this really is the best way for them to learn about the subject. “

The couple have been self-funded the past couple of years, but now the bookings are starting to come in they are hoping that Linda will be able to give up her job as a baker and work full-time alongside Paul. They want to run the museum as a business, but maintain that they will endeavour to do what they can to keep hire costs down for the schools.

The couple’s collection of World War Two items has come from a variety of sources, including donations, their own private pieces and pieces that they have bought, and they are always keen to receive more – especially if they are from a local source, with an interesting history, or story, which they can pass on through their teaching.

* For more information, to donate memorabilia or to contact the Britchfords visit www.mobileww2museum.co.uk