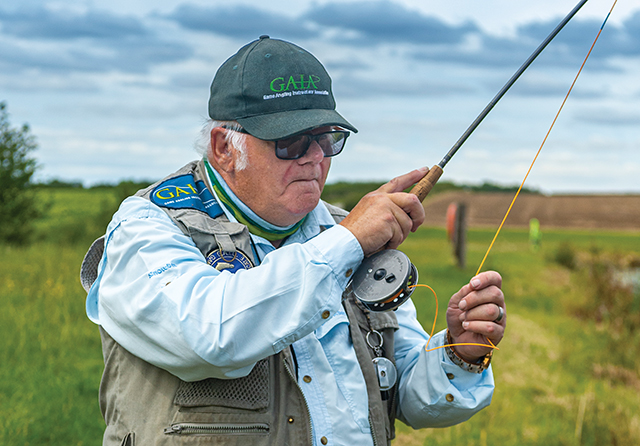 A life with rod and line

Some of Barry Grantham’s earliest memories of fishing are with his father Ron, when they lived at Timberland. Ron had served as a Sergeant in the Royal Engineers during World War Two, seeing action in the North Africa campaign and at Arnhem. Following the war, he found fishing a great relaxation, especially carp fishing, and Barry has clear memories of being taken by his father on the back of his bicycle to a local lake that contained large wild carp.

In those days Ron’s fishing rod was a split bamboo salmon spinning rod. He also used a swan quill float. When fishing at night, Ron used a homemade bite alarm, along with his favoured bait, a bread paste laced with honey. Ron made much of his fishing tackle, a trait Barry would soon carry forward. To keep the young Barry amused Ron would hand him a garden cane, at the end of which was attached about four feet of line with a float, weights and hook; the bait would be some of his father’s favourite bread paste. In those early days, Barry was successful at catching rudd, whilst Ron sat waiting patiently for the much-prized carp.

Barry was not allowed to join his father on his night fishing expeditions but would listen with wonder at the stories on his return; of another big carp and a journey to another water. Barry remembers him returning one morning and speaking to his mother, Sheila, of two anglers who were fishing that night, Richard Walker and Maurice Ingham. But Barry had no idea as a young five-year-old the two would go on to become lifelong friends and over the years also become great pioneers of modern carp fishing.

At the time school for Barry was in the local Timberland village, then at 11 years of age he moved on to secondary school in Ruskington. While there, he entered The Duke of Edinburgh’s Award and not surprisingly for the hobbies section he elected to make a fishing rod. Little did he know at the time that it would be the first of many. It was a split bamboo rod two-piece and about nine feet in length – as Barry commented: an ideal size for a young teenager out fishing. The rod did not let Barry down and over the years he caught numerous fish on it and admits that even today he still uses rods and reels that he acquired in his teens.

On leaving school Barry again followed his father in taking up an apprenticeship with Ruston & Hornsby in Lincoln. For the first year he worked in the apprentice’s school then moved to the toolmaking workshop working alongside his father. During this busy time, Barry was still fishing close to home mainly for tench and pike on Timberland Delph, where he formed a relationship with the local farmer, who offered him more waters to fish. It was also Barry’s first venture into fly fishing, inspired by a book that had been written by that family friend, Maurice Ingham – but it was not for trout, it was still for coarse fish.

After his apprenticeship finished, Barry moved to Yorkshire, where he would fish for barbel at night on the River Swale, but just a few years later, Barry returned home to Lincoln. He established his own business from a workshop in North Hykeham as a precision toolmaker and it became one of the busiest periods of his life. It was also the time he started fly fishing for trout and was looking for a split cane bamboo fly rod to fish the smaller rivers. Barry soon realised the kits that were freely available a couple of decades ago no longer existed, so he decided to make the rod himself, but to do that he first needed to produce the rod making equipment.

This could have been a real issue, but as a time-served apprentice toolmaker, it proved no problem and in the course of the next few years, Barry made a precision milling machine, a metal adjustable hand planer, and various jigs along with the glue binding machine and even the oven. In fact, all the machinery to make split cane fishing rods and most of the machines are still in use today, virtually 35 years later.

The early rods made by Barry were for himself or given away to friends, but it became a full-time occupation when the toolmaking business in North Hykeham closed. In the last 30 years, Barry has witnessed the ever-growing popularity of fly fishing across the country and the demand for his rods has equally grown and they are now seen as treasured collectors’ items by many a fisherman.

Today the vast majority of Barry’s rods are split bamboo and many are sold overseas with regular orders being sent to America, Japan, Finland and Norway plus Italy and South Africa. Every rod starts its life as a raw bamboo pole, called Tonkin, which is taken from a region in China of the same name. As Barry commented, it is the only truly suitable bamboo for rod making.

He explained: “These individual raw cane poles are known as culms, which I cut in half and number so I can match the two halves together. I then start a split at the end of the culm – by doing this as they dry out, they will split in that position. If I do not do this I can end up with several splits down the culm.

“I use the bottom of the bamboo pole for rod butt sections and the top for tip sections. You will find the nodes on the culm are closer together at the bottom and get further apart as you get to the top of the culm, so this results in fewer nodes in the tip section of the rod.”

A suitable culm is selected and first given a heat treatment to harden the bamboo before they are split into strips. The strips are then made into triangular tapered sections to the exact taper of the individual and unique rod being made; this is done either on Barry’s homemade milling machine or hand planed on adjustable steel formers.

“By using such a method, you can produce a perfectly accurate strip, which is then glued and bound together using a binder,” added Barry. “This ensures identical binding down the rod joint.”

Once dry the binding is removed and the joint is then checked for any twists and straightened, as necessary. Finally, the individual strips are sanded and polished.

Following the fitting of the ferrules plus a final check for alignment, a cork handle is made and sanded to both size and shape. Lastly, reel fittings are added, the rings are whipped to the rod using traditional silk thread before it is varnished and the specification added to the rod, along with the owner’s name if it is required. Barry also has the rights to use the Scottie Rod label, which is a small Scottie dog motif, provided the individual rod is made to the traditional and original ‘Scottie Impregnated Finished Rod’ design, which can be traced back in its current format to Aberdeen in Scotland some 70 years ago. Today an eight-foot six or a nine-foot rod are the most popular lengths, but it is a near three-week process to turn that raw Tonkin bamboo cane into the finished product.

In addition to his crafted handmade rods, Barry is heavily involved with Salmon & Trout Conservation UK who are dedicated to improving the condition of our nation’s rivers and supporting the population of wild fish. Barry is also a qualified fly-casting instructor with the Game Angling Instructors’ Association and can help anyone wanting to start fly fishing or to improve their casting; this is normally done through one-to-one training lessons at a local trout fishery. Plus, Barry is a popular attraction at many shows where he advises on equipment, instruction in casting and fly fishing demonstrations.

I sat with Barry recently, on the edge of his trout lakes, admiring one of his fishing rods: an eight-foot six lightweight number five rod, which not only handled beyond belief but was a delight to look at. I asked him who has been the greatest influence through his life? There was no hesitation in his reply, it was that old family friend Maurice Ingham, but also his father for both fishing and leading him into the toolmaking trade.

You don’t have to be a fly fisherman with an understanding of fly lines, rod and line weights or how to cast a fly to admire the craftsmanship, skill and dedication that goes into making one of Barry’s fishing rods; you just need to hold one and you can feel it. The rod weight is so light, the balance is perfect and the look is appealing and yet they are made strong enough to fight with a trout in fast-flowing water. It is hardly surprising that a well made split cane fly rod has more than once been compared to a quality made British shotgun in terms of appeal.

To learn more about Barry Grantham and his Fly Rods go to www.barrygrantham.co.uk