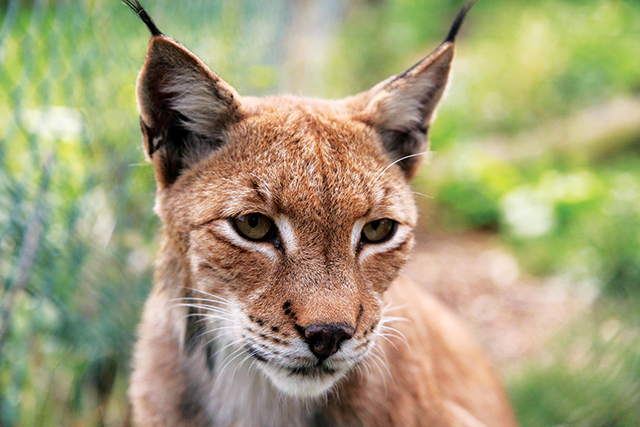 A lifetime of caring for creatures

Kate Chapman interviewed Lincolnshire woman Pam Mansfield, whose passion for animals has led to dedicate her life to their wellbeing – and her very special sanctuary has now been established for 40 years.
Through the Exotic Pet Refuge, Station Road, Deeping St James, which she runs aided by a team of volunteers, Pam has taken in and cared for thousands of unwanted, mistreated and injured creatures and wildlife.

Relying on charitable donations, sponsors and people generously giving up their time, the refuge currently provides a home for more than 250 animals including monkeys, owls, an alligator, snakes, an ocelot, meerkats, lizards and more. Many of them stay with Pam to see out their days, while some of the wildlife, once fully recovered, is returned back to its natural habitat.

“We never intended for it to be like this,” says Pam. “It was just something that me and my husband Mel shared. He died nearly thirteen years ago but I have carried our work on.

“People knew we liked animals and would take them in and it really started from there. It was more of a hobby to begin with but eventually it grew and became a sanctuary, and in 1984 we registered it as a charity.

“This means we can have six open days a year and to me it’s more important to be a sanctuary than a zoo. We like it this way, without the regulations of a zoo, while the animals aren’t being disturbed and stared at all the time.”

Pam says her love for animals stems from her father and grandfather who were both passionate about them. She was always surrounded by pets as a child, although mainly cats, dogs and budgies, which continued when she met and married Mel, whom she describes as ‘animal mad’ and always the first to volunteer to take in any stray or injured pet.

She recalls their first exotic animal was a Burmese Python, which they saved from a watery grave when its owner, who was unable to keep it any longer, was threatening to throw it in a river. They managed to persuade him otherwise and bought it for £10.

Mel fashioned a cage from some DIY supplies and Pam’s sideboard and the snake lived in their bedroom.

“After the python people used to bring us things all the time – we’d get fox cubs and umpteen parrots and budgies. And then things really snowballed. We had our own son Darren and outgrew the house, so we had to move and then we came here to Deeping St James about twenty years ago,” she adds.

“Looking after the animals is all down to common sense. If we get anything from a zoo we know we cannot mix them in with our own, as they do not know the pecking order. If you put in an animal that’s used to having its own way when it wants it, they will fight.

“Most of them are quite tame though. Some spit and can be a bit nasty but they soon learn who loves them.”

Of all the animals Pam has cared for there are a few that have a special place in her affections, including a couple of baby monkeys – one she’s had since it was five months old and is now 36, and another that she hand-reared.

“Stephie is a little spider monkey, she’s two now, but she still comes into the house. It only started because I was rearing her and she had to be fed every hour; me and my son used to take it in turns,” Pam explains.

“I don’t really have favourites, I love them all, but others that stick out are a deer that I hand-reared and then there’s my eagle owl, Thor, who’s now 27. I hand-reared him from an egg, he’s very special to me – he knows who I am,” she adds.

The refuge holds an exotic animal licence in order to keep and care for its inhabitants, many of which have been mistreated or outlived their owners, while in other cases they are unwanted because people simply don’t realise what they have taken on.

Pam says a lot of people do not realise that creatures such as tortoises can live for up to eighty years and she is urging pet owners to make provisions for their animals in their wills, to ensure they are looked after once they are gone.

As a charity Pam and her team – which comprises of a manager, five full-time volunteers, as well as other helpers including work experience students and children – have to raise at least £80,000 every year to keep the refuge open. The electricity bill for one month alone can be over £2,000 and as a result Pam says they cannot take many more reptiles like bearded dragons on because the amount of electricity their tanks use is phenomenal.

To help bring in vital funds the sanctuary offers experiences such as ‘be a keeper for a day’, guided tours, birthday parties, photography workshops as well as its annual open days and animal sponsorship opportunities. There are also ongoing appeals for donations of food, building materials and enrichment activities for the animals too.

“Sometimes we really struggle to pay the bills,” says Pam. “We’re a charity and are always looking for people to help us. It’s very hard work my job now, keeping up with emails, trying to get the money in, admin and phone calls. But without the money there would be no animals.

“When you stop and think about it, we’ve looked after thousands of animals over the year. We really never intended it to be like this, but it’s wonderful to help them.”

To find out more about the Exotic Pet Refuge and to make a donation visit www.exoticpetrefuge.org.uk