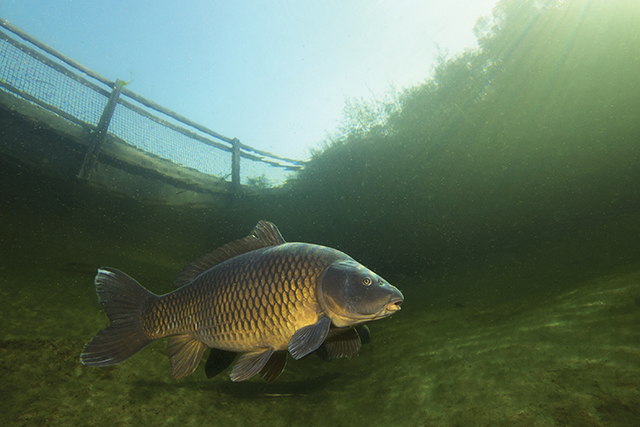 Back in the 1950s very little was known about catching specimen fish. This was to change. A keen angler from Louth whose main interest was fishing for specimen fish wanted to catch large carp. This angler was Maurice Ingham.

Maurice was born in 1919 and lived with his grandparents on a farm at Brinkhill, Lincolnshire. Maurice liked to be known as a Lincolnshire Yellowbelly. His upbringing on the farm was to give him his love of the countryside.

When World War Two broke out Maurice joined the Royal Army Medical Corps and was an instructor at the army school of hygiene and tropical medicine. He was later posted to West Africa and travelled widely and was involved in anti-malarial work. When the war ended he returned to his job at Lincolnshire County Council as deputy county planning officer until he retired in 1977.

On returning from the war, Maurice was known as an angler who loved fishing for large fish of all species. His favourite fish was the carp.

In the 1950s little was known about carp fishing and there was not suitable tackle available to purchase. Maurice had been fishing for carp for about three years and had realised how inadequate his fishing tackle was and the methods he was using to fish for carp.

Around this time an article appeared in the Fishing Gazette about fishing for carp and the sort of tackle needed. It was written by someone called Water Rail. In the article, Water Rail wrote that he also had difficulty in finding suitable tackle for carp fishing and that he had designed and built a rod especially for carp fishing.

Maurice wrote to the editor of the Fishing Gazette asking for his letter to be forwarded to Water Rail. A prompt reply was received and Water Rail was revealed as Richard Walker of Hitchin, Hertfordshire. Walker told Maurice about a fishing rod he had designed and built specially for carp fishing. Maurice went on to build the rod that Walker had designed and the two started a regular correspondence.

Another angler who was pursuing carp with Richard Walker at the same time, Denys Watkins Pitchford, known as BB, author and art teacher at Rugby school, suggested the letters between Walker and Maurice should be compiled into a book. This was done and the book was called Drop Me A Line. The letters between the two describe success and failure in fishing for carp. In one letter Maurice describes a battle with a large carp in a Lincolnshire lake that lasted 6 hours 40 minutes. Maurice was using a rod made from an ex-WD tank aerial and a centrepin reel. The carp rod Walker described and that Maurice was building was not quite finished.

In June 1951 Maurice was sitting on the embankment of Mapperley reservoir along with Richard Walker, Denys

Watkins Pitchford and John Norman. They talked of forming a Carp Catchers’ Club.

The club was set up and went on to have great success. Other carp fishing addicts were invited to join. The members’ ideas and catches were shared by a rotary letter sent from member to member, just as Maurice and Walker did in the previous years. Again these letters have been published in book form: The Carp Catchers’ Club by Maurice H Ingham.

My father was also a keen carp angler in the 1950s and fished the same lake in the Lincolnshire Wolds as Maurice.

Having read about Maurice’s fishing exploits in the Fishing Gazette, imagine my excitement when my father returned home from an overnight carp fishing session and told me two other anglers were there fishing the lake, Maurice and Walker.

My father fished the lake several times after that and saw Maurice on a few occasions fishing his favourite lake. Little was I to know in later years that I would become good friends with my childhood angling hero.

Not only was Maurice a good carp angler but also a very good all round angler. In the mid ’50s the Daily Mirror organised an angling competition. The idea was to catch as many species of fish as near as possible to the current British record.

Maurice was a craftsman. He made his own carp rod that Walker designed, he made carp landing nets and made the first electronic bite alarm.

Maurice helped me a lot in what I now do, hand crafting fishing tackle. He gave me detailed drawings of tackle he and Walker had designed and made, enabling me to make the tackle identical to what they used all those years ago.

Maurice loved the outdoors, especially the Outer Hebrides. On a trip there in 1986, he suffered a serious stroke that left him disabled.

He moved from Lincolnshire to the Bristol area to be near his daughter Pat. He continued to keep active by painting in watercolours.

Today there is plenty of specially designed tackle with which to catch carp and other specimen fish. I just wonder how advanced the tackle would be today had it not been for our own angling pioneer from Lincolnshire, Maurice Ingham.