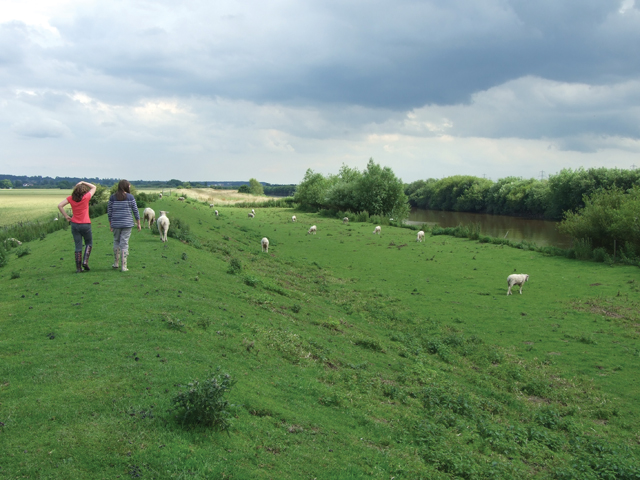 Preserving the rare breeds of England has often been associated with the elder statesmen of the farming community but there is a new generation of enthusiasts coming through and we have one of the youngest here in Lincolnshire.
James Chantry of Walkerith, Gainsborough first began to breed sheep as a young boy but it was not long before he was smitten with Lincoln Longwools and his parents bought him his first gimmer as a birthday present.

“They are really handsome and placid characters and their rarity made them an obvious choice to try to preserve and improve the breed,” said James.

“I have been breeding for eight years now and I am still only nineteen but I have built my flock to be nearly fifty strong.”

Lincoln Longwools are descendants of an ancient breed and James keeps the improved strain that was bred in the seventeenth century by Robert Bakewell for its luxurious fleece, which was greatly prized at the time.

“Not only are they among the largest English breeds they also have long legs which meant they could be walked over considerable distances to market without losing too much body weight,” explained James.

Not that James breeds his pedigree Fieldside Flock for meat; they are pampered pet animals who compete at the Lincolnshire Show and other livestock events around the county.

“I am looking for opportunities all the time to make more people familiar with the breed. I sold three animals last year to The Sheep Show, which tours game fairs and events around the country, giving sheep shearing demonstrations and educational talks. It made me really proud to know that sheep from my flock were chosen to be showcased in this way.”

Other animals are sold for breeding and to other enthusiasts to keep the bloodlines strong.

As a large sheep the Longwools have prodigious appetites and their summer grazing on pasture land adjacent to the River Trent is still supplemented with sheep nuts and other tasty treats.

“The flock just would not do well enough if they relied on grazing alone,” said James. “We have to supplementary feed, which does make this quite an expensive hobby.

“We also feed additional oil to the flock to encourage the deep yellow and oily trademark feature of their wool, which is always highly marked when they are judged at shows.”

The fleeces when clipped are very weighty but their value is now as little as £15 to £20 each. The natural variation of colour throughout the fleeces is popular with craftspeople though and is being utilised for weaving and felting. Not enough to make the flock self-funding though, and James finds a considerable part of his monthly wage as an agricultural engineer is spent on their feed and care.

Care of the flock is required seven days a week and lambing time is especially busy. Luckily James is supported by his parents and his girlfriend, Courtney, herself from a farming family, who is happy to muck in and do her bit.

When the time comes for lambing to begin, James is able to move the ewes into the old Lincolnshire Long Barn that the family rent adjacent to their smallholding. “The barn is over one hundred feet long and probably over three hundred years old. It is one of only a couple that still stand in the county. It is divided along its length into specific areas for horses, equipment and stalls for livestock and we can bring all the ewes into shelter to give birth.”

Carved into the outside face of the bricks are the names and initials of shepherds and farmhands who have worked in the barn.

“I have carved my name,” explained James, “below the brick which carries the name of my grandfather. It makes me especially proud to have this connection and continuity with this building and with farming in the family.” James even has his own shepherd’s hut distinctively original to Lincolnshire, made from corrugated metal, raised on wheels and equipped with a bunk bed, small table and pot bellied stove.

James is member of the Lincoln Longwool Sheep Breeders Association and would love to see more young people taking up keeping and breeding Longwools.

“Sheep keeping and breeding is a fascinating hobby, especially when you have a beautiful and rare breed like this. I am always happy to talk to people about them, and myself and other association members are here to help champion the breed,” he said.

If you would like more information about Lincoln Longwools visit: www.lincolnlongwools.co.uk or you can contact James at www.fieldsideflock.co.uk or tel: 07915 920474.