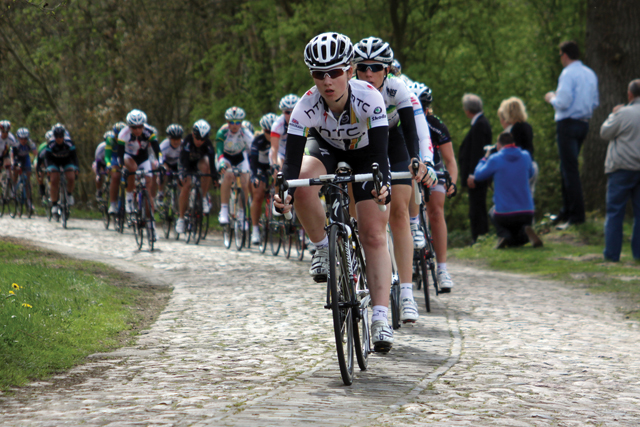 A look behind the mask

It takes great maturity to be something of a veteran of your sport at the tender age of twenty-one, yet possess enough confidence to switch disciplines less than a year before the biggest opportunity of your career.
Frieston cyclist, Katie Colclough has taken everything in her burgeoning stride, and can now view the bigger picture from the enviable vantage point of her winter training camp in sunny Majorca.

Cycling competitively since 2004, after being inspired by the British Cycling Roadshow’s appearance at her school, she remained the bright young hope of the all-conquering track team led by Victoria Pendleton, until joining Mark Cavendish’s HTC Highroad team of road racers last autumn. Ultimately, as it turns out, it was all with London 2012 in mind.

“I didn’t want to do things by half,” she explains with typical conviction. “Until last summer I still wanted to make track cycling my focus for 2012 but with everything stepping up in quality, I didn’t think I’d be likely to make the team. But I still thought I had a chance with one of the places in the road cycling team.”

Seven women are fighting for four places, and Colclough has some vital, painful experience which may give her the edge. She described her fourth place in the points race at the 2010 Commonwealth Games as ‘the worst place to finish’, being so near yet so far, and her gameplan for 2012 is simple.

“You’ve just got to believe in yourself. I need to keep going and not let it knock my confidence,” said Katie. “I don’t want to change too many things, or do things differently so close to the Games. It’s about working harder on the things that went well.”

Rejoicing in the nickname of ‘Mask’ because of the implacable concentration etched into her face, regardless of the pressure or pain felt in the saddle, hard work is something which appears to come easily to Colclough. The question of whether sporting talent is born or created is as old as the Olympic Games itself, but Katie recognises which side of the equation her success is built upon.

“I think my natural ability is in the fact that I can train hard,” she said. “It’s probably more in my head than in my physique, maybe. Athletes aren’t defined just by their muscles; they’re defined by the way they do things and work towards their goals. My main talent is the mental part of the process of sport.

“When you’ve got six hours of training ahead of you,” she continued, outlining the unseen toil which makes the public performance look so effortless, “and you’re already tired from the five hours the day before, that’s definitely where people could crack. It’s going that extra mile that makes the difference. There are some athletes who don’t put in the hours and don’t do all the little things right but are still naturally good at it; and there are some people who will fall flat on their face because they don’t do those things.”

Despite being European under-23 champion, British Junior champion and part of the gold-medal-winning pursuit team at the 2010 European Elite Championships, Colclough is, by her own admission, still learning in the midst of one of the most successful coaching structures in British sport.

“I feel like what I’ve learnt in the last year is the most that I’ve learnt in ages. The British Cycling Academy is a very educational set-up. They teach you a lot, so you’re not just doing things for yourself – it does feel like a school. This year I’ve also gone off and served my apprenticeship with the (Highroad) team. I have to think for myself and organise my own life now.”

Yet part of that pastoral care offered by HTC Highroad focused on a more distant future, and the realism that a sporting career can be frustratingly fleeting.

“It’s made me think, ‘what do I want to do when I’m thirty?’ I’ve always thought that I will never carry on when I’m over thirty, but in my team this year there are a lot of older role models, people like Clara Hughes (thirty-nine-year-old Canadian, and Olympic gold medallist in both cycling and speed skating). She said that she never thought she’d carry on this long, but as long as you’re enjoying it you’re not going to stop. So I guess I’ll wait for that day when I know I don’t want to do it anymore,” said Katie.

Having already achieved so much – especially for someone who fell into cycling almost by mistake – devoting over a third of her life to the sport, Katie is also aware of that existential dilemma inherent in all sports: that the thrill of the chase may be greater than winning. Is there a danger of anti-climax and not feeling the rush of adrenaline and satisfaction you had hoped?

“A lot of people look so stressed with it,” she said of medallists and record holders. “You just assume that’s what you want, because it’s what you’ve been trying for all your life. You don’t know, though, because you’ve never done it before.

“I just like to think that as soon as I’d done that I’d be happy, whatever happened, for the rest of my life. And I’ve seen lots of people that have done it looking stressed.”

For now, though, the anticipation is building towards the opening ceremony on 27th July. “It will be awesome, a one-off opportunity. There are other Olympics to come but there will never be another London 2012. It still feels a long way off, but when you see the countdown you think, ‘that’s not that long!’ I keep telling myself it’s ages away!”

With the advent of Team Sky and the flood of medals earned by genuine sporting icons like Pendleton and Sir Chris Hoy, the future of British cycling seems promising, especially after Cavendish became the second cyclist in four years to be named BBC Sports Personality of the Year in December.

“Cycling has developed so much in Great Britain now,” said Katie. “It’s great to be part of the team. So many people are in high spirits and doing well. It’s always nice to be part of a successful group. Now the sport is established, I feel like British cycling will be able to stand on its own more and more, as UK Sport would cut the funding if we’re not successful.”

“But you forget how big the Olympics are. It’s everywhere, in advertising and there are millions of people watching on TV. It’s going to inspire so many people to get into sport. When I was a kid I watched the athletics on TV, and you see people being happy and successful, they’re fit and healthy. It’s a nice way of life and it makes you want to follow in their footsteps.

“I just want to be enjoying myself, and at the moment cycling makes me happy.”