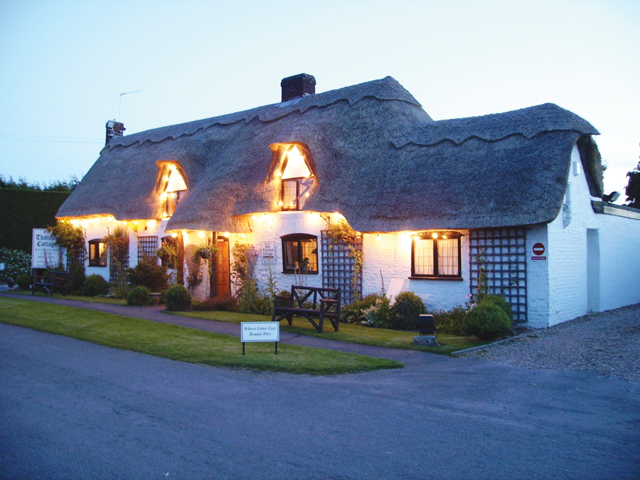 A peaceful pint and plot

In many areas of the country the great British pub is a dying breed, but one Lincolnshire couple is turning this notion on its head by diversifying in a rather unusual way.
As well as establishing a beautiful nature reserve behind the Thatched Cottage, in Sutterton, owners Bob and Marion Lowrie have turned over part of the area into natural burial ground, where people can be laid to rest at one with nature.

After taking over the pub in 2005 the couple began creating their wonderful wildlife haven by lovingly planting 2,200 English native shrubs and hardwood trees – seventeen species in all – across an eight-acre site. Many of these trees including poplars, guelder roses, oaks and wild willows now stand at around ten metres tall and the area in which they grow is protected as a conservation and wildlife park. The arboretum is home to an abundance of flora, fauna and wildlife including hedgehogs, field voles, shrews and moles alongside a resident barn owl plus a visiting kestrel and sparrow hawk.

In addition, their reserve contains a mile of meandering footpaths, set out in a fleur-de-lys pattern, made up of a central branch with several loops coming off it. Permission was granted to turn part of the woodland area into a natural burial ground, creating between 800 and 1,000 plots for those wishing to be laid to rest in a completely natural environment.

Mr Lowrie said: “Basically, Marion had an insurance policy mature, and when asked what she was going to do, she said, ‘pay for my funeral’.

“Someone suggested she could be buried on the nature reserve, as you are allowed to be buried on your own land.

“We contacted the Natural Death Centre and Association of Natural Burial Grounds to find out more, and one thing that struck me was that all the sites were meadows or fields – none of them were really in woodlands.

“You could have a tree planted on your grave at a cost of £500 – well, we’ve already got the trees here. So fifteen months ago we were given approval for the site and we have the only natural burial ground associated with licensed premises.”

More than five South Lincolnshire Natural Burial Ground plots have already been taken, with another fourteen reserved, while enquiries from all over the country are constant.

“The plots are larger than a conventional cemetery plot – around three metres by 1.4 metres – and you can have a tablet laid on your grave, although they can’t stand like a normal headstone, and we’re open all year round to visit,” said Mr Lowrie.

“People who’ve been say how beautiful it is. Our regular customers take it as a natural extension to the business – we’ve not taken any less trade as a result.

“Visitors stay and have a meal, people coming to visit graves come in and have a coffee. It’s not in people’s faces – it’s more than a quarter of a mile away from the pub building.

“Our clients come from all religions, Church of England and Catholic; there’s been no resistance from the clergy. In fact they all compliment us on the place. While you’re having a service the birds are tweeting away. It’s just absolutely natural,” he added.

The couple moved to Sutterton from South Ferriby, in North Lincolnshire, where they previously ran the Hope and Anchor pub after taking it on when Mr Lowrie retired from his post at Shell.

“I didn’t want to go back into industry and didn’t want to travel, so we looked at kennels, taxi companies and all sorts of different businesses. We really wanted something we could do together.

“As well as buying the field we’ve extended the kitchen to improve it and extended the restaurant and garden room,” said Mr Lowrie.

Another successful addition has been the creation of a farm shop, which opened in 2008. Lack of demand for a delicatessen has led the couple to concentrate on selling fresh meat in the shop and online, and they are able to offer next-day delivery throughout the UK.

“It enables us to buy in beef, pork and lamb in carcass and butcher it here, selecting it carefully which we do through A Wright & Son, of Boston,” said Mr Lowrie.

“We only buy quality Lincolnshire meat, then we hang it for between two and five weeks, and butcher it here, so we can control the quality of what goes to the tables. And what we do not sell in the restaurant we sell in the farm shop or online.”

The Thatched Cottage restaurant accommodates sixty-four diners, with seating for a further thirty-six on the patio and twelve more in the bar. The pub proudly boasts an extensive menu, the core of which is traditional English food, with a local bias. International dishes – like wok stir fries with a Szechuan sauce – are also available alongside fish and steak meals.

The Thatched Cottage has a lunchtime menu including bar snacks, while from 6pm it offers the same menu without the lighter options.

* The Thatched Cottage is open daily from 11.30am to 11.30pm. For information about the pub, restaurant, nature reserve and South Lincolnshire Natural Burial Ground visit www.thatchedcottagerestaurant.co.uk or call 01205 460870.

MARKET GARDEN TO PUBLIC HOUSE
The Thatched Cottage has been a public house for around twenty-seven years. During the early part of the twentieth century, the impressive building was home to a market garden facility, while in the eighteenth and nineteenth centuries it was an agricultural holding in the old French allotment style.

The timber-framed building would have provided homes for agricultural workers, who for four days worked for the lord of the manor, two days for themselves on their own land, while the seventh day was set aside for rest and church.