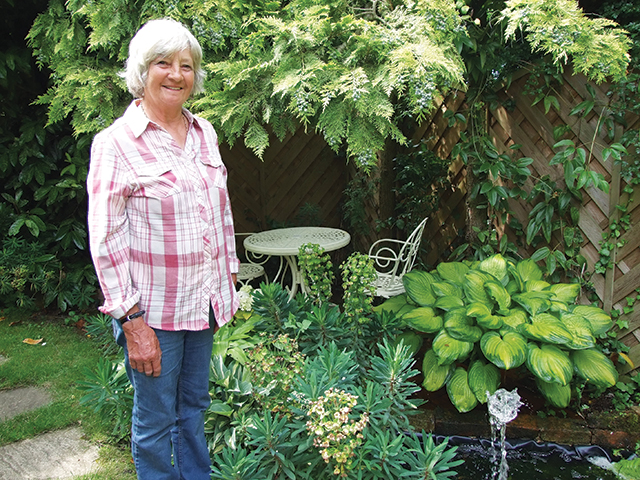 Caroline Bingham visited Frog Hall Cottage gardens at Wildmore Fen, Boston to have a tour courtesy of their creator, Kathy Wright.
I think we all associate Fenland with its magnificent big skies and expansive acres of farmland but I often wonder what lies behind some of the tall hedges around homes. I have visited many sites where a perfect microclimate has been created within the shield of trees and shrubs. Frog Hall gardens are a perfect case in point. The entrance to the car park is off the busy B1192 route through New York but once off the road, the well-stocked plant stalls and polytunnels of the adjoining nursery appear in view.

Kathy met me and we followed the winding path, beneath the pergolas and past the outdoor kitchen and tea area, through themed garden rooms to the conservatory, where she told me how she came to settle in Lincolnshire.

“I grew up in Suffolk and worked in accountancy for many years,” Kathy said, “but although I had a small garden there, it was always my ambition to create something larger.

“I loved flower arranging and took a qualification in floristry but that just fired my desire to plant even more. Nearly thirty years ago, I found myself on my own and began to look around for a suitable property with land. Lincolnshire fitted my budget, even though I did not know the county well. When I found Frog Hall and its three-quarters-of-an-acre of land, I loved the name and the landscape but not so much the two former agricultural cottages which were derelict and overgrown with brambles. I lived in a caravan on the site for two years while I put all my effort into building up the nursery and making the house liveable followed.”

Kathy explained that her interest has always been in unusual species and that is her speciality for the garden and nursery. She began with many plants from Cornwall and establishing a hedge of cupressus and extending the hawthorn hedge which was already there was a priority. The garden is her stock bed for trialling and propagating plants for sale. It is not always plain sailing and despite the microclimate she has created, Kathy did lose an escallonia hedge in the bad winter of 2010/11; it had to be ripped out and replaced with fencing in time for the spring open days.

This garden for all seasons has been formed around a series of classically designed ‘rooms’ which radiate from the house and offer a new vista and aspect at every turn. The sheer variety and abundance of planting is staggering, especially considering that the garden is on predominantly clay soil. I got the distinct impression that Kathy is a compulsive plantswoman; it is just in her bones to find the ideal setting in which they can thrive.

After a cup of tea, we set off to follow the pathway further. The view from the conservatory had been of a bird box garden with teak table and chairs; a cosy alcove for wildlife and humans. Wrapping around the back of the house is a more formal patio area leading in one direction to the rose walk and classical garden, while the left hand route takes you past a stream and small pool with a fountain. This is a more recently planted area for hostas and heat tolerant species.

Kathy told me that despite the fact she purchased a further acre of land on which to house the nursery and car park, she has now filled the whole site and completed the garden. Her most recent transformation was two years ago, when the dyke area which runs in front of Frog Hall was cleared and focal points of statues and shade loving ferns made this a dappled walkway to complete the circuit around the house.

I asked Kathy which is her favourite spot of all the ones she has built: “I think it must be the large courtyard area with its thatched summer house and dining patio,” she responded. I can see why. This gravelled, soft paletted and tranquil haven at the centre of the garden is an ideal outdoor entertaining space. The table in the summerhouse was set for tea for three and from every angle there are shrubs and perennials in full bloom.

The rose walkway, thick with scent and gorgeous colour is home to many stunning varieties including the one which caught my eye: the shrub rose Rhapsody in Blue, which was at its absolute best.

One of my favourite areas is a linking passageway between the gravel garden and the lawn beds which is decorated with an antique miniature pony cart which Kathy found locally.

Kathy assured me that despite its size the garden is relatively easy to maintain and she does this all herself with support from her partner. She said: “I have designed it to be self-sufficient, so with minimal pruning and weeding it really does look after itself.”

The space furthest away from the house is a wide lawn with a large pond and ornamental beds which overlook the neighbouring fields. Here the sweeping limbs of a Parrotia persica pendula make an elegant feature in an island as you enter the open space.

As well as the regular customers who visit the nursery, Kathy hosts groups and coach parties who make a day of touring the garden and enjoying homemade cakes and refreshments, served from the purpose-built outside kitchen and its surrounding pergolas and marquee.

It has taken her nearly thirty years but Kathy has achieved a life’s ambition to build a wonderful garden. I asked how she would fulfil her planting urge now that the garden is finished but she laughed and she can always find a small space which is crying out to be filled or an area which can be improved. Propagating and maintaining the nursery is still hard work and as well as summer hanging baskets, there are festive wreaths to be made in winter and of course that helping hand the garden needs to look its best whatever the season.

MAKE A DATE TO VISIT FROG HALL GARDENS AND NURSERY
If you would like more information on arranging for a group to visit the gardens, contact 07885 030 943 or email: froghallnewyork@gmail.com