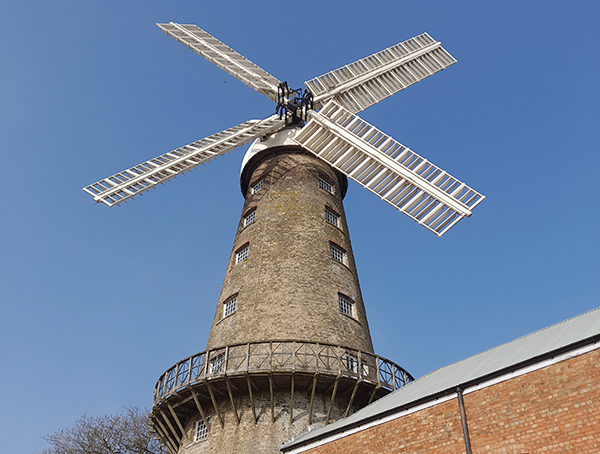 There’s plenty to celebrate in Moulton this year, with festivities to mark both HM The Queen’s Platinum Jubilee and the 200th anniversary of the village’s historic windmill. By Kate Chapman.

The Moulton Mill 200 Year Anniversary & Queen’s Platinum Jubilee Celebration Committee has organised four days’ worth of events in June to mark Queen Elizabeth II’s 70-year reign while several more are planned throughout the year to honour the mill’s bicentenary.

At 100 feet high, Moulton Mill is the country’s tallest working windmill. Following an extensive restoration project led by villagers, the Grade I listed building has been open as a tourist attraction since 2005, and annually welcomes through its doors 25,000 people, whose support is vital its upkeep.

As well as guided tours and the chance for visitors to have a go at milling themselves, the attraction also has a traditional tearoom and a well-stocked shop.

Mill manager Janet Bellamy, who has been involved since the restoration project began 25 years ago, said there are lots of things planned to mark its special anniversary.

The building will be participating in National Mills Weekend on 14th and 15th May and hosting a quilting exhibition in the same month, while a tractor run featuring 200 vehicles – one for each year of the mill’s existence – is also planned. Other highlights including craft fairs, Woad Fest (a celebration of crafts, including workshops) and a festive brass band performance are planned along with a special celebration party.

The mill will also be central to the village’s Jubilee celebrations – as the starting point for its lantern parade and by hosting a special afternoon tea on 3rd June. A children’s event to parachute teddy bears from the building is also planned for the bank holiday weekend.

“There’s lots to look forward to, on top of all the usual events we hold, with more things being confirmed all the time. The best thing people can do is keep checking our website for updates,” says Janet, who has announced she is standing down from her role with the mill at the end of this year.

“I’ve had 25 years with the mill – it’s been a big part of my life, so it’s a decision I’ve not taken lightly. I feel it’s time to move on and make way for fresh ideas and new blood, to take it through the next part of its story,” she added.

“For me it’s an ideal time to celebrate and hand over to someone else. The mill is in a really good state and a good position financially – I’m not closing the door completely, but it’s time for me to focus on other things.”

Built in 1822, Moulton Mill’s four sails were removed in 1894 following a storm, when they suffered irreparable damage. Flour was then milled using steam power and electricity. The building was mainly used to produced animal feed until 1995, when the third generation of the Biggadike family, who owned it at the time, retired.

In 1998 a group of villagers decided the building should be renovated and brought back into use under wind power. They secured a 200-year lease from the site owner, formed a registered charity and launched a £1m programme to repair the building’s structure, reinstate the ogee cap and convert a granary building into a tearoom.

The mill opened to the public in 2005, while the restoration work continued. In 2009 the outdoor reefing gallery was reinstated, and the sails replaced in 2011.

“From the moment we started the project, I never doubted we would complete the restoration and reinstate the sails, although there were others who did,” adds Janet.

“What I didn’t anticipate was how long it would take us. We started in 1998 and completed the first phase by 2005 and then finished the second another six years later. In restoration terms it wasn’t actually that long. but I never doubted those sails would go on. It’s really going to be an exciting year ahead as we move the mill towards the next phase of its future.”

Thanks to committee members and sponsors, an extensive schedule of Jubilee events are planned for Moulton this June.

Committee member Steven Adcock said it’s great to see all the village coming together and promises the events programme will offer something for everyone.

“I remember attending a Silver Jubilee street party when I was a child, and it was great fun,” he said.

“During lockdown lots of people sat out in their gardens to mark VE Day, there was a great atmosphere, so a few of us decided we should do something for the Platinum Jubilee too.

“We’ve put together quite an ambitious programme but it’s really starting to come together now. Lots of village groups are getting involved including the mill, the church, the primary school and Brownies. It’s great to see old and young all coming together.

“We’ve just learnt the village is getting a beacon too, which is great. There’s been lots of support and sponsorship from village businesses, which means that we’re able to put all these things on, mostly for free. We’re hoping it’s going to be a great celebration.”

The festivities start on 2nd June, with a lantern parade around the village, culminating in the lighting of the Jubilee beacon at 9.15pm. A family disco is planned for the following evening after judging for the Prince/Princess competition. Moulton Trooping the Colour and Village Fete take place on Saturday 4th June, when there will also be a parade of vintage vehicles through the streets with the Jubilee Prince and Princess in attendance.

During the afternoon vehicles will be on display, plus there will be craft stalls, games and other stalls at the community centre, mill, Village Green and church, along with face painting and children’s Jubilee goodie bags. Fete competitions include painting, cakes and photography. The Swan pub will show Party at the Palace on a large screen in its garden.

On Sunday (5th June) the village is taking part in the national Big Jubilee Lunch – with the road closed from the Village Green, along Broad Lane to the Community Centre. Tables and chairs will be set out for villagers, who can turn up armed with a picnic to join in.

In the afternoon a Moulton’s Got Talent show for adults and children takes place on the Village Green, followed by the Big Jubilee Raffle. All Saints Church will also be hosting a flower festival for the duration of the weekend and there will be flypasts taking place too.

Photographs: courtesy The Friends of Moulton Mill, and Kate Chapman