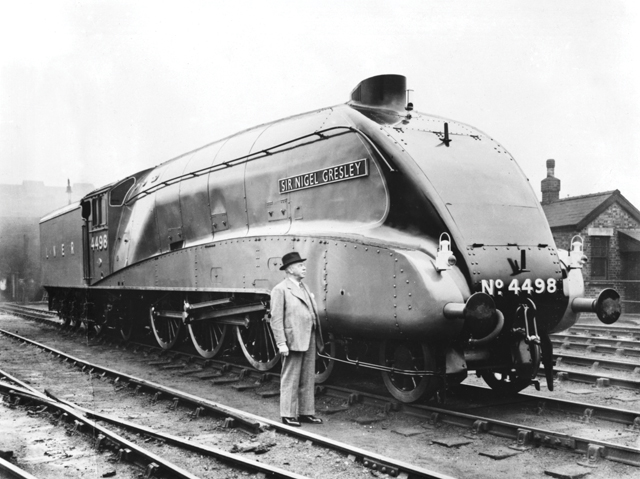 On 3rd July 1938 driver Joe Duddington (then aged 61) climbed into the cab of Mallard and booked its place in history by reaching a new world record for steam locomotives of 126mph on Stoke Bank – south of Grantham on the East Coast Mainline.
Mallard’s achievement in clinching the world speed crown for steam locomotives is being celebrated by the National Railway Museum’s Mallard 75 series of events and activities, of which HRH The Prince of Wales is Patron. Its record still stands today and is testament to the engineering prowess in Britain at the time.

Mallard was designed by Sir Nigel Gresley, who was born in Edinburgh, raised in Derbyshire and educated at Marlborough College. In 1920 Gresley was awarded a CBE and in 1936 was awarded a knighthood by King Edward VIII and an honorary DSc by Manchester University.

Gresley is widely regarded as one of Britain’s most gifted locomotive engineers and rose to become Chief Mechanical Engineer (CME) of the London and North Eastern Railway (LNER). Gresley’s A1 design, Flying Scotsman, was the first steam locomotive officially recorded as travelling at more than 100mph (the locomotive was later rebuilt as an A3). The A4 class was designed to routinely travel at this speed and was created to head up the ‘Silver Jubilee’ ‘Britain’s first streamlined train’.

The service was introduced in September 1935 between London and Newcastle, via Grantham and was a great commercial success prompting an increase in traffic by over twelve per cent. It was on this service that Gresley is reported to have travelled on in the rear luggage van and having ordered an emergency brake application at 95mph was horrified at the results. He decided that a new ‘quick acting’ brake was needed to cope with the demands of slowing a train from high speed quickly, by acting on all the brakes along the length of the train quicker than a conventional brake.

The first trial of the new brake was on Sunday, 19th October 1936 on a train hauled by 2510 Quicksilver. Inspector Sam Jenkins was on the locomotive for this test which established that the brakes did indeed act more quickly – over thirty per cent more quickly. The work on the development of the brake went on for about two years, generally being tested on the East Cost Mainline from King’s Cross through Lincolnshire to Peterborough. By the summer of 1938 the quick service vacuum brake valve was ready for LNER approval. The record-breaking run was done under ‘cover’ of being part of the trial of the new ‘quick acting’ brake. This was fixed for a Sunday in July 1938.

On that day Mallard had its regular crew of driver Joe Duddington (known for driving hard when it was required and having had Mallard from new four months before), fireman, Tommy Bray of Doncaster Shed and inspector Sam Jenkins of Liverpool Street. In the dynamometer car was Gresley’s personal assistant, Bernard Adkinson from the locomotive running department. Also, Dennis Carling the LNER test inspector who recorded mile posts and bridges to record the train’s location.

The train left from Wood Green waterworks sidings on its outward journey. It went as far as Barkston and turned on the triangle there. Packed lunches were eaten at the siding in Barkston and at this point Jenkins and Bray made the fire up – right to the doors of the firebox, paying particular attention to build up the corners of the firebox, difficult to reach underway, and especially if firing not through the open door, but ‘over the flap’ as was normal practice at the time.

The train left Barkston South Junction at 4.15pm. From there it entered Peascliffe Tunnel – 967 yards which is still on a rise but after this the line levels out and crosses Barrowby Road Junction before going through Grantham. Here there was permanent way work happening which meant the train slowed to 24mph. Then from Grantham to Stoke Tunnel up Stoke Bank, on through Great Ponton station and onto a junction which had two lines leading to the Northampton ironstone mines. At High Dyke it would have passed under a distinctive LNER lattice girder ‘gantry’ signal, still working hard. Stoke Tunnel is 880 yards and the line rises through it. The train lights were not switched on, so the dynamometer car was briefly plunged into darkness with red-hot coals falling either side briefly, before the guard turned on the lights. At Stoke summit Mallard was running at 74.5mph. Within six miles of the summit, with the help of gravity, the train was running at 116mph.

Duddington was interviewed in 1944 by the BBC and recalled passing Stoke Box at the top of the climb at 85mph after which ‘I gave Mallard her head and she just jumped to it like a live thing. After three miles the speedometer in my cab showed 107mph then 108, 109, 110 and before I knew it the needle was at 116 and we’d got the record. They told me afterwards that there was a great deal of excitement in the dynamometer car. ‘Go on old girl’ I thought, ‘she can do better than this’, so I nursed her through Little Bytham at 123 and in the next 1¼ miles the needle crept up further, 123½, 124, 125 and then for a quarter of a mile while they told me the folks in the car held their breath – 126mph.’

After the Stoke Tunnel the line passes through another deep cutting – with rock sides, as this is limestone country, and then over an embankment. Then through Corby station and another deep cutting. Just before Little Bytham it passed under the LMS line to Spalding on a lattice girder bridge. By the time the train went through Little Bytham it was running at over 120 mph. The maximum speed was reached at milepost 90¼ just before Essendine seconds later at milepost 89¾ steam was shut off and a brake application made at over 120mph. As the train ran at over 120mph between milepost 92 and 90 they had clearly (and by a considerable margin) beaten the record by railway rival, the LMS.

Driver Duddington did a brake application which was felt in the train. At Essendine there was a junction with the line to Stamford, and immediately after a cutting the first of a number of level crossings as the line dropped towards the Cambridgeshire Fen.

The train coasted through Tallington where the LNER staff had a conference as to what to do on arrival at King’s Cross. The chief civil engineer later remarked that had he been asked he would have been against the run as some of the rails near Tallington were of the 40ft type laid in 1910.

Mallard was taken off the train at Peterborough and went to New England shed where the white metal in the bearing was replaced. It was later to return to Doncaster under its own power. At the station, a standby locomotive took over and it was reported that ‘Tommy Bray was grinning from ear to ear and I am told very soon polished off enough beer to match his hectic work with the shovel.’ Sir Nigel Gresley was called at home and given the news that the record had been broken.

As the record breaker, Mallard was treated with the dignity that befitted its world-famous status. It had already been decided that it would be part of the National Collection and before its last journey from Top Shed at King’s Cross in 1963 it was lovingly polished so it would look its best. Like all locomotives to be withdrawn it returned to the place it was built, and upon withdrawal at Doncaster Works on 25th April 1963 the process began, to restore it back to its 1938 garter blue livery and condition ready for preservation as the locomotive that broke the world speed record.

This year marks seventy-five years since Mallard broke the world speed steam record for traction and the National Railway Museum in York has spent the past year getting ready for its ‘Mallard 75’ celebrations. Thirty-five class A4 locomotives were built with the last A4 being withdrawn from service in 1966 – only six now remain. Two have recently been repatriated from the United States (Green Bay, Wisconsin) and Canada (Montreal) and been treated to a cosmetic overhaul for the occasion. On Wednesday, 3rd July, seventy-five years to the day and for two weeks, all six locomotives will be reunited around the turntable at the museum in York – a sight never seen before.