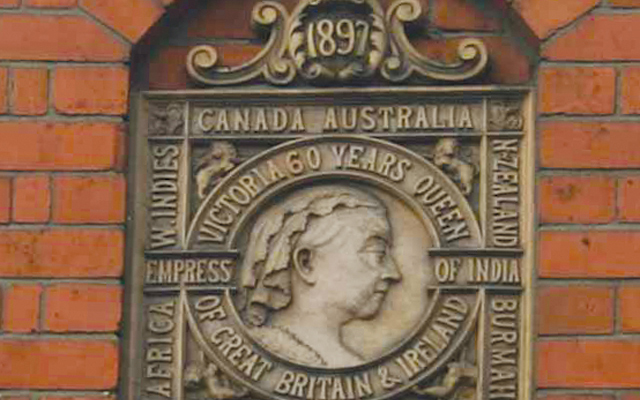 A small tribute to our first Diamond Queen

High on the gable of a building in Rasen Lane, Lincoln, is a terracotta plaque. At such a height it is difficult to appreciate the detail but the profile head of Queen Victoria and the date 1897 on a scroll above reveal this to be a Jubilee memorial plaque for our first Diamond Queen.
The buff coloured plaque, sited in an arched niche, stands out boldly against the red brick of the building. Manufactured by Stanley Bros of Nuneaton, these plaques were first produced for Queen Victoria’s Golden Jubilee a decade before; examples of these earlier plaques can still be seen in East Anglia and on the south coast. With colours ranging from buff to red terracotta, some plaques carry a border made up of twelve separate pieces.

For the Diamond Jubilee the date scroll, which was not part of the plaque itself, was remodelled using a different style of numerals. However, it seems likely that the original mould was adapted for use for the main plaque, the 6 of sixty being thicker than the 5 of fifty on the earlier plaques.

The design celebrates the extent of Queen Victoria’s influence around the world. A circular inscription declares ‘Victoria, 60 years Queen of Great Britain and Ireland’ while a central banner proclaiming her Empress of India records the title she assumed in the 1870s following the ending of the role of the East India Company in that region in the 1850s. Around the edge of the plaque further countries of the empire, large and small, are listed including Canada, Australia, Malta and Gibraltar. Symbols of royalty complete the design.

The earlier 1887 plaques were of solid construction but the 1897 version had a partially hollowed back, either to reduce weight or to aid fitting to the buildings. Examples of the plaques were on show at a Building Exhibition early in 1897 and they were described as: ‘A Diamond Jubilee Panel. Messrs Stanley Bros Ltd of Nuneaton, have designed a very effective Diamond Jubilee panel in terracotta, which Jubilee houses and memorial buildings will hardly be complete without the use of. The panel was shown in the excellent stand erected by Messrs Stanley at the Building Exhibition, and has a clean and striking appearance. The measurement is 24 by 24, being made in buff and red terracotta, and also in glazed ware.’

Unlike many memorials to this great event, the plaques were not generally placed on major public buildings but were designed for use on any building being erected between the June celebrations and the end of the Jubilee year. This was a time of extensive building activity with streets of housing springing up around our towns and cities and Lincoln was no exception. The building in Rasen Lane has a shop on the ground floor and, being a corner plot, was ideal for the display of such a tribute. Stanley Bros had access to a range of different coloured clays and manufactured the plaques to blend with most local building materials. However, the builder has chosen to make more of a feature of the plaque by using a buff-coloured plaque on a red brick building, further enhancing its appearance by placing it in a niche rather than simply employing an additional border.

The late Arthur Sadler, who researched the plaques back in the 1980s, producing a list of remaining plaques around the country, did not record any examples in Lincolnshire and this may not be the only example within the county. Some examples he listed elsewhere have since been lost but quite a few additional plaques have been discovered around mainland Britain and no doubt more remain to be spotted. It is worth checking any area where building was being undertaken in the Jubilee year. The majority of plaques found have been on private housing in towns and cities but a few were placed on pubs, village halls and shops.

Redevelopment and other factors have led to the loss of some plaques, although some have been preserved in museums. Sadly the manufacturer, which is no longer around, had no records of how many of the plaques were produced and during Arthur Sadler’s investigation were unable to find the mould in their store. A further mystery surrounding the plaques is their cost as, again, no records remain. Maybe among the documents of a property adorned with such a plaque this may come to light.

In some areas plaques have been painted, either in a single colour to make them stand out or in several colours, often highlighting the lettering in black. However, the inscription, even on painted examples, remains crisp and clear, a tribute to the skill of the original craftsman and the mould maker. These Queen Victoria Jubilee plaques reflect the mood of pride and celebration of the time. It would be a pity to overlook these tributes to a favourite and influential monarch who, like our present Queen, dedicated a long and eventful life to the service of her people.