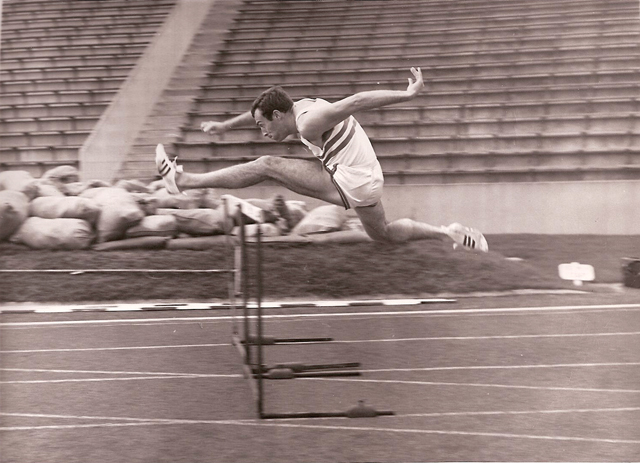 Chastised by his headmaster for not taking his academic work seriously enough, and assured that he would never ‘earn a living from sport’, former Olympian and sports commentator Stuart Storey is having the last laugh now.
Known for having one of the most recognisable voices on television, Mr Storey began his own sporting career as a young schoolboy when he competed in a number of events, excelling at the 110 yard hurdles (equivalent to today’s 110m event).

He went from winning the All England Schools Championship in 1959, having been the slowest in his heat the previous year, to representing Great Britain in the 1968 Olympic Games and the 1970 Commonwealth Games. He was also the British record holder in the 200m hurdles.

Born in Louth, Mr Storey moved to Holbeach with his parents, where his father ran a garage on Barrington Gate. He was educated at Spalding Grammar School, where he recalls he was frequently called to the headmaster’s office for not taking his studies seriously.

He said: “He’d call me in and tell me I’d got to knuckle down to my academic studies as I wasn’t going to earn a living through sport. And 99 times out of 100 he was right. I went back as a guest speaker for a prize-giving ceremony some years ago and I was able to relay that story!”

After leaving school Mr Storey studied to be a PE and maths teacher at Loughborough Training College, which had its own strong athletics contingent. After taking up his first teaching post in Amersham for a couple of years, he moved to America in 1967 to complete a masters degree in education and continue his athletics training.

He qualified for the 1968 summer games in Mexico City along with other high hurdlers, Alan Pascoe and Mick Parker. Remembering the event, he said: “It was a high altitude games and we were amateurs in those days; we never really had a lot of opportunity to run on synthetic surfaces.

“I didn’t get into the medals – I just missed out on the semi-finals by one one hundreth of a second; in fact none of us went through.

“The things that stand out for me from those games though, were watching David Hemery win the gold medal for Great Britain in the 400m hurdles. We also got the bronze in that event with John Sherwood.

“The other outstanding thing for me was that I was stood right next to the pit when Bob Beamon made his long jump world record – that was a great sporting moment. I was commentating on the 1991 Tokyo World Championships when Carl Lewis and Mike Powell both broke that record.”

By 1970 Mr Storey had met his wife Shirley, who was an international basketball player, and it was through her that he ‘accidentally’ landed a sports commentary job with the BBC.

Mr Storey said: “I was asked if I’d come along and introduce the team and do some courtside commentary for the first time a British team had competed in the European Club Championships, so I said I’d give it a go.

“Someone from the BBC was in the audience and afterwards Ron Pickering gave me a ring and I got an invitation to do an audition. And to this very day I still don’t know the results of it, whether or not I got the job! But that was how I got into television. The first Olympics I covered were in 1976, I’d already done the 1974 World Championships in Rome.”

And since then Mr Storey has covered nine summer Olympiads for the BBC, but 2012 is the first time his voice won’t be heard by the British public; for the last few years he has been working for IMG Media, covering Athletics Diamond League events. However, he will still be commentating on 2012, working for the Olympic Broadcast Service (OBS), providing a world feed for those who are not coming to London but are English speaking.

Mr Storey is thrilled the country has won the bid to host the games, adding there is nothing like the Olympics and the feelings it creates.

He said: “The world championships just don’t have the same kudos as the Olympics. I remember interviewing Greg Foster who won four world titles and an Olympic silver medal. I asked him if he’d swap those four for an Olympic gold and he replied ‘of course’, that’s just how much they’re thought of.”

But ask him who his tips are for the medals this summer and he won’t be drawn, saying he never speculates on the outcome of an event, as it’s not his place to do so. His role is to tell the viewer what the picture does not say.

He added: “From the 2007 World Championships in Osaka there were twenty champions competing in the Beijing Olympics in 2008 and only five of them went on to win gold; with the Olympics you just cannot tell what’s going to happen. New people come out of the woodwork and you just never know – it makes it all very interesting.”

During his career Mr Storey has commentated on a vast number of different sports as well as athletics, including triathalon, swimming, table tennis, judo, netball and speed skating to name a few. As well as competing and commentating, he is also a successful coach, having worked with fellow former Holbeach resident Geoff Capes, who represented Great Britain at Olympic level in the shot put, and Olympic decathlete, Daley Thompson too.

Now living in Hertfordshire and married to Shirley, Mr Storey has two children and three grandchildren. His sons, Ben and James have both inherited his sporting prowess, with both excelling at rugby, while James also followed in his father’s footsteps by winning a silver medal in the All England School’s Championships.

Mr Storey still returns to Holbeach, a place he describes as ‘full of fond memories’, when he can and keeps in touch with a number of old friends. He also dedicates a lot of his time to sporting charities. He is a patron of SPARKS, a Variety Club member and a trustee of the Ron Pickering Memorial Fund. He is also chairman of the board of directors of the Wodson Park Trust in Ware, where his drive has helped establish a large sports complex for the benefit of the community.