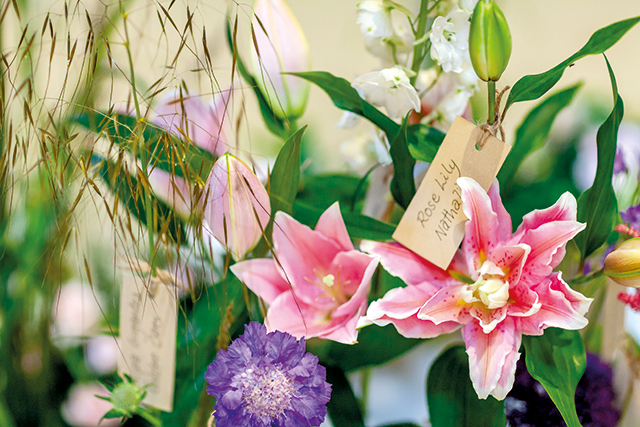 A week at the museum

British Flowers Week is the brainchild of New Covent Garden Market and aims to encourage more consumers to purchase British flowers and plants. Helen Chambers from Evolve Flowers Ltd, Donington, was one of six finalists challenged to create an installation to be displayed in the Garden Museum in London. She tells Lincolnshire Life about her week-long experience.
Being based in Lincolnshire and having worked for several growers during my thirty-year career in the flower and plant industry, I thought it would be an interesting challenge to create the large-scale design and promote British growers at the same time. In Lincolnshire we are so lucky to have such great growers just around the corner, it was just too good an opportunity to miss. Did I know what I was letting myself in for? Probably not!

Firstly, when doing competitions of this scale, it is important not to wander off the brief: how easy it is for creative types to be distracted by the beauty of flower and plant material. The display was to be 1.5m wide, 2m long and 3m tall. The brief stated that the design had to use all British flowers and plants and had to last for five days – and no floral foam could be used. Okay, no small test tubes then! Since we also had to link the theme of our design to the Museum, some further research was required.

The Garden Museum was founded by Rosemary Nicholson in 1977 in order to rescue the abandoned church of St Mary’s at Lambeth, which was due for demolition. The church is the burial place of John Tradescant (c1570–1638), the first great gardener and plant-hunter in British history. His magnificent and enigmatic tomb is the centrepiece of the Sackler Garden, designed to reflect Tradescant’s life and spirit. Since 2015 the Museum has undergone major development. It now has even more to offer, with two new learning spaces, new galleries including The Ark Gallery – a recreation of the Tradescants’ cabinet of curiosities – and the medieval tower has been opened up to the public for the first time this year.

Whilst researching John Tradescant, I discovered that he had been gardener to Henrietta Maria, the wife of King Charles I, who was also known as the Rose and Lily Queen. Perfect, this would enable me to use the multi-petalled, pollen-free Rose Lilies grown by fifth-generation Smith & Munson, lily growers based at Long Sutton. I’d had my eye on these for a while, would they be ready in time?

The research continued and I discovered that John Tradescant was ‘probably’ born in Suffolk and there is some evidence to suggest his birthplace was Corton near Lowestoft. Coincidence? I most definitely do originate from Lowestoft! This caused me to reminisce about my childhood, lying in the fields at the bottom of the garden, chewing on a blade of grass and watching clouds passing by – the story started to evolve. The design takes the observer on a journey through the hay meadows, with grasses swaying in the summer breeze. The petal shapes of the lilies echo the shape of the majestic arches in the Museum. The feature of the design that would hold the water sources for the Rose Lilies and other British flowers used would be constructed from hay mats. The search continued to find meadow hay, which is normally cut in June. Most florists, when making hay mats, go to the local pet store. We were going to need a bit more than that, so again more research was needed. I discovered G W Ticklers, based in Bourne and the largest hay and straw producer in the county. It was all coming together.

The framework of the installation had to be constructed from metal, so as to withstand a ‘light push’ and be stable enough to hold the weight of water and flowers. Art Metal Engineering based in Moulton created the Fibonacci spiral that would have the hay mats attached to it. My husband, the very handy Mr Fixit, is a carpenter so he took over from here ensuring the base was stable and uprights secure. The hay mats were then constructed from copper wire and sewn onto the frame. Yes I did say sewn; this part of the process seemed to go on for weeks. “When do we get to work with flowers?” was the daily plea.

Finally the base was constructed – and just about fitted in the van. All the meadow flowers arrived from Flowers by Clowance. They gather products from around twenty growers in Cornwall. Beautiful soft lilac Scabious, Californian Bluebells on 60cm long stems, stunning purple Trachelium and soft dusty pink Astrantia along with pink Snapdragons and blue and white Veronica. Pink Infinity Roses and miniature moth orchids, aptly named Sunshine, were sourced from Double H Houseplants in Hampshire. The company grows 4.5 million houseplants every year for UK supermarkets.

We went to local growers Multiflora in Boston to crop Astilbe and then on to Naylor Farms, Moulton Seas End, to crop Delphinium. The Delphinium was almost as tall as me! These field grown crops are normally all destined for supermarkets. The logistics and store display determine the length of the product, so normally they are cut down to a fraction of their length and end up around 60cm but we needed height for The Spiral Meadow, so we were very grateful to have a ‘pick your own’ agreement!

What about the Rose Lilies? Just in time they were ready to crop. They had a great deal of eyes on them, willing them to be ready in time. The weather was simply just too cool and if they are cut too early the flower doesn’t develop properly, so they had to be perfect and at the very last moment they were able to be cropped and conditioned in huge bins of water – rather unfitting for such a majestic bloom!

A few days later, with the van crammed with Britishness, we were off to London to build the construction. We left at 2am and called into New Covent Garden for a few more British products and then on to the Garden Museum. Construction was well underway when we were politely asked if we could come back again tomorrow at around 4.45am. We were told the BBC might be coming along to film… At this point a lie down in a dark room and a very large G&T were the only things on my mind – and I’ve been teetotal since 2004!

Of course we went back to Lincolnshire and of course I got up and left at 3am to get to London again. I arrived at the Museum and popped on my apron before checking the display. Finally a proper look at the flowers and after a few hours’ sleep I was so proud and pleased with the huge efforts that my team and all the growers had put in to get us this far. Carol Kirkwood from BBC Breakfast was interviewing one of the other competitors and then went on to talk about the pollen count and the weather. Impressed! Extremely well-choreographed and at a significantly faster pace than the Gardeners’ World presenters at RHS shows.

In the blink of an eye it was my turn and the next thing I know, friends are sending messages saying ‘Hey, WOW, we just saw you on BBC Breakfast’. At that point I pinched myself to see if I was still asleep. Carol was lovely and we managed a few photos for social media to further publicise British Flowers Week. It worked too, as around four times the normal footfall to the Museum for a Tuesday came in. What a joy to see the public’s reaction, they loved it.

On Thursday we were back again, this time we let the train take the strain and were joined by some of the growers. This was the day we were to find out who was the winner and meet The Duchess of Cornwall. Stephen Munson and I went into the Nave to await the Royal arrival. The Duchess stood in the middle of The Spiral Meadow and sighed. “Beautiful,” she said, “I would like to have a chair and sit here for the rest of the day, watching the grasses and the flowers, so relaxing.” Then Alan Titchmarsh whisked her away to meet Floral Angels, the flower re-purposing charity.

I was elated by the Duchess’s comments, this was the best ever reaction and the team were all thrilled to have had received such an accolade.

On returning to Lincolnshire, still on a huge high from a whirl of a week, and inspired by Floral Angels, the Evolve team made all the remaining flowers and plants into a ‘pop-up shop’ give-away at Springfield’s Gardens in Spalding. We raised £216 for Motor Neurone Disease Association. Although we didn’t win the competition, taking part was better than any prize! 