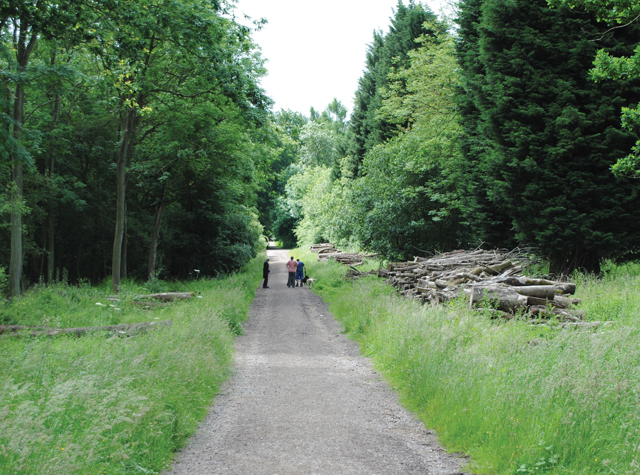 There has probably been an extensive area of woodland in the gentle hills to the west of Bourne for thousands of years.

The fact that Bourne Wood lies in the ancient Kesteven division of Lincolnshire is interesting in itself. It is thought by some that this name might in part derive from the Celtic word for ‘wood’ – ‘ced’, which is ‘coed’ in present day Welsh. The last part of the name of Kesteven could also derive from the Old English word for a meeting place. So taken together, we might say that Kesteven (and by association Bourne Wood) means ‘the wooded meeting place’.

Either way, the woodland today is indeed a fine place to meet and forms part of the Kesteven Forest in south- west Lincolnshire, an area of broken and mixed woodland stretching between the towns of Grantham and Bourne. It is administered by Forestry Commission England, who are in the process of returning the woodland to something like its native state, consisting predominantly of broadleaf deciduous species, such as oak, ash, maple and birch, reducing the number of imported conifers.

You can get to Bourne Wood by road following the A151, either from nearby Bourne, Stamford, or via the A1 from Colsterworth. From Bourne, the entrance is on the right hand side following some winding, undulating bends. There are two signs leading up to the entrance, testimony to how easy it might be otherwise to miss it. The woods can also be accessed on foot from Beech Avenue in Bourne.

Once off the road by car, you follow a relatively long but well maintained track to an extensive car park and picnic area in the central southern area of the wood. Here, I was immediately impressed by the sheer peace and beauty of the woodland scenery, the great variety of flora and fauna. Bourne Wood is home to over fifty fallow deer, introduced a few decades ago. There is also the more solitary muntjac deer to find, originally brought into England from Asia in the early 1800s by the Duke of Bedford. Due to the muntjac’s shy nature, however, you are more likely to hear its sharp call than catch a glimpse of it – but you never know.

There are many woodland species of birds, like nuthatch, redpoll, siskin, chaffinch, dunnock, great tit, blue tit, long-tail tit and the nightingale. By the ponds you might also see a heron or even catch a glimpse of a kingfisher. While I cannot promise that you will see all of these, the visitor should at least be aware of the presence of some. Being woodland, it would be advisable to take a pair of relatively low magnification binoculars to get the most out of your visit, preferably no stronger than x8. I also found it useful to listen to bird species’ calls online or on DVD, purely to familiarise myself with the variety of song. Woodland by its very nature can make bird identification by eye quite difficult. The most clever bird, however, cannot disguise its call!

The list of flora found in the woods is equally impressive. Of the many interesting species are the midland hawthorn, meadowsweet and wood spurge. And there are still, surely, few finer sights than a foxglove rising out of a woodland glade in summer.

One of the best aspects of Bourne Wood is its accessibility. There are many miles of extensive tracks, public footpaths and bridleways. For cyclists, the Lincolnshire Cycleway runs right through the wood, south to north. It is also a great place to walk your dog but you must, of course, remember to be responsible. There are also some interesting woodland sculptures to enjoy and a play area for the children. ‘The Friends of Bourne Wood’, a voluntary organisation which helps promote and look after the wood, has a very informative website (see below) where a map can be downloaded. It also organises all-year-round activities in the wood for people of all ages.

Considering the sheer size of the area, it would be advisable to allow yourself several hours for your visit. A picnic would be a very good idea, not merely because there are many places in which to shelter from the odd shower.

That Bourne and its woods are special is beyond question, not only because it is one of the few remaining areas of ancient woodland in England. It is quite fascinating in geographic and geological terms, too, being the natural cleft between the extensive fens to the east and the hilly limestone region to the west and south. Bourne effectively bestrides both landscapes, which have historically required a totally different kind of agricultural management.

An example of the kind of care Bourne Wood needs today became evident to me on my visit. I came across a fallen ash tree right across my path, being dealt with efficiently by some Forestry Commission workers, part of the kind of general maintenance an important area of woodland like this requires. While taking a short diversion around the stricken tree, I was told that the ash is susceptible to splitting and falling in such a manner.

The town of Bourne itself is well worth a visit if you have time. Its name reputedly derives from the Old English word for water, or a stream which arises from a spring. There is indeed a spring in this little town, which was spreading out before me after I left the woods by car. Ahead of me, stretching as far as the eye could see eastward, was the vast expanse of the fens. Suddenly a line from Shakespeare’s play ‘Antony and Cleopatra’ came to me, a play which I had studied many years ago at school: ‘I’ll set a bourn how far to be beloved.’

It occurred to me that this could be another potential meaning for Bourne and its woods, a place bestriding two landscapes – a boundary between the fens and the more wooded upland areas of Lincolnshire. In both of these, what is there not to love?