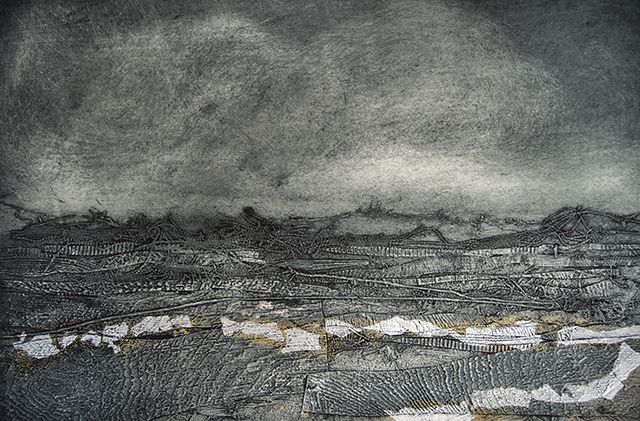 Abstract art of a printmaker

Looking for a new creative outlet, Sinclair Ashman was drawn to the art of printmaking and after a summer residency in the US, he’s keen to share what he’s learnt with artists back home in Lincolnshire, as he tells Kate Chapman.

A graphic designer by trade, Sinclair, who moved to Horncastle from London ten years ago, has always been passionate about the creative arts but the gift of a printmaking taster course from his wife Jennie back in 2013 sparked an exciting new interest.

He says the magic of printmaking made an immediate impression on him and since then he has embraced the collagraph technique, experimenting with his own ways of making plates and using a variety of different materials to create his abstract works.

This summer, his interest took him overseas to America where he was able to promote his own work in New York and visit several of the specialist printmaking workshops in the Chelsea cultural quarter before embarking on a two-week residency at the Center for Contemporary Printmaking in Norwalk, Connecticut.

“I like the immediacy of printmaking and this particular technique which I’m using is quicker than linocuts or etching. Also, there are no acids involved, which means that I can easily make plates at home,” says Sinclair.

“Over in New York there are a large number of printmaking studios all located together in one place – there’s nothing really like that here in the UK. Although there are many dotted around the country, there’s no real concentration.

“It seemed the ideal place to visit and find out more from doing a residency. That way I could bring back what I had learnt to Lincolnshire, with the aim of forming a Lincolnshire Printmakers Group, which could produce and show its own work around the county.

“It was a great experience and since I’ve been back I’ve found two or three other printmakers who are interested in a forming a group, so we’ve started some discussions.”

Before moving to Lincolnshire, Sinclair worked for graphic design agencies in London, where clients included companies such as Shell, Tesco, Rolls-Royce and Severn Trent. He then spent ten years teaching on the BA (Hons) Graphic Design course at the University of Lincoln, a role he has recently given up so he can concentrate on printmaking alongside his own graphic design agency Reverse Design.

Sinclair enjoyed a keen interest in landscape and abstract photography for several years, even exhibiting his work in London and other UK locations, but after taking it as far as he could he decided to look for another way to harness his creativity.

“I suppose I got a bit bored with it, and my wife, sensing that I was looking for something new to do bought me a stained-glass window day-course taster as a birthday present,” he recalls.

“But when I nearly burnt my hand, it put me off a bit. Also, I didn’t really connect with it in a way I’d hoped I would. Six months later she bought me another taster course, this time for printmaking at the Ropewalk, near the Humber Bridge.

“And that’s where I found what I was looking for, something for me, where I could do what I wanted, something that would give me much more creative freedom, compared to the inevitable restrictions of my client-led design work.”

Sinclair uses the collagraph technique to create his abstract prints. His work is inspired by everyday items and the surrounding landscape, while for him a successful print evokes a feeling of interest and intrigue – it’s not about perfection.

“For collagraph I use birch plywood and stick materials to it; and it’s all about the different textures. These create areas of light and dark in print.

“I’ve used everything in my work – fabric, matchsticks, leaves from the garden, pretty much anything goes. I stick them onto the surface of the board, seal them with varnish. When the plate has dried, I ink it and run it through the press.

“I love that it’s a quick process and if something isn’t working then I can change it or go on to something new.

“I’ve experimented with various ways of making plates too – dishcloths, plastic fruit bags, household filler, leaves and twigs, varnishes and plastic washers and layers of card have all been used to create printing plates. On the print side, I have explored the use of metallic inks, large print sizes and embossings.

Sinclair sells his pieces via the website artfinder.com and at print fairs such as Printfest, held in Cumbria, and the Woolwich Print Fair where he’s been invited to exhibit for the second time.

He also has pieces in a Yorkshire gallery and has an exhibition planned at the Sam Scorer Gallery, in Lincoln, in 2020.

“My trip to New York was really enlightening; as well as promoting my own work, I wanted to visit other printmakers to see how they run their studios and how they create an income, as well as exploring the creative side,” adds Sinclair, who works from his own home studio.

“I wanted to bring that all back to Lincolnshire to see how we might go about doing something similar here.

“From the discussions we’ve had so far it might be that we look to form a group which shows in different places – there might not be just one location for it – we might be a showing group.

“As well as being creative it needs to be well organised, with a clear direction, so in the coming months we’ll be looking at various models of operation to see which one works best for us, and hopefully there will be some other printmakers interested in joining in with what we’re doing too.”

Any other Lincolnshire based printmakers who would like more information about joining the Lincolnshire Printmakers Group can email Sinclair at sinclair@sinclairashman.com.

To find out more about Sinclair Ashman and his work visit www.sinclairashman.com