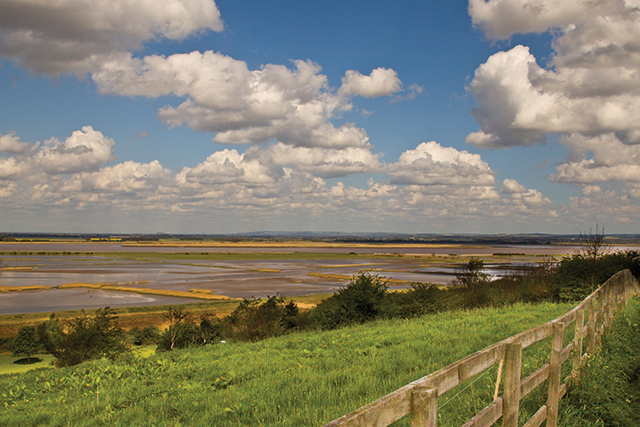 If you follow the Lincolnshire Limestone Edge, following the spring-line of villages, you come to the village of Alkborough, tucked away in the last corner of the county.
Alkborough nestles on the escarpment overlooking the confluence of the Trent, the Ouse and the Humber; where the Trent Falls flow into the river and the Humber draws off one-fifth of the country’s fresh water.

In Domesday Alkborough is recorded as Alchebarge: ‘the ridge-like cliff above the mooring pool of the river.’ Legionaries would ford the shallowest stretch of the Humber at Whitton (a hoard of Roman coins was found at Walcot). A fleet of some 300 longboats carrying 9,000 men are said to have sailed up the Humber on their way to the Battle of Stamford Bridge in 1066. And during World War Two the Humber would be the last desperate corridor for the Luftwaffe on their way home to the Fatherland.

St John the Baptist church is on record as far back as 1052; it stands upon a walled-up mound, suggesting it has been central to village life since pre-Christian times. The tower is of Saxon origin and there are signs of Norman influence. The church was built with stone extracted from the great quarries at Caan in France – the selfsame stone used to build our great cathedrals.

There is a local legend that three of the four knights who murdered Thomas a Becket took refuge here and, as a penance, did much to restore the building.

If you lift up an iron ring set in a heavy capping stone in the church floor, an Anglo-Roman trellis-patterned stone is revealed. The stone is thought to have belonged to either a pre-Christian temple or even a Roman watchtower overlooking the flatlands of the Trent valley and the vital river junction. There would be no better vantage point for the new overseers; in fact, a retired sea-captain built the three-storey Tower House on Back Street as his very own Crow’s-Nest.

The church clock, built at James Harrison’s workshop at Barton-upon-Humber, was presented to the parish in 1825 by Marmaduke Constable, of Walcot Hall, and would have cost around £200. It is based on a design by his forebear John Harrison of Barrow-upon-Humber who invented the marine chronometer, which solved the age-old riddle of pin-pointing a ship’s longitude out at sea. The clock is currently maintained by Alkborough clocksmith John Ablott:

For a Church clock to keep time within one minute a week is quite an achievement when one considers the extreme conditions of heat and cold, wind, rain and ice on the hands, enough to stop an ordinary clock. But ours is no ordinary clock, it is perhaps the very first of its type ever made!
‘Alkborough Parish Clock’ – John Ablott (MBHI)

Mr Ablott says there is evidence that the Alkborough clock was a prototype, and one that received due recognition. In The Transactions of the Society of Arts, 11th January 1830: ‘The large Silver medal & Ten Pounds were voted to Mr James Harrison of Barton upon Hull (sic) for his Escapement for Turret Clocks, and the Silver Isis Medal and Five Pounds were voted to the same Artist for his Expanding and Self-regulating Fly…’

The oak reredos behind the altar was made by the famed ‘Mousey’ Thompson of Kilburn in Yorkshire; Thompson’s trademark mouse is carved onto the right-hand upright.

There are two wall frames opposite the church doorway as you enter, listing every vicar since 1220! Before this time monks of the Abbey at Peterborough and later the Priory of Spalding tended the local flock. There was a Chapel of Easement at Walcot as well as a Leper hospital.

One of the wall frames tells us that in 1565 churchwardens Michael Robinson and Christopher Baldwin ‘destroyed and abolished from the church everything connected with popery’. One story goes that a ploughman was ordered to wear the priest’s vestments ‘for sacrilegious purposes’; that is to say, he had to wear them when he was out in the fields. He found the coarse cloth unbearable in hot weather though and protested.

In the churchyard there is the worn and undulating stump of a Saxon cross, looking like a well-gnawed stick of liquorice. Because this consists of Yorkshire Millstone grit it has been as popular as a salt-lick in ages past for sharpening and honing everything from sickles and scythes, to knives and swords; a pair of deep long grooves attest to the sharpening of whole quiverfuls of arrowheads.

There are also a number of deep piddock-like holes in the church wall. These are said to be from musket shot fired during the English Civil War. Stuart Brand, the Churchwarden, tells of how people were doubtful about soft lead shot ever penetrating to such a depth but then he managed to extract lead from one of the holes. The shots are grouped in such a way as to suggest that their target was actually using the Saxon stump for cover – modern forensics would confirm this within seconds!

When the church tower was undergoing renovation the stonemason is said to have modelled one of the four gargoyles on Mr Brand himself. Was the man aware that this is an age-old tradition? The master masons who built the great cathedrals back in the Middle Ages would often play the same ‘joke’ on their workmates, who are captured in stone to this day.

The church is used as a recording studio by two classically-trained pianists from Walcot. Recording sessions are conducted in the early hours as noise seepage from daytime traffic and birdsong can be a problem, although – owl-song aside – the acoustics must be superb.

St John’s attracts visitors from as a far away as America; on one of my visits several cyclists in Lycra and fluted helmets were keen to spot the Thompson ‘mouse’.

Every village has its mill; Lincolnshire once boasted 800! The old mill on West Halton Lane is now part of a family home. Everyone in the village would keep pigs and poultry at one time, so they grew barley, which would keep the mill in constant usage. Within living memory, boys would be sent with a wheelbarrow for the odd sack of flour. Edward Kew was miller from 1885 to around 1916. The exterior mechanism was damaged in a storm in 1914; this was replaced but suffered further damage in 1921, so Charles Hewitt bought an oil-powered engine and carried on grinding.

A mile to the south of the village is Kell Well; an ancient spring issuing from the hillside, rich in iron salts; a sign of the ore that established the local iron and steel industry.

Alkborough is best known for the turf maze known as Julian’s Bower, which nestles in a hollow tilted towards the Trent valley. This turf icon is to the village what towers are to Blackpool and Paris. The maze is a draw for walkers, cyclists, school groups and families. Grown-ups stand and wonder, while giggling children wind their way dizzily to the centre and back.

The maze is forty-three feet across and, strictly speaking, a labyrinth, as mazes have false turnings, whilst a labyrinth is unicursal: that is to say it follows one route to the centre. It is thought to have been cut by Benedictine monks around 1200AD, there was a monastic cell in the village between 1080 and 1220AD; although the earliest known reference is by the Yorkshire diarist Abraham de la Pryme on a visit in 1697. It is one of only eight surviving turf mazes left in the country.

Out of eighty gothic cathedrals, twenty-two have labyrinths, although Alkborough’s is similar to the eleven-circuit labyrinth in Chartres Cathedral, which also dates from 1200AD. It has even been suggested that the maze might have Roman origins. Julius, the son of Aeneas, the mythical founder of Rome, is said to have brought maze games back following the sacking of Troy; hence the name Julian’s Bower.

In the Middle Ages labyrinths were seen as a pilgrim’s progress in the round. It may even have been used for acts of penance, with monks loading their sandals with stones. As time went on, though, it was used for more playful pursuits; in 1866 a visitor wrote of May-eve games being played on Julian’s Bower.

The maze greets you in the blue and gold sign as you enter the village, it is inlaid in the floor of the oak porch of the church, it is embroidered onto the altar cloth, illuminated in the nineteenth century stained-glass window in the chancel, dedicated to James Goulton Constable (1850–1922), and even set into his gravestone in the new cemetery.

Constable was your typical Victorian squire who served the parish well. He was behind the building of the primary school in 1874, and benefactor to the cricket club, the cow club, the coal club and the sick club.

Julian’s Bower is a scheduled ancient monument under statutory protection, owned by Alkborough and Walcot Parish Council, since being presented to the village by Lady Dudding.

The biggest event in the village’s recent history was the breaching of the Humber in 2006 in order to flood Alkborough Flats as part of a £6,000,000 flood relief scheme, and to establish a wetland bird sanctuary. It is a haven for raptors, waders, water fowl and songbirds, and a constant lure for twitchers.

Following your excursion try the Paddocks Tea Room on Back Street.