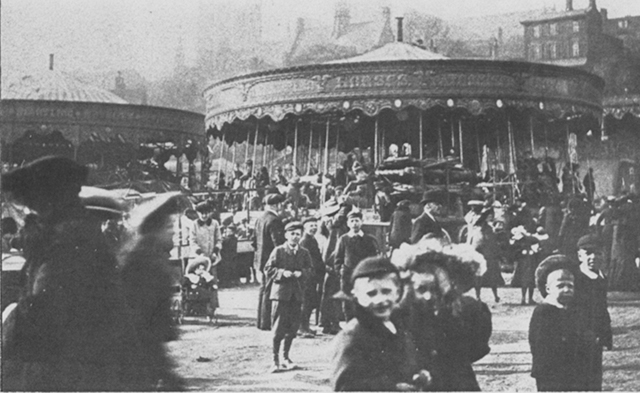 All the pleasure of Lincoln Fair

For readers of my generation, mention of Lincoln Pleasure Fair will bring back many happy memories: the crowds, the jostling, the medley of organ music, the raucous voices of the showmen and the excitement of happy young people enjoying the rides…
Young men would be demonstrating their prowess in the shooting galleries or coconut shies, with hoopla for the girls. There would also be the inevitable sideshow, a bearded lady, a couple of dwarfs perhaps, completely unacceptable now, but it was of its time. On top of that there was an almost unlimited choice of snacks, fairground rock, Grantham gingerbread, hot peas or pies, cockles, whelks or oysters and no visit to the fair was complete without sampling at least one of these delicacies.

Whether it was a fair on the scale of Lincoln or Nottingham, or a village feast like Metheringham, the fun was the same and children saved their pocket money up for weeks ahead of these events. Of course, I am talking about the 1940s and after the war people were desperate to enjoy themselves and hungry for a bit of fun.

The anticipation was amazing in the build-up period; the thrill of seeing majestic, rumbling traction engines with intriguing names like Challenger, Peeping Tom, Victory, Prince Bert and Thunderer, pulling enormous vans loaded with the amusements and with gaily coloured caravans behind. Then came the unloading and rapid erection of the large and elaborate rides, a fascinating experience for small boys who would gather in crowds often to the annoyance of the workmen. All was ready in very short order.

When the fair actually started an added attraction for young and old was the sight of gleaming, polished traction engines, which were tended with loving care and great pride and provided not only current for myriads of electric lamps but power for the rides as well as for the great mechanical organ that was the centrepiece of the entertainment. These were of great interest to many and enthusiasts would attend year after year to listen to overtures and light music of all kinds. You could enjoy a whole musical extravaganza for a day or an evening, or both, and spend little or nothing. Many did just that.

For as long as anyone can remember, Lincoln Fair has been held in the last full week of April, with a smaller one in September. In the early days roundabouts of a primitive nature were driven by hand and later replaced by horsepower. Steam power did not make its appearance until the 1870s and petrol and diesel powered engines not until the twentieth century.

Early in the nineteenth century, Lincoln’s Pleasure Fair (so called to distinguish it from the horse fair and the sheep fair, held at about the same time) was held on land known as Burton’s Paddock on Newland. It was supplemented by booths and bazaars on the old Sheep Square in Broadgate. The site was moved in 1860 to land known as Vine Close and Cheviot Close down Monks Road, but when this land was sold for houses in 1878, the fair moved a short distance westward to ground it shared with the Cattle Market and the Technical College. But the fair was always being squeezed for space as the college (now Lincoln College) sought to expand. It was finally moved to its present position on South Common in 1942.

The offer at the fair is constantly changing, the rides get bigger and better, candy floss replaced oysters, bingo replaced hoopla but there is still plenty of fun to be had at the fair.