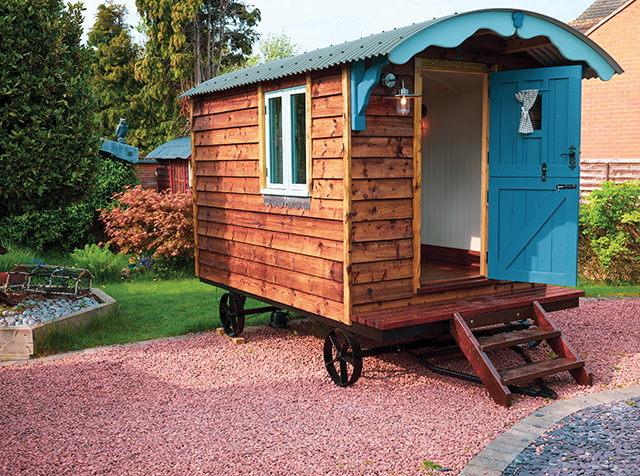 All things great and small

After a long and varied working life which has taken him from London to the Lincolnshire coast, Joe Finch is making the most of retirement by focusing on fine craftsmanship. His longtime friend Tim Ring explains how Joe balances traditional and modern designs and is supporting other local businesses, to produce his eye-catching shepherd’s huts and egg rotators.

As I walked down the path of Joe Finch’s garden towards his workshop for this interview, and having known him for 40 years, I started to assemble in my mind a list of the occupations this man has had in his 66 years.

Joe is a Londoner but is now very happily settled with his wife Carole in a nice bungalow in Chapel St Leonards. His working life started at 15 as a messenger boy based in central London, delivering telegrams to the rich and not so rich in the flats and apartments of Bloomsbury, the West End, Knightsbridge and more.

During his London life he was also a black cab driver, a milkman, a postman, a bus driver, a carpenter and general builder running his own company, a youth football coach and probably more. Seventeen years ago he made the decision to move to the Lincolnshire coast and was a local postman up until his recent retirement. Now he is a Lincolnshire craftsman.

Joe builds things in and around his workshop, which is a converted garage next to his bungalow. Converted by himself of course. The ‘great and the small’ describes what he builds. One of his creations sits on a kitchen work surface, while another might sit outside that kitchen window and be a haven for its owner. Joe builds egg rotators and traditional shepherd’s huts, the David and the Goliath of his world.

His workshop is what can only be described as a one-man, semi-organised, production line. The walls are full of tools hanging up in order of size interspersed with photographs or other memories of his London life. And wood. Lots of wood. Joe will talk about wood in a way that an art dealer might talk about an old masterpiece.

His workbench is where he makes the egg rotators, a clever device with a sloped rack that ensures that you use the eggs in order of freshness. As you remove one egg from the end of the rotator, the rest roll forward. A simple but clever device. But it is also a very well sought after device. His egg rotators adorn kitchen counters all over the world and have been seen in the background of a couple of TV shows, including one by TV cook James Martin.

Then, there is the other end of the scale in his building world. The shepherd’s hut. To the uninitiated, a traditional shepherd’s hut was used as a mobile place of shelter for a shepherd and his dog during the lambing season and while generally tending sheep. Sheep were often moved from field to field and this hut on wheels was ideal to keep the shepherd and his flock together. In those days, the hut would have had a bed, a stove and a place to sit and eat.

One of the main features of a traditional shepherd’s hut is a stable door. This allowed the shepherd to always, at the very least, keep an ear on his sheep. To endure being moved from one field to another across uneven ground, the metal base the hut sat on, as well as the axle and wheels, were made from cast iron.

These traditional huts were part of the landscape in the 1700s and 1800s, and up to the middle of the last century. As farming techniques changed, they were no longer needed. But they have seen a surge of interest in recent times as alternative holiday accommodation and as an addition to the garden. Some Londoners have been acquiring them for their gardens, as a place to write, paint or just relax – a trend set by the former Prime Minister David Cameron, who spent an estimated £25,000 on his for his Cotswold garden. A close inspection of his hut will show it is more summerhouse in appearance than a truly traditional shepherd’s hut.

However, a story in one of the Sunday supplements a few years ago inspired something in the craftsman that is Joe. While the article inspired him, he was determined to follow more traditional ways to build his huts. He starts with the base, axle and wheels. These are made of solid steel with an A-frame at the front to allow the hut to be moved and steered. The steel elements are put together for him by a welder in Mablethorpe. Showing loyalty to local Lincolnshire businesses is also important to Joe.

The construction goes through a number of phases before it is completed, including the erection of the walls, inserting insulation, cladding of the interior and laying the floor. All his wood is locally sourced. On top of the hut is placed a traditional tin roof, curved as they used to be. Joe’s neighbour Steve helps out with some of the heavy construction elements. Joe brings the hut into the modern world by using a local electrician from Mumby to provide switch plates (including un-shepherd-like USB sockets) and lighting. Lastly, and probably the part that really makes the hut both traditional and attractive, is the stable door which neighbour Steve puts together while Joe works on other elements. This stable door gives the hut a real look of the country.

Joe built his first hut four years ago and it still occupies a corner of his garden. As the years have passed the garden has grown beautifully around it, making it look like it has always been there. It is fitted with a lovely seating area with table as well as a desk under its window. The ownership of this first hut is somewhat blurred between Joe and his wife Carole. It is a discussion that few but the brave bring up. It has to be said that most of the small, decorative finishing touches such as the curtains are made by Carole and this is her crucial role with all the huts. This first hut has become a very beautiful feature of their garden and it is often admired. Not only that – it is used regularly as a place of relaxation.

Joe has now built four huts and has perfected the construction technique. His second hut headed off to Cornwall on the back of a low loader and to a very satisfied doctor. One went to the garden of a Lincolnshire lady who has a slight mobility issue. At her request, Joe was able to add a sturdy wooden rail for her so the steps up to the hut would not be a problem for her. The inside of the hut was built to her specification. One went to a local Lincolnshire school and is used every day by the pupils.

Joe builds his huts just inside the gate to his bungalow and they are always a talking point among locals and holidaymakers alike. Many stop for a chat at his gate. It is perhaps surprising that he completes any of them. The passerby who stops for a chat may not walk away with a shepherd’s hut but sometimes they may be carrying an egg rotator home. They will always be wearing a smile.

So, as I walk down Joe’s path towards his workshop, and all these thoughts are running through my head, a familiar cockney accent rings out, “Ere Tim, come and ‘ave a butcher’s at what I’ve built now.”