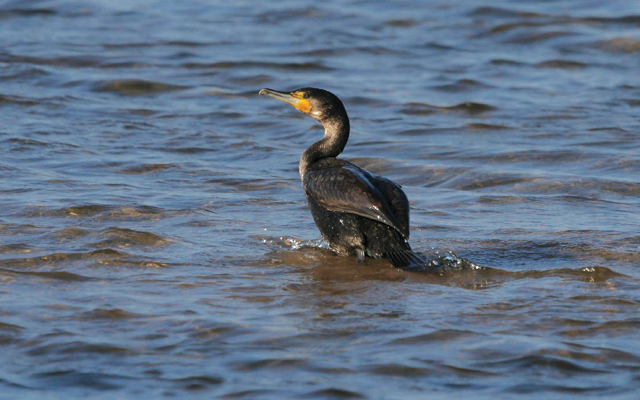 The Lincolnshire Wildlife Trust’s Deeping Lakes Nature Reserve lies off the B1166, in the south-western corner of the county. It is an area of wetland consisting of around 160 acres, parts of which are designated Sites of Special Scientific Interest (SSSI).
The reserve contains several flooded gravel pits, the largest and oldest of which was dug out in late nineteenth century. The Lincolnshire Wildlife Trust did not acquire the site until 2003 but since then clearance and restoration work has progressed steadily, helping to bring back rarer flower species like marsh orchids.

On the day I’d chosen to visit, a rather mild and relatively bright morning, I approached from the east via Crowland. The road nicely hugged the River Welland, affording some lovely views across the open water and fenland, with waterfowl evident in the river.

The entrance to the reserve lies just beyond the Deeping St James sign and might easily be missed, lying as it does on a very sharp right turn in the road. Visitors must turn left sharply at this point and then sharp right, by the reserve’s sign. You are then led along a rather long, potholed road towards the car park. On the day I was there, both the entrance road and the car park were covered in rather large puddles, evidence of recent rain and perhaps the quality of the local soils, yet still something of a surprise considering the extremely dry conditions we had witnessed in eastern England for much of the past twelve months. The car park itself is quite large, with a solid looking shelter at the eastern end. There were no refreshment or toilet facilities. As I shut my car boot, a lovely robin announced himself sitting high up in a birch tree.

I began my walk by leaving the car the way I came in, turning right, following tall hedgerows and trees along the side of the banked river. To my right, there was evidence of the continuing diverse management of this site, with birch logs stacked in piles at the edge of a copse.
Entrance to the visitor section was over a modern bridge and onto a pathway which, like the car park, was very muddy indeed and rather difficult to negotiate, even with my heavy boots.
I could have taken an alternative route from the car park, climbing the bank leading to the River Welland and completing the walk in a clockwise fashion. No dogs are allowed on the path, so the sign at the entrance told me, but I did notice in several places what appeared to be evidence of dog footprints in the heavy mud.

A hundred yards or so along the path, I came to the first hide, not a properly enclosed affair but enough to provide some shelter from rain and give a pleasant view of the lakes. From here I could see an abundance of mute swans, mallards, wigeons and coots.
From that point I entered an appreciable section of woodland; a fine mixture of native species such as hawthorn, willow and alder. There were some lovely views of the lakes from here, too, with the sounds of great tits and blue tits all around me. This led to the second hide, a fully-enclosed construction looking to the north-west over a large section of the lakes and several acres of woodland. The views were splendid and I spotted quite a few cormorants sitting high up in trees on an island, occasionally holding out their wings in characteristic fashion for the breeze to dry them. In front of the island were numerous mallards, wigeons, tufted ducks, plus a lone golden eye duck.

Walking away from this hide, the path remains in woodland, turning left along a much narrower, undulating course, giving wonderful views of water on either side. There is also a simply constructed hide along this path, facing south.

At the end of this section the route turns due south and changes character completely, entering a space of newly planted trees on ground which is slightly and refreshingly elevated. Pausing briefly, I noted two gorgeous long-tailed tits on a bare branch, quite close and seemingly unaware of me at that point. It was along here, too, that I spotted a flash of green and red in the corner of my eye. Raising my binoculars swiftly, my initial thoughts were confirmed: it was a green woodpecker, preening itself in a young, stark oak tree. From here I also saw a large grey heron, standing proudly by the water’s edge.

Having enjoyed the woodland, I went through a stile and climbed the bank to the riverside, a very open area where the breeze blew more keenly along the water. In the distance I could make out Crowland Abbey and then I caught sight of a mute swan sitting on a nest at the side of the river; a sign that spring was definitely on its way. This section, which travels north-east, is not completely open however. On the left were some quite tall trees which would provide shelter from northerly winds. Here I spotted a chaffinch and a dunnock, as well as a lone cormorant in its ungainly flight along the river.

The site is well signposted throughout and the notices, positioned periodically, are very useful. There is much to recommend it, not only for the birder, but for lovers of nature of all ages, so long as you bear in mind the lack of toilet facilities and the mud during wet periods.

I have visited Deeping Lakes Nature Reserve quite a few times and have always enjoyed it, albeit rather selfishly, as it never seems particularly busy. Perhaps, in these difficult times, this is a bonus in what is, after all, a nature reserve – and a rather good one at that.