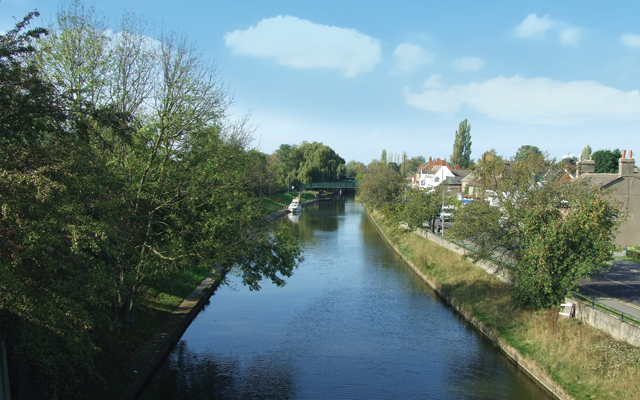 More than just a good place to see the cathedral.
Saxilby, called Saxebi in the Domesday Book of 1086, begins with a Viking identity, being the place of a man called ‘Saksulfr’, and was one of a cluster of settlements by the Roman-built Fossdyke canal. Arguably it has suffered, or gained, depending on one’s opinion, from being always linked to the now mythic and ghastly tale of Tom Otter’s murder of his new bride at the time the nation was absorbed by Trafalgar in 1805. Visitors to Doddington Hall will always be curious about the remains of Otter’s gibbet, of course, and they will want to see the Sun Inn, where the body was first taken.

But horrible history aside, Saxilby and its neighbour Ingleby have figured in many major historical events, including its part in the Civil War when the Earl of Manchester billeted his troops there in 1643, en route to Marston Moor, and the development of the Fossdyke as a crucial part of the national waterways, mainly from the middle years of the eighteenth century.

Many of the landmarks we see today are unchanged from the distant past. When David Kaye visited the village twenty-five years ago he noted that High Street and Bridge Street kept much of their Edwardian character; of course the former church of St Andrews and the church of St Botolph’s were pictured then, along with the Angler’s Hotel and the village hall. The images used then reflect the more everyday history too, such as the Methodist chapel and the Co-operative Society. Like all typical English villages, it was then a workable mix of ancient stone and more modern red brick.

Modernity was slow in arriving in Saxilby; this was due in part to the small population, reaching just over one thousand people in 1841 and decreasing slightly by 1901. Even over the next sixty years the figure only reached 1,636. A recent local history publication noted with an exclamation mark that every house in the village was on mains drainage in 1962. But that steady growth and innate conservative, community-centred history tells an important tale, reflecting the great moments of our national story, as when thirty-four young men from Saxilby lost their lives in the Great War and ten men in the next war with Germany.

Saxilby was really defined in the first years of the nineteenth century when the Act to drain and enclose the open fields was passed. The enclosure movement was just beginning to accelerate then and the area employed a fair number of ditchers and labourers, with a canal swing bridge being built in 1823. Lord Monson’s estates were sold at the time and a few decades later the railway came – by 1850 the Great Northern railway had extended its cross-Pennine line from Sheffield to Lincoln and six years later there were five or six departures a day to all areas of the line. By the end of the century, the station was part of the Great Northern and Great Eastern Joint Railway Co.

Eighty years ago, a visitor remarked on what is perhaps the defining image of the village: ‘The road runs alongside the canal for two miles…Consequently we get glimpses now and again of the round-nosed barges waiting with their picturesque unfurled sails…’ And of course other travellers have always noted the panorama: ‘…it has noble views of the grey towers of Lincoln soaring majestically into the eastern sky.’ But some of the features with a real Saxilby quality lie in its own topography, such as the church of St Botolph, of which Pevsner liked the ‘Georgian-Gothic doorway and lancet windows’ and also found that he asked more questions than he could answer when describing the story of the building. His overall response was one of being impressed, and we have to agree with that today.

These features which puzzled him are now clear: there has been a church on the site since around 1100 AD and, as a church should be, it has been a refuge in more ways than one; for instance in 1795 when the village was flooded the higher ground of the church was invaluable. The four different styles of the architecture puzzled Pevsner, but the finding of a Saxon or early Norman doorway in 1929 and the restored tower, along with pillars of various dates, added to the confusion in the survey for the Buildings of England series.

Two families and their story dominate the inner memorials: first the powerful Albini family, whose progenitor, William, fought with William the Conqueror at Hastings, and then the Daubney family whose crest adorns the altar frontal. In the late Middle Ages the Daubneys improved the church in various ways and their tomb chest was renovated after a public appeal in 1992.

The church bells are a prominent element in the church history too. There were two bells there in Tudor times; then in 1843 the parish clerk recorded the presence of four bells. One appears to have been cracked and not until the Edwardian years was this put right, and the bells pealed at Saxilby for the funeral of Edward VII and then the consequent coronation of George V. During the Second World War, a group of bellringers was formed and in the publication ‘Step Back in Time’, published in 2005 by the History of Saxilby and District Group, it was noted that as late as 1973 four members of that group were still busy ringing bells. In more recent times there is continuity, with the stalwarts of the present Band of Ringers and clearly this pursuit has always been popular: a photo of 1967 shows twenty-two members of the band.

There is no doubt that various hostelries have played an important part in the social history (and present social life) of the village. The Sun Inn was established as early as 1742, being remodelled in the nineteenth century, but time has not taken away its macabre associations with the slaying of Mary Kirkham and the famous mounting steps, on which the blood of the poor murdered girl is supposed to have dripped, was a tourist attraction for many years after the murder. Yet the Sun Inn, as numerous photographs illustrate, was the typical pub which acted as a hub of the community. Pictures show, for instance, a Sunday treat parade with farm wagons carrying women and children at feast week in 1906; the hotel figures again in a picture from Armistice Day in 1918, with locals dressed as Pierrots and in blackface as minstrels for the celebrations.

There is also the Ship Hotel, owned by the Wheatley family in the mid to late Victorian years, with the coal yard and barn behind – the location of the first fire station in the area. Listed in the 1840s is also the Oddfellows’ Arms, run by Thomas Clark. This was one of many pubs across the country, originally named the Independent Order of Oddfellows (Manchester Union), which was a social and benevolent organisation, which began in the early years of the nineteenth century.

Going down your way in Saxilby, into its past and present landscapes, reveals much of interest – far more than a place from which a distant prospect of Lincoln Cathedral may be found.