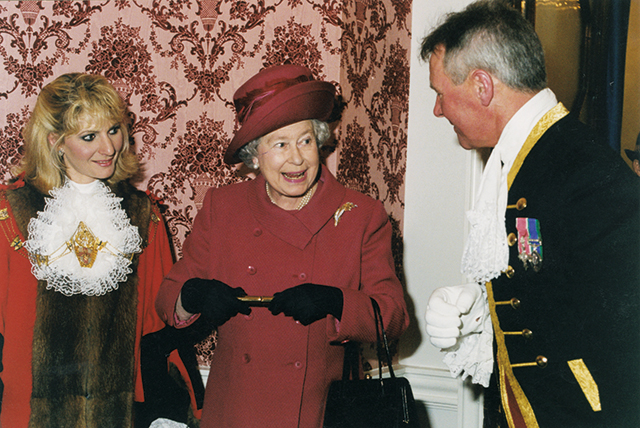 An officer and a generous gentleman

After more than three decades in post City of Lincoln Mayor’s Officer, Joe Cooke MBE will retire this month.
Joe has lived in Lincoln longer than any other place in his life now but his journey to the city and the community he feels so passionately about began in Jarrow, his birthplace.

He still retains the Geordie lilt despite a time spent in Scotland and serving in his teens and twenties with the Grenadier Guards and the Parachute Regiment in Ireland, Germany, the Gulf and Belize.

“I came to Lincoln because my mother had moved here in the late 1960s,” Joe explained. “I arrived here late one night with the offer of a job but nowhere to stay. A policeman pointed me to a boarding house on Monks Road and told me to mention his name. Doreen Wilding, the landlady was going to turn me away at first but she called me back because she said I had an honest face. The family were so kind to me and I have remained friends with them to this day.”

Joe’s first wife moved to Lincoln too and his three children were born in the city. He worked for nearly a decade at Smith Clayton Forge but in 1983 a friend told him of an advert in the Lincolnshire Echo to find a new City of Lincoln Mayor’s Officer. He thought Joe, with his love of history, military background and warm personality would be ideal for the job.

“I suppose one of my greatest strengths was that I could carry off the sword bearer’s uniform,” he joked. The medieval state sword was presented to the City of Lincoln in 1387 when Richard II and his Queen visited the city. Each subsequent reigning monarch touches the sword when they visit Lincoln. It is the greatest gem amongst a glittering collection of Civic Insignia which is held in the Insignia Room in the Guildhall, in the centre of Lincoln.

“It is the depth of history of the city and the ceremony attached to the Mayor’s office which appealed to me. I have learnt so much over the years, which I love to share with visitors to the Guildhall and I have supported each new Mayor on the protocol, etiquette and traditions of the office.”

The position of Mayor was established in 1206 and while a new Mayor is usually appointed every twelve months, Joe has seen thirty-six in office, as two passed away while serving. The Mayor’s Officer gives continuity to the role especially when annual events such as the Armistice Day parade or presentations of Freedom of the City showcase Lincoln in the media and to the local community. There have also been a similar number of High Sheriffs, four Lord Lieutenants and five Deans of Lincoln Cathedral while Joe has been in office.

The first Mayor Joe served was Robert G Bracey and his final one will be elected prior to 19th May, the date of Joe’s retirement day. Joe will almost match the thirty-four-year record of John Folley who died in 1898 and was Lincoln’s last official Town Crier and Keeper of the Keys.

Although the number of official engagements undertaken by the Mayor may have reduced over the last three decades, there are still the civic duties of chairing the City Council meetings, welcoming Royal visitors, including in Joe’s time the Queen on two occasions and Prince Charles, as well as dignitaries and groups from charities and twinning associations. There is also fundraising for the Mayor’s nominated charity each year.

Joe has not only been custodian of the Civic Insignia, he has added to the sparkle and prestige of the artefacts by making contributions to the collection through his own private fundraising activities. The most recent acquisition was the silver Sibthorpe Trophy which was contested annually at Lincoln Races. Other donations include commemorative trophies and the cleaning and restoration of a painting which hangs in the Guildhall. In 2006 the Cooke/Connell partnership contributed to the newest Cap of Maintenance which was made to celebrate 800 years of Mayorality.

One of Joe’s favourite stories is when he welcomed film star Omar Sharif to the Guildhall and as he began the tour he was suddenly aware that a large Alsatian dog was at the actor’s feet. The alarm had been triggered and Lincolnshire Police had quickly arrived with canine support.

“Fundraising is also very close to my own heart,” said Joe. “With my long-time friend Frank Connell, we have raised and distributed close to a million pounds over the past thirty years through Cooke Connell Fundraising.”

From small beginnings with funds raised by charity half marathons, the first big initiative was in 1998 when an appeal went out to raise £25,000 to bring Lincoln born nurse Gabriella Mazzali back to the UK after she had suffered life changing burns inflicted in Australia by her ex-boyfriend. Working with the Lincolnshire Echo to organise a High Street fundraising event, plus business and private donations, Gabriella was brought to Leicester to receive treatment.

A beneficiary in 2002 was a child, Arta Gjini, from Rubik in Albania, also a burns victim who needed surgery to free her foot which had fused with skin on her shin. Cooke Connell Fundraising donated money to the charity which brought Arta to Bristol for seven operations, which restored her mobility. Nine local children who had suffered loss or trauma were taken on an unforgettable trip to Lapland but many other small donations have been made to quickly support local families in crisis or fund much needed equipment.

“I believe in pouring back into the bucket of life what you take from it,” said Joe. “People in Lincoln are amongst the friendliest in the world and the kindness which has always been shown to me is what I try to give back.”

Fundraising is an activity which the whole family gets drawn into. With Joe as chairman and Joe’s wife Julie, as secretary, the largest single project which Cooke Connell have been involved in so far – the creation of the Lincoln Tank Memorial – was installed on the city’s Tritton Road roundabout in May 2015. Costing in total over £100,000, the final element to be installed this summer will be seating alongside the sculpture and information boards.

An annual St George’s Day Ball raises a significant amount of the money which Cooke Connell Fundraising distributes each year.

“We donate to a Christmas Lunch held in the city as well as the Nomad Trust. Lincoln City Radio, the community station, which plays some of my favourite music from the 60s and 70s, has received equipment and I am a proud Life Fellow and member of the Bishop Grosseteste University Council,” said Joe.

Joe and Frank have built a justifiable reputation as formidable fundraisers and amongst accolades and honours for his service to Lincoln, Joe is an Honorary Freeman of the City of Lincoln, a Rotary International Paul Harris Fellow as well as the recipient of an MBE for Services to Local Government.

Joe and Julie already have plans in place to travel more and go overseas to visit old friends. For certain they will return each time to a city which has benefitted many times over from the kindness once shown to a newcomer.