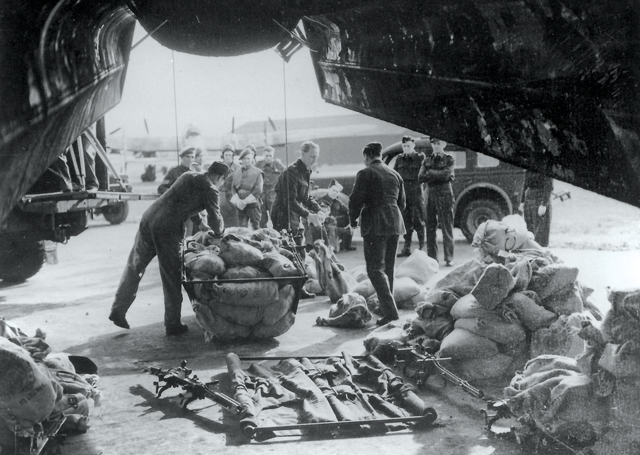 On a balmy day last September, 91-year-old Len Dorricott was at a very special bulb planting ceremony on the East Lawn of Lincoln Cathedral.
As he stood in the autumn sunshine, he watched pupils from Lincoln Minster School plant 40,000 Dutch bulbs under the guidance of floral designer, Jan Guldemond. When they flower in the spring this year, the riot of colour will tell a powerful story that was still fresh in Len’s mind that September day.

It’s the story of Operation Manna, which began in April 1945 when Lancaster bombers dropped food supplies instead of bombs into Nazi-occupied Holland.

Almost seventy years earlier, Len was just twenty years old, but already an experienced navigator with 576 Squadron of Bomber Command, based at RAF Fiskerton. He’d completed nine operations on his second tour when one morning he was called in for a crew briefing.

“We didn’t have any idea of how bad things were in that part of Holland,” Len explained, “they just told us the bomb bays were being packed with food and we had to drop it over Holland.”

Maurice Snowball, who was a twenty-three-year-old flight engineer with 550 Squadron at North Killingholme in April 1945, flew on the second day of Operation Manna. Now aged ninety-three, he tells a similar story.

“The crews knew they were bringing food into the hangars but we weren’t sure what was happening until we went to our briefing. We were excited because they told us to fly really low, no more than 500 feet. Usually it was between 17,000 and 20,000 feet but this time was different. It was vital to fly very low and stick to the agreed route. If we didn’t, the Germans would fire at us,” he said.

Although both Len and Maurice and their respective crews were used to being fired at during bombing raids, a truce had been agreed with the Germans to allow them to carry out the food drops.

“We were still nervous,” admitted Maurice, “because the truce hadn’t been signed when my crew went on those first drops. That didn’t happen until a couple of days later, so there was quite a bit of tension as we prepared to leave.”

As they finalised their preparations, they had no idea just how desperate the Dutch people were. Although some parts of Holland had been liberated, many were still occupied. Dutch railway workers had gone on strike to sabotage German troop movements and the Nazis had retaliated by cutting off food supplies, electricity, water and gas. In the midst of a very harsh winter, known as the Hunger Winter, western Holland saw starvation on an unimaginable scale.

Willem Ridder was only fourteen at the time and living in Rotterdam. He said: “It’s hard to explain if you’ve never experienced it, but people were walking around dazed by hunger, falling over in the gutter and mumbling to themselves. Thousands of people died on the streets every day. We never saw any cats or dogs; they had all been eaten. We lost our dog that way.”

As crews from Lincolnshire began their mission, some Dutch people were listening to the BBC on their hidden radios. Thea Tielrooy, who was eleven years old and living with her family just outside Amsterdam, was one of them.

“They said the RAF was coming the next day with food but we didn’t dare believe it. We’d been existing on sugar beets and stinging nettles,” she said.

Eighty kilometres away in Rotterdam, Willem Ridder’s brother, Henry, heard the same message. He remembers him jumping up and down, shouting, “Lancaster bombers are on their way to Rotterdam to bring food!”

By now, Maurice Snowball and his crew had already taken off and their fingers were firmly crossed. “We flew across the North Sea at just 300 feet,” remembers Maurice, “and as we reached the coast, we could clearly see the German anti-aircraft guns following us. We just had to hope that nobody would fire.”

Thea, who is now aged eighty-one, remembers frantically searching for the family’s Dutch flags, hidden so carefully when the Nazis arrived.

She said: “I was determined to wave them at the planes, to say thank you.”

In Rotterdam, Willem and his family – and what seemed like the city’s entire population – were on their balconies, anxiously looking up at the sky, straining their ears for the familiar sound of the Merlin engines.

“It started very faintly,” remembers Willem, “but gradually it became louder and louder until it felt like the plane must be on our roof.”

Suddenly, a Lancaster appeared out of nowhere and flew close to Willem’s apartment. “We waved at that plane with anything we could grab, to show how grateful we were.”

Everyone ran up the street, following the planes to the drop zone. “In the distance we saw the bomb bays opening and the food falling out. What a sight! As long as I live, I will never forget that moment.”

Neither will Thea, who couldn’t stop smiling as she told the story: ”They came in so low and with their bellies open ready for the drops. I could actually see the pilot’s face. We just cried and jumped up and down with delight.”

Maurice and his crew weren’t expecting the cheering crowds of people that were waiting for them. “As we got nearer, we could see them all on their roofs, waving flags, sheets, anything – it was quite a shock. We waved and smiled back at them – we hadn’t realised how much they were suffering.”

Len Dorricott was part of two later Operation Manna drops in May but the experience was no less emotional. “It began as just another mission but it turned into something very special. The fact that it was daylight and we were flying so low meant we literally had a bird’s-eye view. I saw a German soldier, walking in the street with his rifle over his shoulder, looking up at us. The best thing of all was seeing the people on rooftops waving at us with anything they could. It was a marvellous feeling, the best thing I did in the war. I will always feel proud of that.”

The Dutch bulbs planted outside Lincoln Cathedral last September will flower in time for a ceremony on 21st April to celebrate the 70th anniversary of Operation Manna. Sadly Len Dorricott won’t be there to see them. He died just before Christmas but his heroism, and that of Maurice Snowball and so many other Bomber Command aircrews from Lincolnshire, will live on. They will never be forgotten by the people of western Holland.