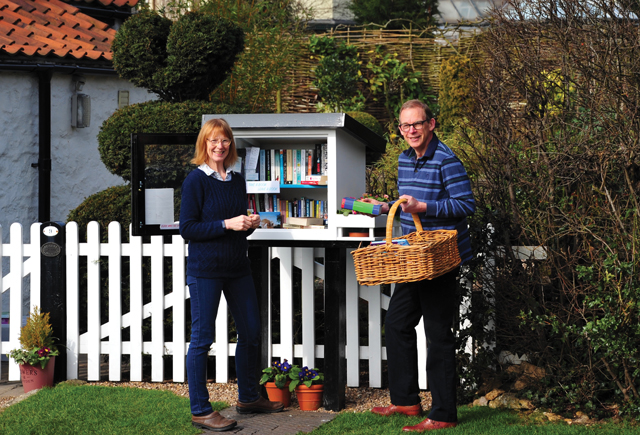 A Lincolnshire couple, who share a love of reading, have found books also build friendships within their village.
Ian and Anita Cross, live in Appleby, North Lincolnshire, in a cottage long time readers of Lincolnshire Life will recognise. The Thatched Cottage on Paul Lane has appeared as a cover image several times during the fifty-plus-year history of the magazine. Recently they have added a purpose-built cabinet to their verge which houses the first Little Free Library in Lincolnshire.

“We are both bibliophiles,” explained Anita, “and one of the hardest tasks we had to tackle when we married in 2002 was combining our libraries, which had so many duplicate titles.

“We came across the Little Free Library idea, which began in America about six years ago, and thought that its simple philosophy of ‘Take a Book: Return a Book’ would be a great way of circulating some of our collection.”

Ian took up the story: “Part of our garage is the depository for the library but the cabinet is the public access point, always open with a selection of diverse genres and authors. We see our role as curators of the books which pass through. The cabinets you see on the Little Free Library website reflect local architecture and locations so we asked local joiner Darren Smith of Buttonswood to help us make a bespoke cabinet which would complement the location and the cottage. Winterton and District Lions Club were kind enough to fund the build for us.”

Ian and Anita did consider thatching the roof of the cabinet but in the end they kept to the black and white colour scheme, side balconies to hold pots of flowers and glass on three sides to help visibility of the fifty or so books it can accommodate.

“We initially contacted publishers and local supermarkets to see if they would donate any books. Some publishers agreed straight away while Tesco and Waitrose gave vouchers for us to spend in the book section of their stores. By far the largest contribution of books has been made by local people though. We had an official opening at the end of February and the take up and support we have received has been wonderful.”

Anita went on the say: “Appleby used to have a reading room, a small building between the cottage and the Old Methodist Church. I have often thought how magical it would be to try to reinstate a location where people can come together to read and talk about books. That is perhaps for the future but what the Little Free Library has done is stimulate interest in reading and we have met and made friends with fellow village residents we had never seen, let alone spoken to before.”

The couple do have plenty of ideas to further promote literacy in Appleby, some explained with a great sense of fun. “We intend to introduce a mobile version of the library; we have an old tea trolley in the garage which will be ideal for wheeling a selection of books to the housebound residents of the bungalows. There is also scope for themed weeks and events.”

Appleby Little Free Library is number 35501 affiliated to the organisation but already since the beginning of the year, worldwide, that number has risen to more than 36,000. It cannot be too long before this inexpensive and self-sustaining idea is adopted elsewhere in the county.

If you would like more information about Appleby Little Free Library visit their Facebook page or www.appleby-lincs.co.uk