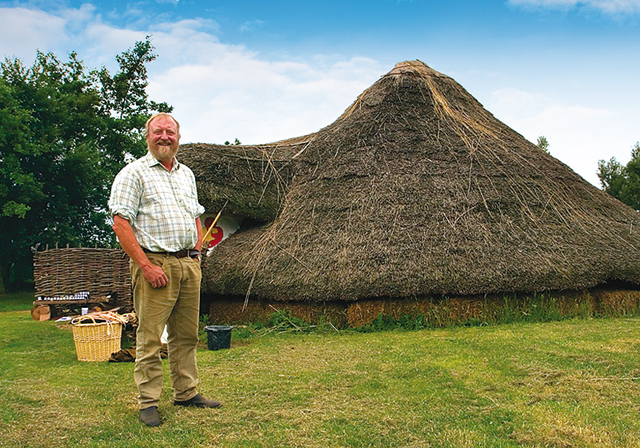 Archaeologist with a passion for the ordinary

Promoting two new books, writing another, fitting in interviews, television and radio appearances as well as looking after his farm is all in a day’s retirement for archaeologist Francis Pryor.
A familiar face to many, as one of the experts on Channel 4’s Time Team, he is also the archaeologist who discovered Flag Fen, near Peterborough – one of the most important Bronze Age sites in Europe.

The history of the ordinary man fascinates Francis and he has made it his life’s work to bring archaeology – a subject sometimes considered stuffy and elitist – to the masses. He hopes to do this further with the launch of his two recent books: ‘The Birth of Modern Britain’, which is the fourth and final installment in his Britain series and ‘The Making of the British Landscape’, which explores how the land around us has changed from prehistory to today, including the drainage of the Fens.

Francis said: “My first love is Britain BC, but what I have really come to like is the Industrial era. I enjoy it because it is so different from prehistory, as it’s a period of such dramatic change. I like the fact you know the names of some of the people.

“At the same time I’ve always had an interest in the landscape. My approach to archaeology in general has been on quite a broad scale; I never really like digging sites in isolation – I want to know how they are working settlements.

“I like to know where people did their shopping, where they took their things to the market. You can’t just look at a village, you have to see how it fits into the economy; what people are doing, when they’re doing it and where did they go after that. That’s the thing that distinguishes archaeology from history. History tends to be top down – the great and the good, Prime Ministers, Kings, Queens, soldiers. What I’m interested in is the ordinary working, middle class – the people actively changing the world around them. When the civil wars were being fought in the 1600s life still went on.”

Francis describes himself as a “country boy”, having grown up on the Hertfordshire/Cambridgeshire border around Baldock. His passion for archaeology was ignited on a dig during his gap year and following this he went on to read the subject at Cambridge University.

On completing his studies Francis came to the conclusion that there could be no career in archaeology, so he took a job in a London brewery; after eighteen months he decided an indoor job was not for him.

He adds: “I couldn’t stick being in an office; I had to get outdoors. I emigrated to Canada and got a job in a museum in Toronto. I still used to go on digs at the weekends and in my spare time; it’s like anything: I didn’t realise just how much I loved archaeology until I’d stopped doing it.”

Throughout the 1970s Francis was commissioned to carry out several digs, including one in Peterborough, and following the field work all the findings had to be written up. But it was on a November day in 1982 that he made what was to be one of the key discoveries of his career: while out walking along the dykes near Fengate, Francis came across a piece of oak lying in the mud, which following excavations revealed it to be part of a timber platform the size of Wembley Stadium. This late Bronze Age structure was over 3,500 years old and had been used by the Celtic Fen people as a place of worship and ritual.

“I had an inkling Flag Fen was there,” Francis, who lives in Sutton St James with wife Maisie, explained. “It was just a matter of finding it. It’s one of the best preserved and most important Bronze Age sites in Europe. It’s extraordinary.”

Flag Fen was the subject of Francis’s first popular book for English Heritage in 1992. It was extremely well received and proof that he could write a page-turner as well as various academic reports. It was followed by a second book on farming and prehistory, volumes on how to set up an archaeological dig and how one works, and ‘Seahenge’ about a Bronze Age timber circle dating from around 2000 BC discovered on a remote beach near Hunstanton, in Norfolk.

It was as a result of this that he was commissioned to write ‘Britain BC’ – a popular account of Britain before the Romans, which was followed by ‘Britain AD’, ‘Britain in the Middle Ages’ and the final chapter in the series, ‘The Birth of Modern Britain’, looking at the period from 1550 to the present day.

Francis has also been a regular on the small screen since the 1970s, presenting several television documentaries, including one on Flag Fen for BBC2 in 1989; he also fronted the children’s program Now Then, which introduced youngsters to characters from the past and got them interacting. But it was a chance meeting with Time Team creator Mick Aston in the mid-1990s that led him to become involved with that show. He accepted an invitation to appear and since then he’s been a regular part of the team, taking part in two or three episodes each season.

When asked what’s next, Francis admits he won’t be carrying out any more field digs – saying the funding for such work should be awarded to younger archaeologists; he also admits it would be nigh on impossible to find another site as significant as Flag Fen.

And as for writing, he has already started his next book, which has the working title of ‘10,000 Years of Family Life in Britain’, but hints it could be his last, adding: “I think you should stop writing books when you run out of things to say. I’ve written about farming, people earning a living and working, which were all covered in the Britain books, but I’ve never written about ordinary family life – and family life is what makes us human.”

I for one hope it’s not his final offering. I had a fascinating afternoon chatting to Francis, during which time we covered a wide range of subjects, and I can’t help but feel that as long as he keeps writing about his lifelong passion there will always be an eager audience keen to read what he has to say.