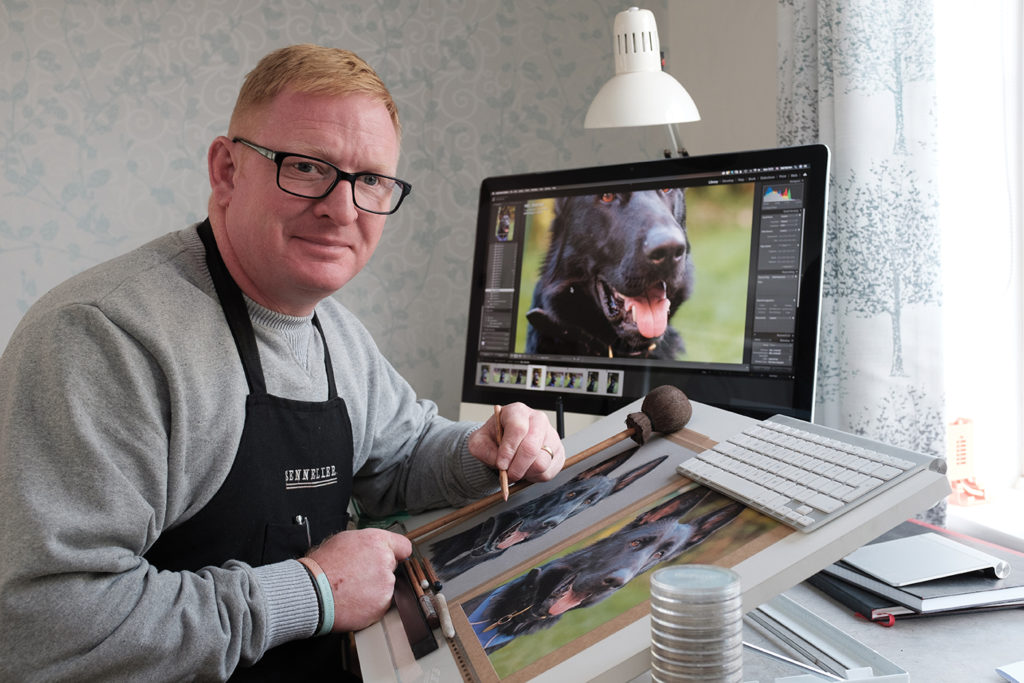 To find out more about Neil’s work or to commission him visit his website www.neilwilliam.art or his Facebook page @neilwilliamartist

Neil Burton has always been passionate about wildlife and art but as Kate Chapman finds out, it is only more recently that his two great loves have come together – with stunning results.
Former Grenadier Guardsman and police officer Neil loved drawing as a child, but his interest in art fell by the wayside when his career took a different turn – until a couple of years ago when he challenged himself to pick up a pencil and start doodling again.

After showing the picture he’d drawn of his beloved dog Benny to wife Cathy, and then to family and friends via social media, he was blown away by their complimentary comments. As well as some lovely feedback he also received a request for his first commission and since then hasn’t looked back – going on to launch his own business drawing pets and other wildlife from his home in Long Sutton.

“It was early 2018 when I sat doodling a wren on the back of an envelope while I was on the telephone, it was a crude little sketch but I sat and thought how much I’d enjoyed it and that I should do more,” recalls Neil.

“So, I decided to set myself a challenge – to draw a dog and to use colour. I sat looking at our terrier Benny and just thought I’m going to draw you – it was a feeling a bit like an itch that wouldn’t go away.

“I remember thinking to myself, if I can say hand on heart that it looked like Benny I would show it to someone, even though I’d always been scared of sharing my work.

“Cathy was really surprised I’d been hiding this talent as the only pictures she had seen were some drawings of birds I’d done when I was younger. I shared the picture on Facebook – I can remember physically wincing as I pressed send – but people were really supportive and then I was asked if I would draw someone else’s dog and it has sort of gone from there, as I’ve completed one commission and shared it, another has come along.”

Neil says his artistic gift runs in his family as his father and grandfather before him were also keen artists, while his own children are very creative too.

“As a child I did quite a lot of art, but it was always on my own terms – I’d only do it if I wanted to do it,” he explains. “I think it’s something that I inherited as my dad is an artist, his work is watercolour and acrylic landscapes around the UK and particularly North Norfolk, while my grandfather painted as a hobby too, working mainly in oils.

“My dad started painting during the mid-1980s, so I would always be there looking over his shoulder, completely surrounded by art. I was mainly drawing animals in graphite as I was terrified of colour, I always thought that by adding it I would ruin my pieces.”

When he left school aged 16, Neil decided against a career as a technical illustrator, drawing vehicles to scale and instead joined the army as a Grenadier Guardsman, a role which took him to Northern Ireland at the height of the Troubles. At the turn of the millennium he left the Armed Forces and became an officer with Norfolk Police. He briefly dabbled in art again, creating some cartoon murals for his two children, but other than that says he barely picked up his pencils.

After 15 years with the police Neil decided it was time to explore more flexible self-employed roles and currently works as a window cleaner, which fits in well alongside his growing art business.

“After seeing the first picture of Benny I drew, my wife said, ‘I don’t know how you do it’ and to be honest, neither do I, it just sort of comes naturally,” he explains.

“I’m completely self-taught, although I have looked at different techniques and mediums online as I’ve been experimenting a bit. I’ve gone from graphite, to coloured pencils, to pastels, which I’m finding is a lovely medium to work in.

“It’s really versatile, you can blend them and the colours are amazing, although it is moveable, unlike paint which is permanent. You have to be careful not to push your hand on it as you can completely destroy it. It’s okay once you get used to it.”

Unfortunately, the coronavirus pandemic put paid to Neil’s plans to show some of his work in local exhibitions throughout 2020, although he did put some pieces in a gallery in Old Hunstanton, in Norfolk.

He has set up a website and a Facebook page to showcase his work and continues to work on a number of commissions.

“I’ve taken over the lounge in my house, that’s where I’m working at the moment, although I’d eventually love to have my own studio,” he says. “When I first started out it was taking me about 20 hours to complete a piece, but as I’ve gone along, that’s down to around nine or ten hours for each one now.

“As for inspiration, I take that from all sorts of things whenever I’m out and about – there are always a lot of birds around here and whenever I go out on my bike I usually see something, whether it’s a flower or an insect.

“For a lot of my pieces though I use photos and I always work from the correct size, using dividers to make sure my drawings are exactly proportionate.

“I would love to make drawing my full-time job, but I know I’ve got to be realistic – I’ve got bills to pay and a family to support. At the moment it’s all about getting my name and my work out there.

“I absolutely love drawing though, especially animals, wildlife and dogs. I love the creative element, getting quite lost in it – it’s all quite relaxing.”