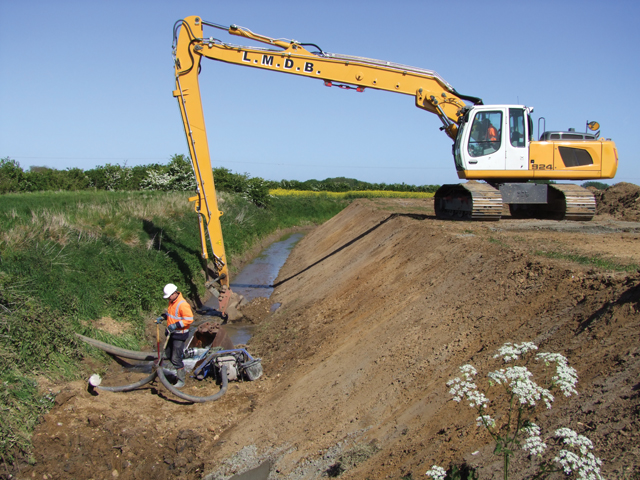 The Lindsey Marsh Drainage Board is on a course to keep our feet dry.
It seems almost unbelievable that the work undertaken by most Internal Drainage Boards (IDBs) generally goes by quite unnoticed by the public. Nevertheless, as insignificant as their role in society might be perceived to be, these remarkable authorities rapidly rise to pole position with the media whenever the threat of flooding and prolonged wet conditions prevail. The primary role of all IDBs is the management and monitoring of water levels and the prevention of flooding in their respective areas. The Lindsey Marsh Drainage Board (LMDB) is certainly no exception to this ideology and, quite simply put, this is the largest IDB in the country.

The present Board came about in November 2000 from the amalgamation of the Alford Drainage Board, Skegness District Drainage Board and Louth Drainage Board. With an area covering roughly the eastern half of the county from the Humber to the Wash, the LMDB has the responsibility for the ongoing maintenance of 1,000 kilometres of watercourses and culverts. It also undertakes the construction of new ones wherever needed. There is no doubt it is a vast undertaking and, with the responsibility of constantly monitoring water levels throughout such a huge area, it is certainly no mean feat of water management.

The chief executive officer of the Board is Andrew McGill and he explained to me how East Lincolnshire ranks high in the list of geographical areas with special drainage needs in the UK. This also takes on special significance with regard to its being one of the country’s most important agricultural regions too. Apart from contingency plans in the event of threatened flooding, the Board has the responsibility of adapting its role accordingly when drought conditions arise. This necessitates the ability to both raise and lower water levels and to do this, in addition to numerous locks, sluices, weirs and embankments, there are thirty pumping stations situated throughout the LMDB area. Interestingly, the Board has two old, and fully preserved operational pumping stations which are open free to the public on certain days. These are Anderby Creek Drainage Museum – open 21st July and 18th August 2013, and Gayton le Marsh open 16th June, 21st July, 25th August, 14th and 15th September 2013.

We live in a country that is very unpredictable as far as climate is concerned and we have experienced some extremes in recent years both by way of prolonged droughts and of continuous heavy rainfall. This in itself makes decision making and the associated actions more difficult. I learned from Andrew how the Board has done an excellent job in keeping the area flood free so far, but the year 2007 saw some devastating floods in other regions and this did result in some policy changes within the LMDB. It should be reassuring to learn that, of late, the Board has invested a massive amount of money in the protection afforded to many urban areas including Skegness, Ingoldmells, Mablethorpe, Trusthorpe, Sutton on Sea, Sandilands, Wainfleet and Burgh le Marsh.

In March 2012, following nearly two years of below average rainfall, and as a response to low ground water levels which were deemed to be ‘serious’, the Government declared a ‘drought’ for large tracts of Eastern England including the area of Lindsey Marshes. The LMDB responded by taking action to ensure an early return to summer operational water levels. This sufficed to conserve water within the soil and in turn proved helpful to the agricultural industry and other industries as well as the natural environment. It is quite ironic that immediately after the drought concerns, April came in with the heaviest rainfall recorded in tweleve years!

Collectively, IDBs are amongst the biggest managers of freshwater and wetlands in the country and as such, they are uniquely equipped to make huge contributions to various habitats. Indeed, all IDBs are signatories to local Biodiversity Action Plans (BAPs). The promotion of ecological wellbeing does have the advantage of helping to reduce the impact of climate change as it happens.

The maintenance of drains and watercourses is done on a rotating basis and deposits of silt are removed on a ten to fifteen year cycle. Drain and dyke banks are important features and they are designed to have a specific angle with an area of the bank set back from about halfway up. This is to accommodate ordinary water levels and, when necessary, floodwater on the higher reaches. Bank clearances, dredging and removal of weed growth is all carried out sympathetically to wildlife and work is suspended at bird nesting times. All work on banks is only carried out on one side at a time in order to leave wildlife undisturbed on the other.

The Environmental Officer for the LMDB is Chris Manning and one of his responsibilities is for the implementation of the Board’s BAP. This was launched in 2010 and in order to assess the success of the venture, one barometer has been the water vole. This is a species that has suffered large declines nationally over recent years and we have even witnessed its total demise in many areas. It seems that what the LMDB is doing is working very well, for the Board’s area is now considered a registered key site for water voles, with increases of fifty-eight per cent having been recorded since the plan was implemented.

Over the past few years, reed beds have been created where possible, either on or next to watercourses. This has made for the provision of ideal habitat for reed warblers, wading birds, water voles and great crested newts. A proposal a while ago to introduce owl boxes at pumping stations has also been a great success. There is one installed at most of these outposts and this has certainly contributed to Lincolnshire now having the most prolific barn owl population in the country. Working in partnership with other conservation bodies, the LMDB has been instrumental in achieving high environmental standards – even to having been made recipients of the prestigious Lincolnshire Environmental Award in 2009 for ‘Operation Barn Owl’.

The LMDB does have some sites of very special significance within its borders and these were pointed out to me by Chris. The Lincolnshire coast is a designated European Marine Site with various management schemes in force between the Humber and The Wash. The entire county coastline is classed as a National Nature Reserve. Some other sites are classed as SSSIs (Sites of Special Scientific Interest) as classified by the Department of the Environment. Of considerable interest to the DoE, RSPB and other scientific bodies are sites at Gibraltar Point, Bratoft Meadows and Sea Bank Clay Pits amongst others. We have within the LMDB’s area particularly good breeding grounds for bittern, marsh harrier, bearded tits and many other species too numerous to mention. We have sites where the green winged orchid is thriving along with many other plants of huge environmental importance, with some considered to be on the endangered list.

The LMDB is involved with several ongoing projects, one of these being the Lincolnshire coastal grazing marsh project – a scheme designed to create wetlands for the benefit of wildlife. The project covers the areas around Saltfleetby, Burgh le Marsh and Anderby. It has attracted some funding from the Heritage Lottery Fund for the next three years and the site has already been successful in the breeding of avocets, redshank and lapwings. The development of Winthorpe flood storage area, when completed, will provide for a special area of wet grassland to encourage the breeding of wading birds. It has been widely noted that the introduction of new breeding sites and habitats for birds and mammals does much to offset the decline of species numbers through encroachment.

The LMDB is definitely doing all it possibly can to promote wildlife and conservation – and on a large scale too. The Board manages a very large workload with what can only be termed a quite modest establishment. It is a forward-looking organisation and it is continually involved in future planning and development. In recent times it has had to face up to times of austerity like all of us but the Board has still been able to keep its income from drainage rates at last year’s levels, despite making heavy investment in its infrastructure. Given this, and the fact that it has the stewardship of much of the county’s flora and fauna, it is very gratifying to know that this can be factored in so well with the business of keeping our feet dry.

The latest developments and proposals of the LMDB are open to public view and questions can be answered by staff at their stand at this year’s Lincolnshire Show.