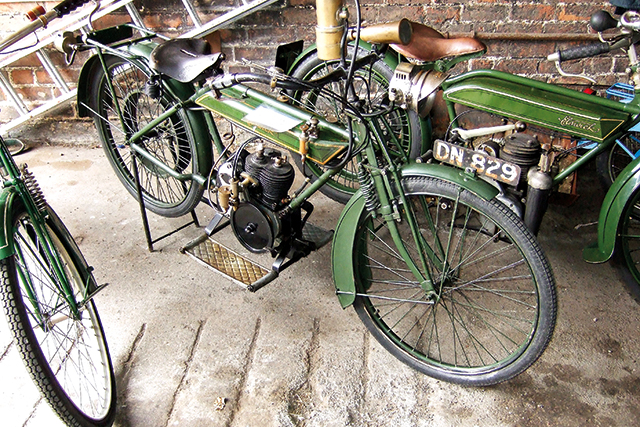 Eric Bryan traces the legacy of Frederick Hopper, who saw his small blacksmith’s-shop repair facility grow to become a worldwide exporter of its own manufactured bicycles, and a major industrial force in Lincolnshire.
Frederick Hopper, born in Barton-upon-Humber in 1859, was a Lincolnshire engineer who trained at agricultural engineering firm Marshall, Sons & Company of Gainsborough. He established F Hopper, Machinist and Whitesmith, in what was formerly a blacksmith’s shop in Barton in 1880. Hopper repaired machinery for local businesses, and soon his work extended to mending bicycles. A growing interest in the two-wheelers led him to begin stocking Humber and Singer bicycles for sale. Before 1890 Hopper’s business developed into a bicycle manufacturing firm, with a model called the Ajax.

As early as 1898, Hopper became interested in expanding into motorbike and car sales. In 1902 Hopper noted the German NSU motorcycles being marketed in England. Inspired by the NSU machines, in early 1903 Hopper introduced his Torpedo motorcycle with a 2-horsepower NSU engine. ‘Torpedo’ was the brand name Hopper used on his top line bicycles, though this was basically an NSU motorbike wearing a Torpedo badge. By now the firm was not only manufacturing complete bicycles and frame sets, but had expanded into the production of a variety of goods ranging from firearms to sewing machines.

Called F Hopper & Co Ltd from December 1898, as of 1906 the firm employed 400 workers. In this year Hopper had 4-hp and 5½-hp NSU motorcycles available, both two-cylinder models. Hopper marketed these as NSU machines. In 1907 the firm offered more NSU motorbikes, but in 1908 the NSU machines were again wearing Torpedo badges. From 1907-12 Hopper also marketed kit cars supplied by Star Engineering Co and complete cars made by Brown Brothers.

In 1910 Hopper produced his own motorcycle frame and presented the first true Barton Torpedo touring motorcycle. The vehicle had a Fafnir 4¼-hp engine, and was priced at £35. Hopper soon introduced 2- and 3¾-hp models with Precision motors. Two more Torpedo motorcycles appeared in 1911, and two Elswick-branded motorbikes also debuted. Hopper wanted it to appear that the Torpedoes and Elswicks were made by different companies, and in 1912 issued separate catalogues for the two ranges. The Elswick motorbikes were finished in the green paint scheme which the Elswick bicycles were known for.

For DIY types and home mechanics, Hopper was also offering the Torpedo touring and Torpedo-Precision lightweight engines for sale separately from the motorcycles.

The firm’s growth continued, and by 1912 Hopper & Co was a major manufacturing company exporting bicycles to points across the British Empire. Australia, India, Japan and South Africa had especially hungry markets for bicycles. Hopper would also export its machines to North and South America, with Brazil becoming a major market. The proximity of the Port of Hull to Barton made for efficient shipping logistics, though ports at Liverpool and London were also used for international export. Reported motorcycle production numbers for this period vary from approximately 600-700 or more per year. The company’s workforce by this time had swelled to 800 employees.

Hopper & Co, in cooperation with a number of investors, purchased the Elswick Cycle Company, of Elswick, Newcastle-upon-Tyne. Initially operated as two separate firms, Hopper bought out the other shareholders in 1913 and shut down the Elswick production site. He soon merged the two firms into the Elswick Hopper Cycle and Motor Company, based at Barton. The business continued to grow from this stage, with the firm not only producing bicycles but also many of the required components. Hopper further manufactured machinegun mounts for BSA and motorbike forks for Ariel Motors Ltd. Sales were strong to the point where periodically more production space was needed, whereupon Hopper would construct or acquire more buildings to provide it.

In 1913 the Barton and District Motor Club staged a hill climb competition at West Halton. Amongst the nineteen vehicles which placed, six were Elswicks and four were Torpedoes. This was excellent publicity for Hopper, especially as the competition included Triumph, BSA, and other famous and respected makes of motorbikes. The Elswick Hopper rider in the competition was Freddie Hopper, Frederick’s son.

Elswick Hopper’s catalogue for 1915-16 advertised six Torpedo motorbikes, but during World War One the company’s motorcycle department was mostly dedicated to the war effort. In these years Elswick Hopper lost many employees who died in action while serving in the Army or Navy. Though an Elswick and a Torpedo were shown at the 1919 Olympia Exhibition, after the war Elswick Hopper was playing catch-up to supply the motorbikes advertised in the catalogues.

Elswick Hopper was at one time second only to Raleigh in bicycle production figures. After Hoppper died in 1925, aged 66, his son Freddie became managing director, and the Elswick Hopper Company was listed on the London Stock Exchange. The firm generally thrived in the interwar years, though there were some tough periods during the Depression in the 1930s. During World War Two, Elswick Hopper was engaged on government contracts, and though nearby Hull was heavily bombarded, the company suffered no damage from German bombing. By 1949 the firm’s main works at Marsh Lane occupied thirteen acres and employed about 400 workers. Export at this time included bicycles with chromium-plated frames, especially for the Cyprus market.

Elswick Hopper experimented with mopeds in the 1950s, constructing and testing various prototypes. One result of these projects was the Lynx, which premiered in 1960. The vehicle had a French VAP 49cc engine and went to perhaps 42mph. Though the Lynx trials were successful, it was found to be more economically viable to import and sell Italian Capri scooters and French Auto-VAP mopeds through a subsidy called Scootamatic. In 1961 Elswick Hopper was listed as a producer of tricycles and mopeds as well as bicycles, employing 500 workers.

Another period of company growth began in 1974 when Elswick Hopper acquired Wearwell Cycles, founded before 1872, and in 1978 purchased Falcon Cycles. Elswick Hopper at first ran Falcon as a subsidiary, but then merged it with the business at Barton.

In the early 1980s Elswick Hopper plc had become a conglomerate which was diversified into engineering, manufacturing and distribution. By this time, however, the firm was losing money. A reorganisation in 1984-86 resulted in the new company name Elswick plc, with its bicycle division called Falcon Cycles. The firm ceased production of Elswick brand bicycles, and transferred all manufacturing to a new Brigg factory. In 1987 Elswick plc purchased the distribution and manufacturing divisions of competitor Holdsworth, an acquisition which included the well-known Holdsworth and Claud Butler brands.

Despite this reinvigoration of the business, in the late 1980s the UK bicycle market became swamped with imports of cycles and components from the Far East. Due to this turn of events, the Brigg factory focused on assembly of imported bikes and components, rather than on manufacture. Production at this time was less than 120,000 bicycles per year. Elswick then expanded into printing and packaging, and in December 1991 sold its bicycle division to Casket Ltd, which oversaw Townsend Cycles Ltd. The Barton location sold in September 1994, and Ferguson International purchased Elswick plc, but went bankrupt and was liquidated in January 2000.

Casket Ltd was able to expand the Falcon brand, but began struggling after its purchase of a German bicycle firm. Tandem Group plc acquired the ailing Casket in November 1995, making it a division of Falcon. Falcon, based in Brigg, produces bicycles under several brand names, including Elswick, and sells more than 300,000 bicycles annually.

Due to their ruggedness and durability, you can find old Elswick Hopper bicycles still in regular use in some African and Asian countries. Those interested in more details on the history of Elswick Hopper might like to consult Elswick-Hopper of Barton-on-Humber – The Story of a Great British Cycle Maker, by Nigel Land.

EXCERPTS FROM ADVERTS THROUGH THE YEARS

1904: A Regular Startler! World-wide reputation, at knockout prices. Please remember we are not either job or shoddy makers. The machines are manufactured throughout on our own premises [ . . . ] and we have a thoroughly equipped factory fitted up with the latest labour-saving appliances. A 24-hour guarantee.

1914: We can give immediate delivery of frames, cycles, motor cycles, component parts and accessories. Our new catalogue is now ready. It will be to your advantage to send for a copy. We guarantee sterling value, reasonable prices, immediate delivery.

1936: 56 years of progress and specialisation in the production and design of bicycles. Roadsters and Light Roadsters, Sports Tourists, Lightweights and Semi Racers, Racers, Tandems, Juniors and Junior Tricycles. Prices ranging from £2 19s 6d to £15 3s 0d.

1955: Craftsmen make them. Finest of all. Superb in design. Superb in performance. Perfected by 75 years’ manufacturing experience. Discerning cyclists ride them. Illustrated brochure will be sent free on request.