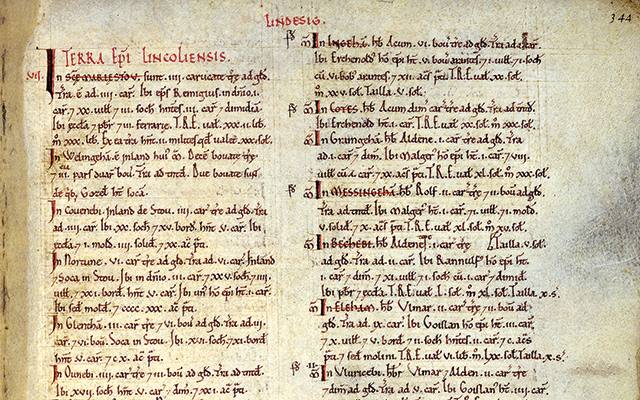 Lincolnshire’s Great Exhibition, held to mark the 800th Anniversary of Magna Carta in 2015, was such a success, and attended by so many, that I was determined that it should not be looked back on as an isolated event.
Even during Magna Carta year I was increasingly reflecting on the great, but much less widely known, anniversary of 2017: the 800th Anniversary of the Battle of Lincoln, the least known decisive battle in English history – even, sad to say, in Lincoln.

When I discussed my plans with the Historic Lincoln Trust the response of colleagues was as encouraging and enthusiastic as it was from our splendid honorary curators of the Great Exhibition – Jeff James, chief executive and keeper of the National Archives, and Dr Alan Borg, formerly director of the Victoria & Albert Museum. And to them, this year, we have been able to add a third special helper and adviser, Dr Thomas Asbridge, author of The Greatest Knight, the fine biography of William Marshal, which was published in 2015.

The theme of this year’s exhibition is Battles and Dynasties. That was because the great Battle of Lincoln secured the Plantagenet Dynasty by confirming Henry III, the nine-year-old son of the unlamented King John, on the throne. We decided to take a broad historical look at how certain great battles had changed, or confirmed, the royal houses of England from the Norman Conquest onwards.

Lincoln was effectively refounded as a great city by William the Conqueror. It was he who moved the seat of the Bishop of the vast diocese, which included Lincoln, from Dorchester on Thames to Lincoln itself. Our cathedral’s first bishop, Remegius, had come over with the Conqueror in 1066. It was William too who, in 1068, realising the strategic importance of the city, established our Castle. And it was William who commissioned the most extensive survey of land and land ownership ever conducted in Europe. Issued in 1086, it soon became known as Domesday Book.

Our exhibition begins with that, the most important document in English history. When I first suggested the idea of our having the opportunity to display Domesday Book in Lincoln, it was more in hope than expectation. But thanks to the imaginative and enthusiastic help of Jeff James and his colleagues at the National Archives, to the Government for granting indemnity and to the Secretary of State for agreeing to the loan, we will display Domesday in the David P J Ross Magna Carta Vault for the duration of the exhibition, from 27th May until 3rd September. This is an historic first, for Domesday has never been shown in provincial England. It will rest beside Lincoln’s 1215 Magna Carta and our Charter of the Forest, issued 800 years ago this October. The Cathedral’s copy is one of only two to survive. But the appearance of the Domesday Book in Lincoln, a truly memorable landmark in our city’s and county’s history, should not detract from the interest and splendour of the other exhibits.

Visitors to The Collection, where the rest of the exhibition will be displayed, will be able to see the near contemporary illustrations of the Battle of Lincoln from the thirteenth-century Matthew Paris Chronicle. There will also be an illustration of the earlier battle of Lincoln, that of 1141, when King Stephen was captured at the Castle. There will be the prayer book which Richard III took to Bosworth Field and the personal book of devotions of Mary Tudor as well. On a more sombre note, visitors will be able to see the Bill of Attainder which led to the execution of Katherine Howard and the death warrant of Mary Queen of Scots. We shall be displaying the great illuminated bible of Henry IV, Henry Bolingbroke, the only king to be born in Lincolnshire, and the will of Henry V. We shall also have the contemporary parliamentary account of the trial of Charles I in Westminster Hall and the Act of Settlement, which brought to a close the constitutional upheavals of the seventeenth century and laid the foundations for the Hanoverian succession. And, from much more recent times, there will be the Instrument of Abdication of Edward VIII.

The exhibition will also include some remarkable royal portraits and miniatures including, from the Royal Collection, Van Dyck’s great triple portrait of Charles I and Hans Holbein’s drawings of Anne Boleyn and Bishop Fisher of Rochester. All three of our longest reigning Queens will be commemorated, with portraits of Queen Elizabeth I, Queen Victoria and our present Queen.

Our exhibits come from the Royal Collection, the National Archives, the British Library, the Lambeth Palace Library, the British Museum, the National Portrait Gallery and many other public and private collections in this country. We have been fortunate enough to secure from the Pierpoint Morgan Library in the United States the manuscript life of the great William Marshal, one of the two heroes of the Battle of Lincoln, written less than a decade after his death in 1219. We will also have his seal and that of the other hero of the battle of Lincoln, Nicola de la Haye, Constable of the Castle.

All in all this will be a sumptuous and memorable feast of exhibits – manuscripts, documents, portraits and even Queen Victoria’s throne. They have never been seen together before – and will never be brought together again.

The Trust is enormously grateful to all those who have lent and to those who have made the exhibition possible by generously sponsoring it. Our two principal sponsors are the David Ross Foundation and Investors in Lincoln but a number of Lincolnshire based companies and individuals have also given generous donations and without this financial support we could not have gone ahead.

I do hope the readers of Lincolnshire Life will take the opportunity to visit the David Ross Magna Carta Vault and The Collection this summer. The exhibition runs from 27th May until 3rd September. There will be a modest charge but purchasing a ticket will allow you a return visit.