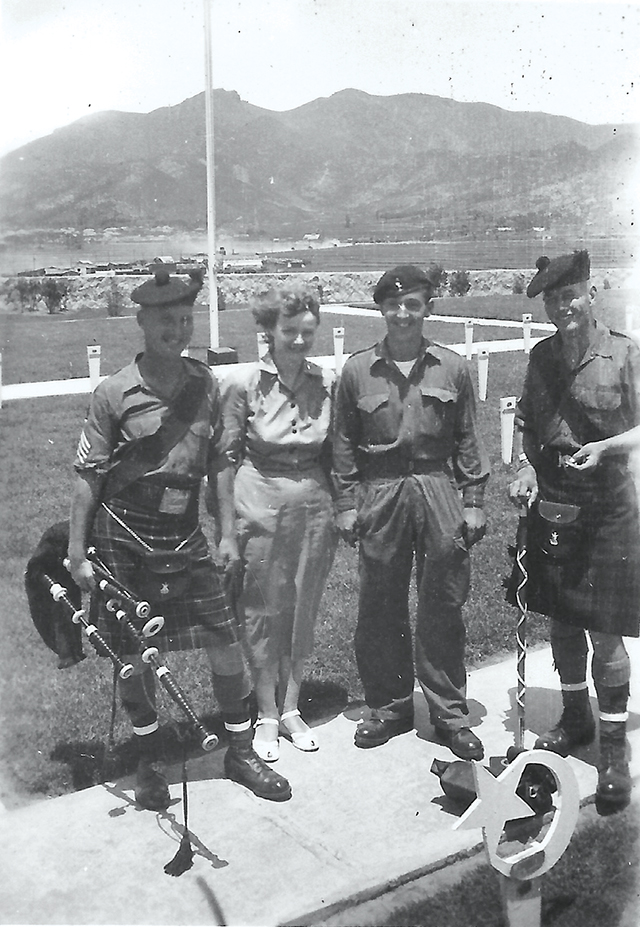 Beryl goes to the wars

Stephen Wade looks at the life of a remarkable Grimsby woman, Beryl Baxter.

The Archive
I have been a writer for many years, and in that time my projects have been created for markets, often commissioned. A compelling story had not come to me, insisting that it must be written: that this life must be told. But then, a few years ago, such a story arose. Rescued from a residential home where the last of three Cleethorpes sisters had died, a massive archive came my way. One of my students told me about it, and that it was about to go to the tip. Did I want it? Oh yes.

What I didn’t know was just how massive the archive was. This eldest sister, Ruby, had kept every single scrap from her life and the life of her sister, Beryl. There had been three sisters, all precious stones: the third was Illyrine (known as Rene).

There were five large boxes of letters; three boxes of slides, three photo albums and enough ephemera to fill a parish chest. From all this came Beryl, who was born in 1914. She had served in the Second World War as a WAAF; then in Korea with the WVS, followed by the Middle East, then as matron in an orphanage, and so on, until she retired into part-time work. Beryl never married but had at least three proposals of marriage.

I had to tell her story. She looks at me now from her picture which rests on my bookshelf. But I also chose this project for the opportunity to engage in the search for my mother’s life in the war. She was yet another dressmaker, like Beryl, and I never wrote down her life either.

They were not some marginal scraps on the edge of things. We’re talking about the Second World War, The Korean War and the Middle East when it was breaking up, yet again, in the late ’50s.

She was one of three Cleethorpes sisters who all went to war, going their different ways. One sister, Ruby, married Denys Peek, later the author of a best-selling war memoir; another, Rene, served in the forces, and as for Beryl – she went to war. Beryl, who died in December 2005, after a long and eventful career which included, in the post-Korean War years, working as a matron at the Kent School in Germany (for forces families).

Beryl’s first passport has the essential information. She was born in Grimsby on 7th May 1914. She was five feet and four inches tall, with ash blonde hair and grey/blue eyes. Her signature is bold and assertive: Beryl M Baxter. On this first passport, from 1938, she is wearing a short-sleeved blouse with a zip at the neck, and her hair is permed and wavy. She looks formal, posed and yet relaxed.

‘Abroad’ was to be the key word of her life; a mystical, magnetic word, brimming with the appeal of the exotic; she had the yearning to be abroad ‘far from home where small experience grows’ as Shakespeare has it. Even in 1933, when she was at home and her mother was abroad, she wrote to her in terms that suggest that time away is valuable, special: ‘How’s the holiday? I’ll bet you’re enjoying your little old self judging by your letter to Waltham. I’ve lots to tell you when you get back, but I shouldn’t hurry if aunty wants you. The change’ll do you a world of good.’

In contrast, life back home is far from pleasant and deserves some satire, but it’s done in fun and with a whimsical, entertaining tone: ‘We, Ethel and I, have had a hectic week, believe me. Mime has been in bed with an attack of pleurisy since last Tuesday… It’s lovely, just the two of us, and no nattering. I’ve just upset the ink, no damage done… Rene seems to like housekeeping… she says she got tired of saying to different tradesmen, “How much are the carrots please?” or “What are the cabbages like?”… Another pause. I’ve just got tea over. Need I add that The Elms is over-run with Fawcetts. We’ve had two to tea. More pots!’

The Family
Her family, the Baxters and Drivers, were at that time still feeling the shock of the Great War and its terrible aftermath of flu and unemployment. Both strands of her family were toilers for Britain, and when war with Germany arrived, off went the men to war. Two of their young men had died; one, Lawrence, was just 19 when he lost his life in the trenches. In the 1920s they slowly recovered, as everyone did. Their working-class morals, outlook and lifestyles gave the next generation, born in the war or just before it, a sound, strong basis for progress. Life was tough but the rewards of hard work and commitment were inestimable.

The family ethos was astoundingly strong. The letters home from the trenches written by Beryl’s uncles are marked by emotional and hearty enquiries after the health of the ‘kiddies’ and every letter ends with several rows of crosses for kisses. The war had come and asked for their allegiance and their sacrifice, and it was to happen again in 1939. That was when the three sisters went to war.

They all went into the WAAF. The Battle of Britain created that urgency of having a well trained and numerous corps of RAF personnel in all departments, from the fighter pilots to the backroom workers. Women, in their thousands, went into the training process for plotting in relation to air-sea rescue and into logging and communicating in the networks supporting the pilots. As the Blitz intensified between late 1939 and 1941, air force bases opened up into full operation, and the women were dispersed across the land. Beryl and her sisters Rene and Chris (Ruby) wrote home and to each other from places far and wide, and Beryl herself started her forces life at Bridgnorth, as a tailor in the WAAF, followed closely by plotter training at Silloth in Cumberland.

Beryl had enjoyed her first passport-stamp before war broke out: she and Chris had been to Belgium for a short holiday, and Beryl wrote home with a hint of the documentarist and people-watcher that she was to become:
‘We arrived safely and have just been to a wedding in the church here… rather a rough crossing but interesting people. Fun working all money into francs and centimes. Only a few English here, but Belgians are charming…’

Now she was to have ample opportunity to write about every little scrap of experience that came her way. Everything for Beryl was grist to the mill of life’s constant fascination.

At Bridgnorth, her first work was in her trade of tailoring. After leaving school, Beryl had gained her City and Guilds certificate in dressmaking; this was in 1938 and she passed the second class in the ordinary examination. She added to this with a first aid qualification from the St John Ambulance Association, just a few months after war broke out in 1939. She was then, and always in her life, relentlessly self-improving. Everything was tied to the notion of making a living and being useful. Although the family’s business in Grimsby had been in coal storage and delivery, all the off-shoots for the women members had been in dressmaking. Her mother ran a dressmaking and millinery shop in Weelsby Street, Grimsby for which her invoices advertised ‘ladies’ own material made up’ and ‘children’s wear a speciality.’

The WAAF
The WAAF – Women’s Auxiliary Air Force – had been formed in 1918 under another name, but the WAAF as such began in June 1939. Beryl joined them long before conscription of women started in 1941. Women were to staff home installations, and did any kind of task that might become necessary, from parachute packing to studying photographs. They really came into their own when they were needed in aircraft control, in radar and in the plotting work in operations centres. When Beryl started she was training for some time, and doing mundane jobs, using her dressmaking skills, but by 1943, she was smart enough to be a plotter, and that meant that she learned how to help in the co-ordination of fighter assaults against the Luftwaffe.

She started her WAAF career with the No.1 Depot, hut 63, No. 3 Wing, No. 4 Squadron in 1940 and a life in letters began. The sisters all wrote regularly and copiously. It was not simply a way to kill some leisure time: it was a necessity and a duty. In their letters home and to each other, they often complained that one or other had allowed too long a gap to grow between missives. One was expected to communicate, even if the material for reportage was sparse or mundane. Of course, this was in wartime, and so letters were reminders than the loved one was still well. There was always some kind of malady assailing the sisters and their mother. Many letters are peppered with references to heavy colds, sore throats and sometimes more serious illness. Rene was particularly susceptible to bugs. But Beryl was all joie de vivre and excitement. She reported on everything, from ironing to nights out at the pictures, with brio and exactitude.