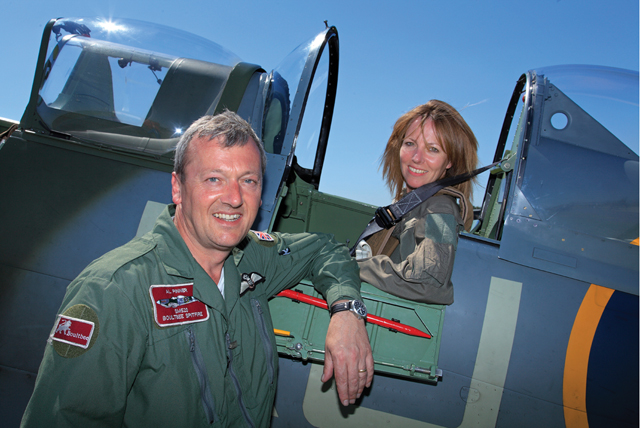 Bitten by the bug to fly

Oh! I have slipped the surly bonds of earth,
And danced the skies on laughter-silvered wings;
Sunward I’ve climbed, and joined the tumbling mirth
Of sun-split clouds, – and done a hundred things
You have not dreamed of – Wheeled and soared and swung
High in the sunlit silence. Hov’ring there
I’ve chased the shouting wind along, and flung
My eager craft through footless halls of air…

Up, up the long, delirious, burning blue
I’ve topped the wind-swept heights with easy grace
Where never lark or even eagle flew –
And, while with silent lifting mind I’ve trod
The high untrespassed sanctity of space,
Put out my hand, and touched the face of God.

Taking off in a Boeing 747 is scary enough to have me reaching for the Sauvignon Blanc, but for some flying is better than… well, better than anything.
It’s hard for a yellowbelly like me to understand the thrill of being up in the air, but harder still to get inside the hearts and minds of those unbelievably courageous young men who took the Spitfires up to fight the Luftwaffe in the Battle of Britain during the summer and autumn of 1940. As the last surviving Battle of Britain pilot, Flight Lieutenant William Walker, died last year aged 99, the reality of piloting a Spitfire or Lancaster in their heyday is now just a legacy, passed on to those who are now fortunate enough to be able to fly them in peacetime.

One such pilot is Squadron Leader Al Pinner MBE, ex-Harrier pilot and Spitfire pilot for the Battle of Britain Memorial Flight between 2003 and 2009. I met him for lunch in Stamford, well prepared to be converted to the joy of flying without actually having to leave the ground.

He told me that his passion for flying all started when he was just a boy of fourteen at Stamford School, where he was a pupil for ten years until 1983. As a member of the school’s Combined Cadet Force he was taken up for his first flight in a Chipmunk, a basic training aircraft. It was a turning point. He was instantly “bitten by the bug to fly.” At aged seventeen he was awarded an RAF flying scholarship, and while his peers were learning to drive Al spent four weeks learning to fly in a Cessna 150. He got his pilot’s licence before his driving licence.

While he was at London University, Al flew Bulldogs with the University of London Air Squadron. These little aircraft were “tremendous fun, they kept me sane through University,” he said. In 1986 he joined the RAF and began his training as a fast jet pilot. Based at Wittering, he flew Harriers in Iraq, Bosnia and Kosovo, and in 2002 he was awarded the MBE in recognition of his contribution to operations in the Harrier.

The story of a successful fighter pilot could end here. But Al was after what he described as “the best job in the air force, without a shadow of a doubt.” What could this be, I wonder? What could possibly be more exhilarating and rewarding for a pilot than flying some of the most sophisticated, modern fighter jets in the world?

“Every pilot in the RAF wants to fly the Spitfire,” said Al, and his dream came true when in January 2003, against much competition, he joined the Battle of Britain Memorial Flight.

The flight comprises twelve aircraft, including the Spitfire, Hurricane, Lancaster Bomber and Dakota. The planes thrill crowds with flypasts and displays at approximately 700 events a year. Al has flown over Buckingham Palace for the Royal Family and over the heads of those who flew them in period. Meeting these veterans and other people with a passion for flying was, for Al, one of the perks of the job. People from all over the world and all walks of life would come into the hangar to talk to Al about the beautiful, iconic Spitfire. He tells me of a Polish veteran who came over to talk to Al about his experiences flying with 303 squadron in 1943. The man’s family told Al later that it was the first time they had ever heard him open up about his war years.

Al also met Prince William. After he’d been taken up in a Hurricane, Al broke with protocol by asking the Prince directly if he would become patron of the Battle of Britain Memorial Flight. He was rewarded for his cheek a few weeks later with a letter from the Prince kindly accepting the role.

Currently Al is vice-president of TAG Aviation in Farnborough, where he manages all the complexities of owning an aircraft, and overseeing 300 pilots flying private jets for wealthy businessmen, famous rock stars, actors and royals from all over the world. I did try to draw some celebrity gossip out of him but he was sadly very professional and discreet.

Whenever he can Al returns to his real love, flying Spitfires at the Boultbee Flight Academy at Goodwood, where he teaches anyone who can afford it how to fly. Prices start at £5,000 for a three-day course, including flights in a Tiger Moth or Chipmunk, a Harvard and a thirty-minute flight in a two-seat Spitfire – so this is only for the wealthy or seriously obsessed who have saved for a once in a lifetime experience.

“It’s all about giving back,” said Al. “It’s a real pleasure to see the joy on someone’s face when they’re flying, and very rewarding when you’ve just taught them how to land, it’s just brilliant, and I get to keep a hand in flying wonderful old aircraft, including the Chipmunk.” Which is, of course, the plane that kickstarted his long and faithful relationship with flying.

Al’s passion for flying Spitfires is evident. He describes it as “real flying, raw flying at its best, compared to modern aircraft in which you’re managing computers and systems.” He quotes a couple of lines from a poem, which puts it beautifully into words. I went to look it up.

Finally, I think I understand.