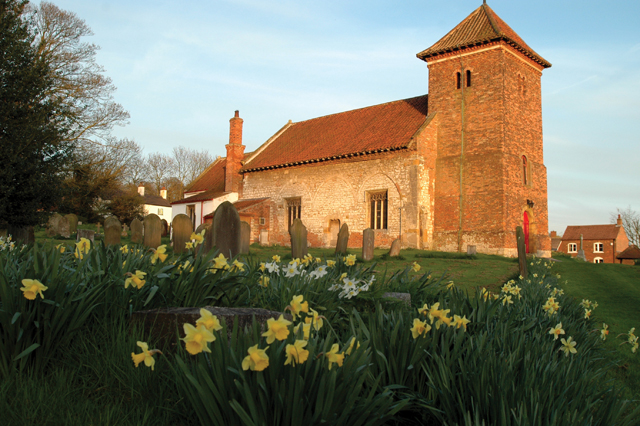 You might be forgiven for thinking that the Bishop of Ely had little to do with Bonby, North Lincolnshire. Astute, entrepreneurial and clever with politics and finances, John de Hotham seems to have led a deeply pious as well as privileged life before he died in the comfort of Somersham Palace in 1337.
Today there is not enough evidence left to find where Bonby manor was but the village’s medieval history is written in almost incomprehensible documents only the specialist can read and translate. Fortunately, much of it is transferred to the Internet and the descent of the manor of Bonby can be pieced together.

Bonby is a small village and if you were to mention it beyond North Lincolnshire the response would be a furrowed brow and the question, ‘where?’ The famous date of 1066 saw a revolution in the culture and people of this country. It is best documented with the equally as famous Domesday book of 1086. Bonby is a tiny strip of land just one mile wide and four miles between the River Ancholme and what is now the B1206. It was shared by seven Anglo-Saxon thanes: Domesday names three – Aldo, Merdo and Grinchel. Like everywhere else in England their land was redistributed and the owner of Bundebi (Bonby) as it is recorded, was Hugh son of (fitz) Baldric. Probably one seventh of this, previously held by Copsi, went to the better known Norman, Ralf de Mortemer. Although obscure, I can’t help wondering whether this small portion was associated with the elusive water mill that may have been in Bonby at this time.

Domesday records no church here but it is known that the further north the scribes who recorded the Domesday data went, the less they recorded so it does not mean a church or watermill did not exist but may have been dilapidated and not worth anything to the crown. It is said Bonby’s St Andrew’s bears Anglo-Saxon traits so in 1199, the beginning of the reign of the notorious King John, there must have been an existing church for it to be given as part of a package to Merton and they in turn handed the church to the Benedictine priory of St Fromond’s in Normandy. How many monks came is unknown but it remained a cell of the mother priory with no prior of its own. Records tell us that a priory was erected in Bonby but it was probably no more than a ‘lean-to’ which housed one or two monks. St Fromond’s monks shared St Andrew’s with a vicar/parson (depending on which records you read) caring for the souls and tithes of the locals. It was a condition put upon the vicar that he lived on vicarage land in the centre of the village. The last buildings were sadly demolished without record in the early twenty-first century to make way for a modern bungalow. Little is known about the priory except they were granted two tuns of the best Gascony red wine each year. That’s two happy monks!

In this period the manor owners probably never visited. They certainly did not live there. The twelfth century records are scant but a document called the Lindsey Survey (1115-1118) shows the emergence of two well known, big land owners sharing Bonby. Robert de Humet (constable of Normandy) owned seven carucates and William de Vesci had four bovates. Bearing in mind that conversions vary, it is about 840 acres and fifteen acres respectively so the split is still rather uneven.

No one in Bonby was significant enough to warrant a record until the manor came into the hands of the Constantyn’s. In 1318 John de Hotham bought the manor of Bonby and was granted a license for a fair on a Wednesday. It was also the year he was consecrated as Bishop of Ely. He became chancellor of England in 1327 and had the ear of the king. Living through some tumultuous times, he surreptitiously changed sides when the king was deposed because of his ‘favourites’ Gaveston and Despenser, somehow keeping his head. Upon the bishop’s death in 1337 the manor passed to his nephew, also John de Hotham. It is recorded that in 1349 he was a member of the committee looking into Ancholme flooding and he was known as Sir John de Hotham of Bonby so it is likely he actually lived in Bonby. He was also quite a hothead, being called before the king in January 1350 for cutting off the hand of a servant whilst hunting in Rockingham forest. This John left the manor to his wife Ivetta when he died in September 1351 leaving no heir. Did he die in one of the two French battles that year or did he succumb to the plague for it is known to have decimated Bonby and neighbouring Saxby. The following year the vicar was replaced too but how long did it take Bonby to recover? In 1375 the little village was described as ‘waste and without buildings, the land lies untilled in a sandy and stoney place and the meadows, pastures and marshes are flooded by the river Ankholm.’ However, it was not quite deserted. Ivetta kept Bonby until 1356 when she handed it to her sister, Alice. Alice’s first marriage was, ironically enough, to Hugh le Despenser. The Despensers seemed cursed for in 1400 Thomas Despenser was executed leaving his son a minor and the manor went back to Henry IV. It was passed around between titled Yorkshire families before Henry Skerne of Waltham proved through his family tree, that he was the rightful owner of Bonby manor. Having wrenched it from the hands of the nobles he promptly let it go to ruin. Bonby’s one and only noteworthy owner seems to have been the illustrious Bishop of Ely, John de Hotham.

Like all alien priories, the priory of St Fromond ran foul of the war with France (1337-1453) long before most were ousted. There seems to have been some underhand deal to try and save it by illegally granting it to London Charter house but the king found out and on 4th April 1403 both Bonby priory and rectory were granted to the Carthusians of Beauvale, Nottingham after which the priory was heard of no more.

The north side of the church, which today is almost ten degrees from a true east/west line, used to have an aisle. Four of the arches remain as a reminder of a different church but maybe they are simply a representation of what was. Whether the west column has been moved into the church or the arches are not where they were when built, they no longer line up. The windows suggest a fifteenth century makeover and it is likely the aisle was removed after the monks left. Maybe it no longer needed to be that size just two generations after the plague or perhaps the cost of renovation was beyond the means of the parish. Fortunately it mostly escaped the big Victorian rebuilding fashion and has a mostly original south façade but however many times it fell into near ruin and underwent restoration, the scars of its history can clearly be seen in it walls. With no sign of the manor, John de Hotham or the monks of St Fromond, it is still a church worth visiting.