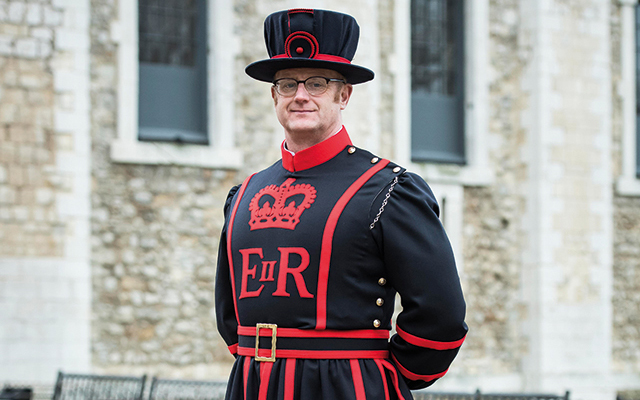 Yeoman Warders – more commonly known as Beefeaters – have been guarding the Tower of London since Tudor times. Chris Clawson, from Lincolnshire, tells Kate Chapman what it means to be the latest to take on the iconic role.
Yeoman Warder Clawson, who grew up in Boston, has made the move to the London landmark after more than thirty years’ distinguished service in the Royal Air Force, during which time he toured Iraq, Northern Ireland and Oman.

Since starting his new appointment in January, he has been learning word-for-word the story – the script of the famous Yeoman Warder tour – before being allowed to lead a tour himself. He has also been familiarising himself with the twenty-one separate duties the Yeoman Warders carry out every day as they guard the infamous Crown Jewels and keep the tower safe.

“I am incredibly proud to be the first recorded Yeoman Warder from Boston and I can’t wait to get to grips with this unique job,” he said.

“It is incredibly surreal to say I now live at the Tower of London; you are just immersed in the history and grandeur of it all. Throughout my life I have always set goals and this is one of those once-in-a-lifetime opportunities!”

Yeoman Warder Clawson had always admired the warder’s role – whose Beefeater nickname is thought to have derived from their position in the Royal Bodyguard, which permitted them to eat as much beef as they wanted from the king’s table – but never dreamt he might one day wear the famous blue and red uniform.

In order to qualify to apply for the much coveted job, Yeoman Warders must have served in the armed forces for at least twenty-two years, reaching the rank of warrant officer, and they must also have been awarded the long service and good conduct medal.

Yeoman Warder Clawson received his Meritorious Service Medal in HM The Queen’s Birthday Honours last year and decided he had nothing to lose when a vacancy became available.

The father of two said: “After filling out my CV online I was selected, along with fifteen others to go for an interview, which involved a series of table top exercises and one-on-one interviews.

“Fortunately I was lucky enough to be invited back for a second interview, when I had to learn one of the ceremonies to present and also had to give a presentation about the ravens.

“I just remember thinking these jobs do not come around very often, I was really thinking of the future as I still had four years left to go with the RAF.

“I love history; I always have since school, when I was lucky enough to have quite an inspirational history teacher and I think that being from Boston has really helped too. I find myself talking about history a lot. Many people don’t know about the history of Boston and Lincolnshire, things like Matthew Flinders, the Pilgrim Fathers and the Boston Stump; I love sharing those stories and I think that’s helped me towards gaining this iconic job.”

The Yeoman Warders are descended from the ancient band of warders who guarded the gates and royal prisoners, early in the Tower’s history.

Modern Yeoman Warders are still Extraordinary Members of the Queen’s Bodyguard and today they combine their traditional ceremonial role with a love of history to make the past come to life for visitors.

As well as safeguarding the Tower of London and giving guided tours, Yeoman Warders are also the Royal Bodyguard during state occasions including coronations, lying in state and the Lord Mayor’s Show among others, when they don their iconic red ceremonial uniform.

They also take part in a number of daily duties, many dating back centuries such as the Ceremony of the Keys – the ceremonial locking and unlocking of the fortress – impressive gun salutes on the wharf, Constable’s Dues and the ancient Beating the Bounds.

All thirty-seven Yeoman Warders live within the tower walls and Yeoman Warder Clawson has joined them, taking up residence in a flat located inside the outer walls.

“My flat was constructed in 1280 – you just wake up to history every morning,” he says.

“And there’s 900 years of it. I’m currently on six months’ probation, learning all the various roles and the story – you have to learn it all word-for-word, so there are lots of early mornings and late nights. I’m still on the first part before I get into the murder and intrigue, and then the romance.”

Yeoman Warder Clawson grew up in Boston, attending Kitwood Boys’ School before taking a job with Craven & Nicholas Engineering in the town. He joined the RAF thirty years ago and was mostly based in Coningsby and Scampton, where he enjoyed a brief stint as ground crew on the Red Arrows.

Prior to making his move to London he was a flight sergeant based at MoD Abbey Wood. In his spare time he is a campervan enthusiast and rugby fanatic, having represented the RAF Rugby Union team at veteran’s level as well as playing for Boston Rugby Club.

“My previous role has helped prepare me for this one – I was going out and meeting lots of people from lots of different nations, I’ve done that all throughout my career, so I understand different cultures.

“I like to get back to Lincolnshire as much as I can to visit family, and I love watching Boston United, although now living in London I’m surrounded by Arsenal and Chelsea fans and had to explain who Boston United were!

“It’s very strange living in the city; I moved to Bath for my last post, that was a bit of a step up but it’s still very quaint and now I’m sat here at the gateway to London.

“I’ve had to keep up with technology and buy an Oyster card, but all in all it’s proving to be a fantastic experience. When I get a bit of time I like to go out and sit, looking out over the Shard, or some other iconic building.

“To get the opportunity to do this job is such a huge privilege. I still keep having to pinch myself, I am very lucky as I never really believed this would happen – it’s like Christmas every day.”