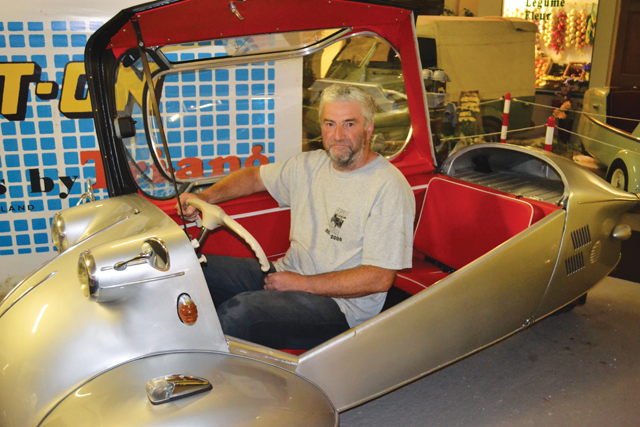 The best things come in small packages, and for the Lincolnshire couple who run the country’s only dedicated bubblecar museum, the old saying couldn’t be more apt.
Microcars – the tiny, efficient vehicles powered by an engine less than 700cc in size – were extremely popular during the 1950s and 60s, and are an important part of the nation’s motoring history. It was the lack of a museum devoted to these weird and wonderful machines that led Mike and Paula Cooper to bite the bullet and set up their own.

Now they have more than fifty vehicles – including cars, scooters, commercials and even a hovercraft from makes such as Bond, Isetta, Reliant, Frisky and Bambi – on show at their premises in Langrick, near Boston.

Although the cars are the stars, The National Bubblecar and Microcar Museum promises visitors a real 1950s experience, with shops from the era recreated and ready for exploring, alongside memorabilia plus a gift shop selling items linked to the decade, like tin plate toys, number plates and soft furnishings. The couple are also championing local produce, including homemade jams and chutneys alongside their own home-brewed Clover Farm cider.

They also provide extensive camping and caravanning facilities including fresh water, toilets and showers, plus an attractive tree-lined area ideal for hosting rallies and other events and a cafe.

For the Coopers it’s been a lifelong love affair with these cute little cars which has made them keen to share motoring memories.

“When we got together we used to do small Citroën restoration 2CVs, Dyanes and tiny Citroën vans down in Somerset,” Paula recalled.

“We eventually sold that business and moved up here to Lincolnshire, bought somewhere near Sleaford with some land, and thought we weren’t going to do much to be honest.

“But we’ve always been into the microcar movement, and interested in all the different clubs and makes. And then someone said there ought to be a microcar museum.

“There isn’t one anywhere else, and not even a lot in Europe apart from one in Germany, and nothing that concentrated on the era, when Britain was really involved in things like making these cars, so we decided we’d set one up.”

The couple already had a small collection of cars, which they were constantly updating, buying and selling, and put them on display for the public to share and enjoy with great success.

From the beginning of motoring three-wheelers have always been popular in this country, Paula said, with Morgan being one of the best known makes.

The early cars were noisy and fun, but also uncomfortable and generally not perceived as everyday transport. But this new emerging type of little car was being aimed at the masses. Numerous makes and models rolled off the production lines in Great Britain, including Bonds, followed by Frisky, Coronet, Reliant, Berkley, Noble and Scootacar to name a few. And these little machines ranged in price from £300–£500 approximately, when the average wage was £20 to £50 per week.

Marketed as family vehicles, the name bubblecar stems from the rounded windows and dome shaped tops of makes such as the Isetta, Heinkel and Messerschmitt.

Their popularity wasn’t limited to our shores either – microcars were made across the continent in Germany, Spain, Italy, Holland and even in Japan and America. And given their economic credentials there’s been renewed interest in them of late with the emergence of Smart, Ligier and Microcar.

As time progressed the Coopers sought to expand their displays further and they eventually decided to move to Clover Farm a couple of years ago, where there was much more space to suit their needs.

“We’ve had a terrific amount of support from Boston since moving here, it’s just been wonderful,” Paula said.

“Our collection just evolves all the time, and we try and change it each season to keep it interesting for people. Even during the season we change three or four of the vehicles.

“Most motor museums have a few microcars, but not a big collection of them. They’re not massively hard to find – you can buy them from around £3–4,000 although some of the rarer ones can go for up to £60,000.

“The 1950s is an era people around can remember, and they were interesting times; as a country we were just coming out economic depression following the war.

“I remember when I was at school most people hadn’t got a car – buying one was a big step back then. People usually maintained their own motorbikes, but they got a car and there was a fair amount of maintenance.

“Microcars were ideal though – people went from having a scooter, then when they got a partner they added a sidecar and when it came to having a family, microcars were the obvious next step.

“They weren’t expected to last very long, so it’s thanks to many owners’ clubs, rally organisers and fanatical collectors that we have many of these vehicles here today.”

When it comes to looking after their collection – which includes English Berkley, Bond and Reliant Regals, as well as German Goggomobil and Messerschmitts, a French Ligier and Italian Fiat 126 – the Coopers do all their own work.

They’re even hoping to add some maintenance workshops to their events calendar and are also planning to start stocking spare parts, which sometimes prove hard to come by, for other enthusiasts.

The Bubblecar Museum, Clover Farm, Main Road, Langrick, PE22 7AW, is open Friday – Sunday and Bank Holidays from 10am to 5pm (last admission is 4pm), from March until October.