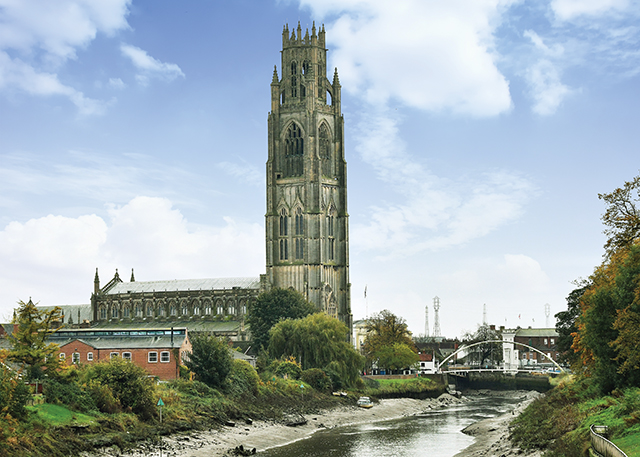 Boston’s profile is on the rise!

Extra vitality has been breathed into Boston town centre creating an added buzz for this popular destination in the run-up to Christmas, as Glynis Fox reports.

After months of seeing two of the town’s larger retail premises lie empty, fresh investment has brought a real boost to the town’s retail scene and cheered up many shoppers.

Weeks after seeing its windows firmly under wraps, the tills are ringing once again in Boston’s former Oldrids department store in Strait Bargate.

A £2 million investment has given birth to Rebos – a move which has also created new town centre jobs.
Step inside the town’s newest flagship store and you will find a wide range of stock displayed on every floor, including familiar and new brands.

Rebos is aiming to provide plenty for the whole family, from men’s, women’s and children’s clothing to shoes, luggage, household linens, toys, handbags, jewellery and cosmetics, at prices to suit a range of pockets.

The layout is bright and airy and, slightly comfortingly, many departments are where former shoppers would expect to find them. On my visit, I also found the staff friendly, enthusiastic and helpful.

Customers can access the airy coffee shop on the ground floor – which is a great spot for a quick refreshment stop before starting to shop, or after you have ticked every present off your Christmas list!

Upstairs, former and new shoppers alike, will be delighted to find that the store’s highly popular restaurant is also “back in business” and Rebos is serving up everything from hot and cold meals to sweets and snacks – including those famous scones!

Boston has also been improved visually by Poundland’s move into the town’s former Marks & Spencer store, which overlooks the Market Place and which had previously been closed for more than two years.

Poundland’s newest store sells a massive variety of goods, including general foodstuffs and frozen fare. PEP&CO clothing is also being stocked, although PEP&CO continues to have its own outlet around the corner in another bustling part of town, Pescod Square.

Pescod Square is home to mobile phone, fashion, DIY and coffee shops with Waterstones and Next at the top of the Square, which opens into Wide Bargate.

Further along in Wide Bargate, you’ll find two long-standing businesses – Cammacks and Coneys of Boston. Cammacks is family-owned, now run by fourth and fifth generation members, and has been a feature of the town’s business scene for more than a century.

Shoppers looking for traditional and contemporary furniture – from wardrobes and dressing tables to sofas, chairs, living room, dining and cabinet furniture, as well as mirrors, pictures and gifts – will find themselves spoilt for choice. Allow some time – there are four floors to browse!

Nearby Coneys of Boston has a history stretching back to 1856 when it was based in Strait Bargate. It moved to Wide Bargate in 1956 when it became a limited company. Today it is trading under the leadership of managing director Scott Crowson and boasts a wide range of designer men’s and ladies’ fashions.

Other areas of the town worth exploring include Boston Shopping Park, off Horncastle Road, the Waterfall Plaza in Church Close, Pen Street and West Street.

Boston had a boost earlier this year when it received news of £21 million-plus in funding under the Town Deal scheme – unlocking money which promises to give a real shot in the arm when it comes to achieving economic growth.

A Boston Borough Council spokesperson said: “We were absolutely delighted to receive £21.9m from the government to deliver our town deal projects in Boston.

“Our plans to invest this in the town are incredibly ambitious, with a fantastic group of projects which are aimed at creating jobs by investing in education, tourism, infrastructure and skills.”

Included in the list are: The Centre for Food & Logistics: Led by the University of Lincoln in partnership with Boston College – the project will develop a food trade and logistics skills, knowledge and innovation hub with local, national and global outreach.

Boston’s Railway Station Improvements: This will enable the delivery of a new community/retail café facility by developing the redundant unit between the ticket hall and the existing restaurant unit, providing a new welcoming hub to the centre of the station building.

This will enhance this architectural, educational and cultural asset for the town.

The above is just a taster of some of the brilliant projects that Boston will be bringing forward over the coming months and readers are urged to keep an eye on Boston Borough Council channels for updates as work progresses.

The spokesman added: “All these projects will build on the wonderful work that we’ve already been able to achieve through the accelerated funding we received from government in 2020, including the 3G Pitch Development at Haven High Academy, the Boston College Digital, Transport and Logistics Academy, the Boston Town Heritage project – delivered in partnership with Heritage Lincolnshire – and the Experience Boston project.”

ROADS FUNDING WELCOMED
Boston Borough Council – which is part of the South & East Lincolnshire Councils Partnership – has welcomed news that the county council has been awarded more than £19.5 million for improvements to the A16 corridor.
The money is from the Government’s Levelling Up Fund and is expected to make a real impact on the sub-region’s vibrant and valuable food sector.

The A16 corridor is a key route for the agri-food sector, which is a major economic asset for South Lincolnshire and the news is seen as good for both Boston and Spalding.

Boston Borough Council and Lincolnshire County Councillor Paul Skinner said: “The success of this bid further builds upon the Town Deal projects to enable Boston to maximise the levelling up agenda and ensure that our economic growth for the whole of our community continues to proceed at pace.”

HONORARY FREEDOM AWARDED
England’s deputy chief medical officer Professor Jonathan Van-Tam is to be awarded Honorary Freedom of the Borough of his hometown of Boston – after accepting this honour from Boston Borough Council.

As we went to press, we were unable to say when the formal presentation ceremony would take place, but it will recognise Professor Van-Tam’s achievements in supporting the whole country during the Coronavirus pandemic.

Boston Mayor, Councillor Frank Pickett said: “Professor Van-Tam has played an incredibly important part in the country’s response to the pandemic. Arguably, he has become one of the most recognisable people in the country over the past 18 months.”

He said everyone was incredibly grateful for the work he had done. Offering him the Freedom of the Borough seemed like the very least the town could do to recognise those contributions, as well as his ongoing support for Boston.

In addition to his well-documented support for local football club Boston United, the Professor had returned to the town to participate in talks with schools. He had also helped to roll out Covid-19 vaccinations through the “grab a jab” initiative at the Princess Royal Sports Arena.

PLANNING A PERSONALISED FINAL FAREWELL
Based in Boston, Carr Funeral Service has a long and proud tradition of helping the community cope with loss, taking care of every individual client’s preferred choices, while offering a dignified experience.

Founded in 1909, the highly experienced team of caring Funeral Directors seek to provide families with a funeral which reflects both the wishes of the deceased and those left behind, in a fitting and respectful way.

“Arranging a funeral after losing a loved one is often a difficult and stressful time for family and friends. We are here to support everyone of all different backgrounds and faiths. Indeed, as one of the oldest Funeral Directors in the area, we view our role of helping those in need as an honour and a privilege.”

Carr Funeral Service offers caring, compassionate and bespoke services to all members of the community, accommodating mourners’ specific cultural and religious requirements, from a very simple funeral to something quite elaborate and everything else in between. Their aim is to help and advise with all the practical arrangements and by so doing, take the stress and strain away from family and loved ones.

Their motto is ‘A Tradition of Dignity and Total Care’.