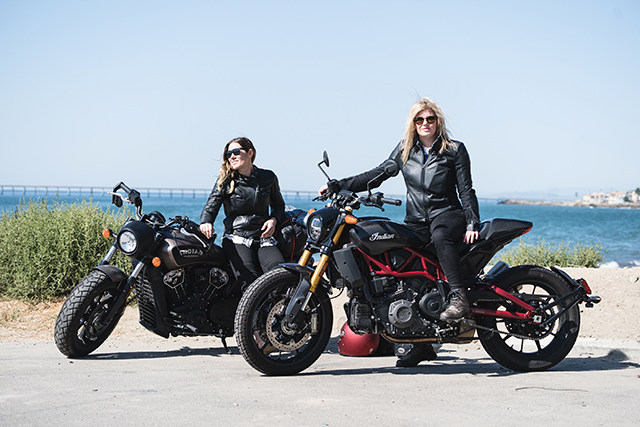 There are no women’s categories in Pro Flat Track racing, but as Kate Chapman learns, that hasn’t stopped Lincolnshire’s Leah Tokelove taking on some of the best riders in the world – and coming out on top.

The 22-year-old got her first motorbike when she was 5 and began racing them aged 13. Now she’s really making waves as the only female Pro Flat Track racer in Europe and she also competes in Hooligan racing, where riders use heavier and more powerful bikes that aren’t designed to be ridden on dirt tracks.

In 2018 Leah, who lives near Woodhall Spa, finished second in both the highly competitive British and European Hooligan championships, racing in Holland, Spain and her native Lincolnshire for the latter event.

Last year she returned from California after taking her Indian Motorbike overseas to compete in three Hooligan races on American soil, as well as taking time to enjoy the scenery and riding out with other female bikers.

“It was quite a year,” smiles Leah, who is nicknamed the Hooligan with Pigtails, “I’ve had some great opportunities and met some fabulous people and that really sums up the motorcycling community – there’s just a great sense of friendship.

“For me, racing gives me my adrenalin fix, plus I really like challenging myself. I love racing but after gaining my road licence earlier this year I’ve found riding on the road is fun too.

“If you’re in a car you obviously get to ride safe, but on a motorcycle you experience something different – you’re out there in the elements, there’s a feeling of freedom, especially here in Lincolnshire where there are some lovely routes.”

Leah started flat track racing as a teenager. Its riders use converted motocross or purpose-built bikes to race around dirt ovals. Competitors head into the first corner in a tight pack, muscling for position and slide their bikes sideways on the dirt at impressive speeds – upwards of 70mph.

Hooligan racing follows the same concept, but riders use bigger, heavier and more powerful bikes that aren’t supposed to be raced on dirt tracks.

Leah’s flat track bike weighs 100kg with 450cc of engine power. Her Hooligan bike is over twice the weight with 1200cc of power – and she can’t touch the floor due to the size of the machine.

But even she admits she never set out to race, her interest in bikes was sparked by her Dad, Jason, who is a keen rider and bought Leah her first one.

“My first bike was a Yamaha PW50,” recalls Leah, “It was just a really small bike to see if I would be interested and it started from there.

“I don’t really remember too much but looking back at the photos you could see I enjoyed it and used to go out on them quite a lot.

“We had a dress up day at primary school, all the other girls went as ballerinas and vets and I was there in my motocross gear! It was fun and nice for my Dad to be able to share his passion with me.

“We just rode around the fields where the local farmers allowed us to, a lot of the time on wasteland. Because of where we were, out in the countryside, we just had to make our own fun and for me that was going out on the bikes.”

It was after she spent one summer holiday riding her bike every day her Dad suggested she try racing. They went to Mabelthorpe to compete on the sand track and from then Leah was hooked.

“I was always quite competitive and sporty at school – I played a lot of hockey – but I’d never really considered racing myself,” adds Leah, who is sponsored by Indian Motorcycle, one of America’s oldest motorcycle brands, which has a dealership at Chris Walker Kawasaki, in Grantham.

“I wasn’t really aware of any female riders, so didn’t have anything to relate to and couldn’t see myself doing it. But with a bit of encouragement from Dad, things really took off and I started racing on an oval regularly, taking part in flat track national competitions in the summer and then during the winter I’d race on the beach.

“Now I’ve worked my way up to the pro class. There are a couple of other women, but they’re not making the finals and getting on the podium.

“When I first started there’d be other little girls but most of them lost interest, now when I take my helmet off, or people see me riding down the road they stare at me, I suppose it is a bit uncommon to see a woman of my age into bikes.

“I don’t generally have any problems though, although some of the blokes take the mickey out of each other when they lose to a girl – but I just tell them ‘no, you lost to a better rider!’ I want to be a role model and encourage other women to ride too.”

It’s been a long-held dream for Leah to ride in America, and she was thrilled to immerse herself in its motorcycling community, riding out, meeting up with other female bikers – including her idol Jolene Van Vugt – and racing.

She competed in three Hooligan races, finishing in the top eight in two finals and claiming second in her LCQ Heat at the Moto Beach Classic festival in front of thousands of fans and the best riders on the planet.

“I went out earlier last year for a holiday on a bit of a fact-finding mission,” says Leah, who is due to graduate from Hull University with a business studies degree next summer.

“I just needed to meet some people who could help me out with things if I were to go and race over there, and then I got my sponsors on board too.

“It was a dream trip – riding in the deserts and the mountains was awesome. I rode out to a fantastic event called Babes in the Dirt, which was attended by about 3,000 women, with my idol Jolene.

“I watched her on this show called Nitro Circus when I was younger, and she was just amazing, we got on so well.

“It’s just been an absolute dream. I made some friends for life and got to race in America, I definitely want to go back as well as on similar trips to other places.”

As for the future, Leah is just keen to keep riding, racing and encouraging other women to give the sport a go – which she does through her own school here in Lincolnshire.

“It’s a really great project, there are a lot of women who want to ride, but still find that there are barriers against them,” she adds.

“Anything from just having somewhere to go or having someone to teach them. We have so many people come from London to train with us it’s crazy, but I love doing it alongside my own racing and riding.

“I love helping and encouraging others too – it’s just great being part of the biking community.”

To keep up to date with Leah’s news and progress visit www.leahtokelove.com