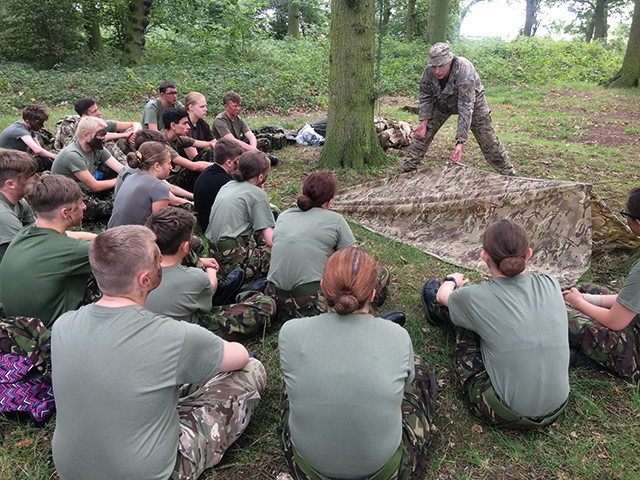 The Air Cadets celebrated their milestone 75th anniversary last year. Trent Wing Air Training Corps (Lincolnshire, Nottinghamshire and Derbyshire) invites their young people aged from 12 to 20 to Beckingham Training Camp each summer for a week of instruction in skills and leadership.
Wing Commander Tony Wright, Officer Commanding Trent Wing welcomed nearly 300 of the 1,300 cadets in units across the three counties to the extensive facilities the camp offers.

“There are sixteen units in towns in Lincolnshire, from Grimsby to Grantham and more than 40,000 cadets nationally,” Wing Commander Wright explained. “We are an organisation which relies on the voluntary staff who give up their time to run the squadrons and camps. We have a small team based at RAF Digby which provides the administrative support but otherwise this is a youth organisation led by over 400 uniformed and civilian volunteers in our Wing.”

The cadets are drawn from a broad spectrum of backgrounds and some can find the first experience of being away from home challenging but the skills they are taught transfer well to CVs and personal statements for the rest of their lives.

Squadron Leader Rachel Needham is a former Air Cadet herself whose full-time career is in human resources at the University of Nottingham. A volunteer herself, she is responsible for the recruitment, training and development of the volunteers as well as overseeing the activity schedule for the week. “We have over seventy volunteer staff here to run the summer camp and each of these people bring their own unique skills, from field craft, to leadership, to helping to run the NAAFI. Volunteering is not age dependent either – just the ambition to be cadet focussed and be willing to give up time for a couple of evenings a week and for some weekend activities too.”

All volunteers are DBS vetted and receive their own personal development programme as part of the important child safety procedures in place for each unit.

For the young people attending the multi-activity camp there is a packed programme of full bore shooting, adventure training, field craft (including First Aid, concealment and movement), drill, cooking their ration packs outdoors and kayaking. Attendees are allocated into a flight of twenty-four people of mixed age, gender and background. It is within this structure that older recruits take leadership responsibility and instruct fellow cadets in skills they have already acquired.

For cadets who take every opportunity which the Air Corps can offer there are overseas camps, adventure training in Wales and the Lake District, an International Air Cadet Exchange programme and air training in gliders and light aircraft.

The standard ration packs which are issued to the cadets certainly acknowledged the calories they were burning at Beckingham Camp. If you would like to locate an Air Cadet squadron close to you, go to www.aircadets.org where you will also find details of how you could become a volunteer.