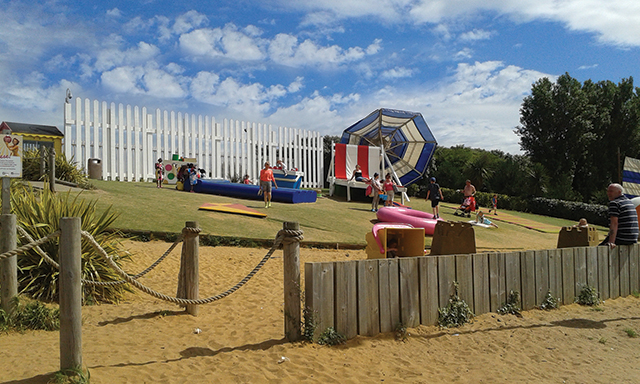 It’s 80 years since the first Butlin’s holiday camp opened its doors on the east Lincolnshire coast. We look back at the life of Billy Butlin and the legacy he left.
Over the years Butlin’s has become synonymous with great family holiday entertainment, and although the knobbly knees and glamorous granny competitions are a thing of the past it continues to pride itself on providing happy times and great family shows – come rain or shine, all year round.

The Butlin’s story began back in 1936, with William ‘Billy’ Butlin, who was born in South Africa in 1899 – the son of a well-to-do gentleman and a travelling showman’s daughter. He spent his childhood in England, South Africa and Canada and following a stint in the Canadian army landed in Liverpool with just £5 in his pocket.

Despite little formal schooling, Billy had a keen business brain and a knack of giving people what they wanted. His first venture – which proved a real hit – was a hoopla stall which he took to fairs and shows around the West Country. In the ensuing years he built up a mini-empire of amusement parks and zoos, before a wet holiday weekend on Barry Island gave him the idea of creating a holiday camp where families could come and go as they pleased and where fun was guaranteed, no matter what the weather.

Billy designed the first camp at Skegness himself and the grand opening took place on a cold Easter Saturday in 1936 – when a peak season stay cost £2 12s 6d (£2.62) per person. It was an immediate hit and by the following year had already doubled in size.
Skegness boasted a long stretch of golden, sandy beach and was convenient for tourists from the north and midlands. Within a decade it was one of the country’s busiest resorts and others quickly followed with Butlin’s opening in Clacton-on-Sea in 1938. Nine camps were built altogether.

At their peak Billy’s resorts attracted more than a million guests in a single summer. In the drab post-war years Butlin’s promised and delivered a world far removed from anything people had experienced before – there were brightly coloured buildings with exotic names, endless activities and entertainment, wonderful flower gardens – all available for the equivalent of a week’s pay.

Billy found many clever ways to keep his camps in the headlines too – from sponsoring cross Channel swims to scouring the Court Circular for passing Royals who he could persuade to pop in for a photo opportunity.

And the Royal family weren’t the only famous faces to make an appearance – Butlin’s talent contests featured a young Paul McCartney and Catherine Zeta Jones, while Ringo Starr was playing in a Butlin’s band when he got the call inviting him to join The Beatles. Another unknown, Francis Rossi, was working as a Redcoat when he formed Status Quo with Rick Parfitt.

Billy Butlin was knighted in 1964 – but despite all his success he never forgot where it all began. When he died in 1980 he was buried in Jersey where his headstone reads ‘Skegness is so bracing’.

The key to Butlin’s success has been put down to Billy’s ability to keep his resorts fresh and exciting for guests, by constantly introducing new activities and attractions. In 1928, for example, he negotiated hard and scraped together his life savings to buy the only agency selling dodgem cars in Europe, with the first arriving on the Skegness seafront. It was a gamble that paid off, as the profits he made helped him raise the money he needed to build the camp at Skegness.

The first camps had their own dodgems, alongside thrilling fairground rides and later on miniature railways and monorails to help guests get around. Skegness even had its own airport where campers could take short pleasure flights over the town, the camp and the sea.

And it’s this ethos of making the impossible possible which still applies today. More recent additions to activities on offer at Butlin’s include water walkers – giant inflatable hamster balls for humans which allow you to literally walk on water.

The sheer number of activities on offer made Butlin’s camps unique. The original 1936 brochure for Skegness promised something for everyone – free tennis, bowls, bathing, putting green, boating and billiards, orchestral and dance music, first class concert parties and instruction in physical culture. The more adventurous were catered for too, with water-skiing on offer to campers at Minehead in the 1960s.

Each camp was a self-contained world with all the activities a holidaymaker could ever need. Entertainment in the early days at Skegness was provided mainly by volunteers from camp staff, a few semi-professional local acts and campers themselves – due to a lack of money.

As the empire grew it became a matter of pride for Billy – a showman from the start – to be able to attract the biggest showbusiness names to his resorts. Laurel and Hardy performed at Skegness while other names to entertain at Butlin’s included Bruce Forsyth, Benny Hill and Frankie Howerd.

And these days the entertainment menu is just as varied – X Factor, Britain’s Got Talent, children’s shows featuring Barney, Angelina Ballerina and Mike the Knight to name a few.

In 2013 the Skegness resort unveiled a £13m ultra-modern water park with flumes, rapids, a lazy river, wave pool and more.

It’s this continued investment and the resort’s family-centric ethos which will ensure the Butlin’s name is celebrated for many more years to come.