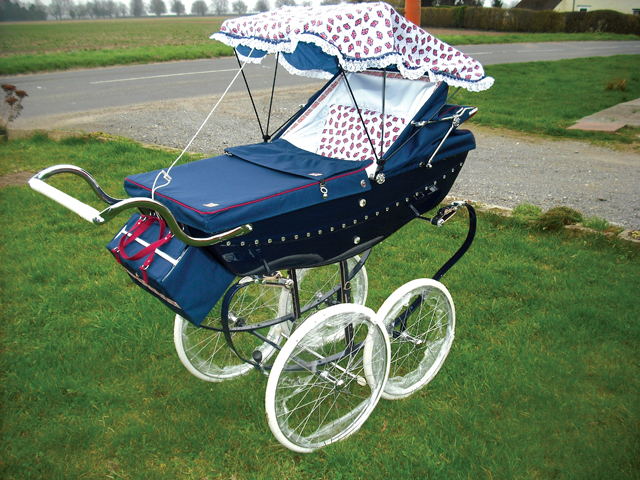 A fascination for collecting traditional, coachbuilt prams has become a successful business for Alison and Graham Richardson, who bill themselves as ‘The world’s leading pram restorers’, also hiring them out as authentic props to television and film crews.
For restoration work or to find out more contact Alison’s Baby Carriages on 01406 420067

The Richardsons, who run Alison’s Baby Carriages from their Holbeach home, have a massive collection of several hundred vintage prams, including those made by Millsons – as favoured by the Royal Family – Silver Cross, Leveson and Marmet, with some versions dating back as far as the 1890s.

They turned their passion into a business around twelve years ago, when a friend suggested they start restoring, selling and even hiring the prams out as props and since then haven’t looked back.

To date, pieces from the historic collection have appeared in TV shows and films including Upstairs Downstairs, Doc Martin, Island at War, The Importance of Being Earnest as well as the recent ITV drama Mrs Biggs, which told the life story of Charmaine, wife of the Great Train Robber Ronnie.

Back in 2010, the Richardsons sold ten prams to the BBC for its hit drama Call the Midwife – a moving and intimate insight into the world of midwifery and family life in 1950s East London. The show’s second season is due to be aired on BBC One shortly, and is based on the memoirs of former midwife Jenny Worth.

Mrs Richardson said: “If there’s anything on TV that has got a pram that doesn’t fit the period, then it’s had nothing to do with me!

“Before I sell or hire them I have to find out how well off the characters are, what area they live in, so that they get the right type of pram.

“The ones for Call the Midwife were all wrecks, to suit the period and the part of London in which it was set, at the beginning of the NHS.”

The unique collection was begun in the mid-1980s, when Mrs Richardson bought her first vintage pram at auction as a joke for her mum, and since then she has gone on to source them from far and wide, including donations, online auctions, through dealers and on occasion others have been rescued from the tip.

She freely admits she never intended to use them to make her livelihood, adding: “I did have a proper pram for my two children when they were babies. They definitely get a better ride in a coachbuilt pram. We take my granddaughter out in hers and she loves sitting up above everyone else!

“But I was always a bit of a tomboy to be honest – I was more into driving lorries than pushing prams! My marriage broke up and I got together with Graham; he used to do vintage cars and I was a dab hand at upholstery and sewing and someone suggested we start restoring the prams – so we sort of got pushed into that direction.

“Then we started restoring them for other people – they’d be family heirlooms that had been passed down and were wanted for the next generation. We only deal with the proper coachbuilt ones, mostly from the 1930s up until the present day, as Silver Cross still do a coachbuilt pram; we don’t have anything to do with today’s modern buggies.”

The couple, who describe themselves as perfectionists, work alone; Mrs Richardson deals with the restoration of the upholstery and hoods, while her husband who has a background in engineering looks after the bodywork repairs, spending up to three months at a time stripping each one back to the bare metal and rebuilding them from scratch if necessary. The only part they don’t undertake themselves is the chrome plating, which they send parts away for.

As well as restoration work for clients and hiring them out, others are sold to collectors.

Mrs Richardson believes the traditional coachbuilt prams went out of fashion because they were cumbersome and difficult to transport as more people began owning cars, although she is adamant they are just as user-friendly as today’s more slimline models.

Generations of children were brought up being wheeled about in a coachbuilt pram, with Silver Cross regarded by many as the Rolls Royce of the pram world. It has a long history dating back to 1877 and is a brand still manufactured today. But when it comes to travelling in style Mrs Richardson says the makes of Millsons and Leveson are top of the pile, favoured by the Royal Family and aristocracy.

She also agrees coachbuilt prams are expensive, but no more so than travel systems, adding that thanks to style-conscious celebrities they have started to become more popular again – her client list includes Bear Grylls, Alexandra Tolstoy and CS Lewis’s stepson. She was also requested to restore a pram for the Haynes Motor Museum, which despite its own skilled workmen sought out her expertise to carry out the necessary work.

The Richardsons have also taken on a couple more unusual projects as well, including back in 2008 when they designed and made a one-off gold plated Silver Cross pram, which eventually went on to sell at Knightsbridge department store Harrods for a four-figure sum.

Mrs Richardson explained: “There was one made years ago. It went to America and it completely disappeared, so we thought we’d have a go at doing one along those lines; all the parts were gold plated and we used gold leather. A friend of ours, Lady Grosvenor, told Harrods about it and they took it on to sell it.”

The ultimate in ‘baby bling’, which also featured a small music box and and satin interior, was snapped up after two weeks for £6,000.

Last year the Richardsons flew the British flag by coming up with their take on a Diamond Jubilee coachbuilt pram. Described as ‘a one off, limited edition’ the luxury baby carriage was completed with red, white and blue Union Jack trim and ‘diamonds’ studded along the sides. Expected to fetch a four-figure sum, it even had its own certificate of ownership, proving its exclusivity.

And who knows, now with a Royal baby on the way for the Duke and Duchess of Cambridge, maybe Mrs Richardson will be able to add another high-profile name to her client list.