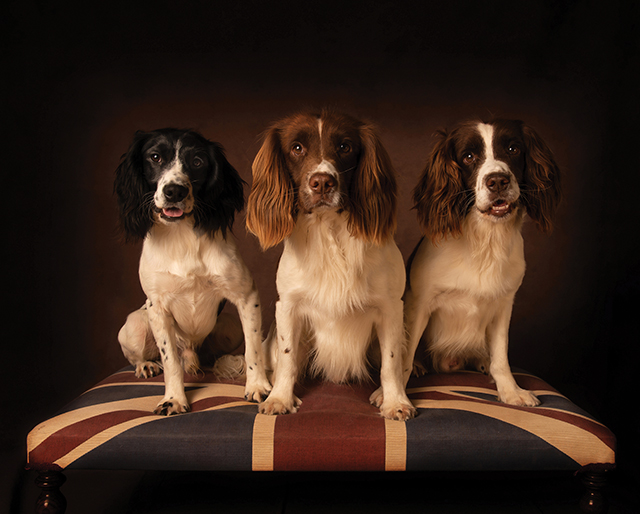 Given that one of his christening presents was an Old English Sheepdog, Nigel Ord-Smith believes it was inevitable he would one day end up working with dogs. Interview by Kate Chapman

It took a while before his dream career of photography, specialising in dog portraits, fell into place, but since launching his own business and taking stunning pictures of man’s best friend Nigel hasn’t looked back.

Over the years he has photographed thousands of dogs and loves nothing more than capturing their true character as seen through their owners’ eyes. His work has been honoured with international and national awards – including a recent image of a hairdresser’s dog sporting rollers, towel around her neck while browsing a magazine in homage to her owner’s career. He’s also used his talents to help raise valuable funds for several canine charities and re-homing sanctuaries too.

“I feel very lucky and privileged to have a business and career that I love – I just wish I’d done it much sooner,” says Nigel, “I love photographing dogs and capturing their characters. I think Border Collies are among my favourites, but I love seeing all the different breeds.

“It’s become a bit like trainspotting – there’s always lots of excitement when I get to work with a new breed and tick it off the list.

“A lot of people have problems photographing their own dogs as they’re too lively, they can’t get the lighting right and if they’re taking the photos, they can’t be in them – while with black dogs, they often struggle to pick up the detail in their coats.

“I can help with these issues; either with a studio shoot – I’m having a new one built which should be ready for the end of April – or in one of my chosen outdoor locations.”

Nigel loves photographing dogs sitting on chairs or vintage suitcases, as well as Union Jack footstools, which are great for the British breeds to pose on.

His lifelong love of dogs began when he was gifted Old English Sheepdog, Sally for his christening – the pair were inseparable for 15 years, enjoying many adventures together. His passion for photography also stems from his childhood when he enjoyed taking holiday and family photos as a hobby, but it was to be many years before the thought of combining the two occurred.

“I considered going to art college when I left school, but at the time a career in banking beckoned, eventually leading into IT,” recalls Nigel, who relocated to a village near Woodhall Spa, from Leicestershire, last year to be closer to family. “Photography remained a hobby throughout those years and it wasn’t until I approached a milestone birthday that I started to wonder ‘what if?’

“The lure of photography and working for myself, plus a desperate desire to escape the world of IT compliance, won and after some essential photography business training I had the courage to hand in my notice and start my own business full-time in August 2007.”

Initially Nigel specialised in wedding and portrait photography until, after a handful of dog portraits, he realised that’s where his true passion lay. As this aspect of his venture grew he dropped the other work and by 2013 was recognised as a specialist dog photographer, working from a rented studio on a farm, which also provided the perfect outdoor backdrop for his canine subjects.

“Over that time, I’ve photographed several thousand dogs and built up an understanding of how to get the best out of dogs with all kinds of temperaments from shy, timid rescue dogs, through less well behaved family pets, to finely tuned working dogs,” says Nigel, who is the proud owner of Pointers, Molly Moo and Martha Beans. “I like to take pictures that show eye contact, so lots of head shots – I really try to get into the soul of the dog and capture its character, as recognised by its owner.”

Animal welfare is paramount throughout Nigel’s shoot. He spends time getting to know his subject and allows the dogs to explore his studio, or chosen location, so everything is as relaxed as possible. He invites owners to be in the photos if that will help their dog feel more comfortable and has mastered techniques so leads can be used, and removed later, if necessary.

Unfortunately, the Covid pandemic has meant Nigel’s business has been closed but he is looking forward to meeting more four-legged friends when his new home studio opens and has been busy exploring new outdoor locations to work from. He’s also keen to continue working on old and new pet projects – including Hair of the Dog and another charity endeavour.

“Hair of the Dog came about by accident after we went to Crufts on the wrong day a few years ago. I was mesmerised watching the show poodles being prepared with all the coiffuring and topiary going on and knew I just had to photograph some.

“A groomer I know managed to put me in touch with a few owners and the projects has grown to include other hairy dogs, with the resulting images in a black and white, fine portraiture style. It’s an ongoing project – I’d love to do some more and then compile an e-book, or maybe an actual coffee-table style book,” says Nigel.

In addition Nigel is also planning some shoots in aid of Three Counties Dog Rescue at Bourne. For a £25 donation to the sanctuary, owners will be able to book a portrait session with Nigel at a selected location, near Bourne or Woodhall Spa, at a significantly reduced cost and will get a desk frame image from the shoot, with the opportunity to buy more pictures if they wish.

He added: “The charity offer is something that I’ve successfully run over the years with Leicestershire-based dog rescues and, in conjunction with other photographers, throughout the country with several national breed dog charities. It’s raised over £10,000 in the past.

“Having moved to Lincolnshire I want to support Lincolnshire-based charities and the difference this time is the plan to produce an e-book, working title ‘Give a Dog a Home’, and possibly printed copies.”

For more information about Nigel and his work visit www.nigelordsmith.com