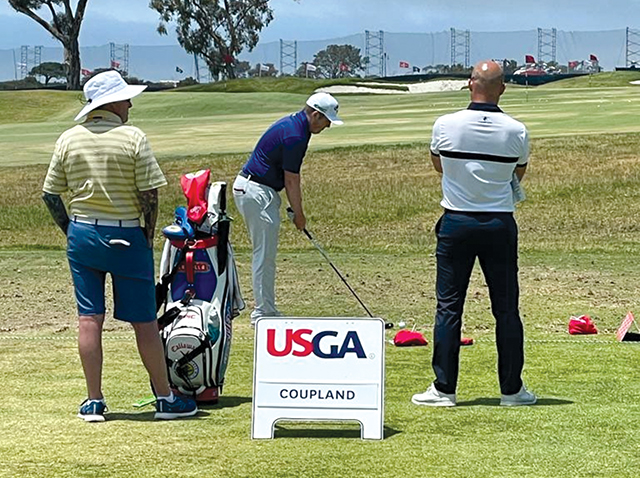 A passion for golf which began when he was a teenager has taken Dave Coupland all over the world – including America, where this year, he tells Kate Chapman, he realised one of his biggest dreams by competing in the prestigious US Open.

Dave, who lives in Boston, travelled to Torrey Pines Golf Course in San Diego, California, where the annual event takes place, with his dad Paul by his side as caddy. Although the result wasn’t quite the one he hoped for – he unfortunately went out following the second round – he says the opportunity was a fantastic one.

“It was an amazing experience, even though the result wasn’t as we wanted, I managed to learn a lot moving forward which will develop my skills,” he says.

“I was playing some great golf and had chances to be under par in the second round, but I lost my ball in the rough and it took just a few seconds longer than the three minutes allowed to retrieve it.

“This meant I had to replay it, and unfortunately I lost my momentum, but we learn and put these lessons into practice.
“Nevertheless, it was amazing – things were quite different in America, they were almost back to normal. California, where we were, made an announcement to say people who were fully vaccinated didn’t have to wear masks.

“There were 10 to 15,000 spectators in the gates, so there was a brilliant atmosphere as they really love their sport, so it was very rowdy! We stayed until the end and people were drinking and having fun, and it was great to see as that’s all part of it.”

Dave’s passion for golf started around the age of 13, when he tagged along with his dad and some of his work colleagues to a driving range.

“I liked sport and played quite a bit of football and tennis already but once golf came along it completely engulfed my life and I was immediately addicted,” recalls Dave, who grew up in Boston attending Boston West Primary School before William Lovell secondary.

“I just loved being outside and with golf, every day is a different day. Nothing is ever the same – with tennis for example you’re on the same size court which can be a little monotonous. Golf can take you anywhere in the world and luckily for me, it has.

“It was just fun for a start, but the more you play the better you get, and other opportunities come along.”

As his skills and confidence grew Dave entered various competitions and was then picked for the county. From there he took part in a number of national amateur events, before being picked for the England team.

“I managed to go through all the ranks, played on tours and gained an apprenticeship, but I don’t really see it as a job, I’m doing something I love,” says Dave, who now plays at Woodhall Spa Golf Club.

“Because I was playing a lot of golf while I was still at school, I did my work experience with the green staff at Boston Golf Club, which for a young lad was fantastic. I thought if I got my work finished early, then I could go off and play golf afterwards – I loved it! I was down there whenever I could be every weekend and holidays!”

On leaving school at 16, Dave completed an apprenticeship in sports turf management, gaining NVQ 2 level. This opened up the possibility of securing a job at any golf club and the opportunity to pursue a variety of careers ranging from head greenkeeper to working in course design. His playing career has also gone from strength to strength and in 2007 he qualified for the British Open on his first attempt.

“I just thought I’d have a go, but I managed to get in as an amateur, it was quite early on in my amateur career, it was brilliant to be able to play,” he says.

“Another highlight came when I won the Order of Merit on the PGA Euro Pro Tour and that got me started on the road to better things. I’ve always wanted to play in as many majors as I can and so far I’ve been lucky enough to play at two opens.”

Dave turned professional in 2011 and spends 40 hours plus a week playing and training while many weeks and months are spent away from home on the PGA European tour. He tries to get back to see his fiancée Katy, family and friends whenever he can and enjoys gardening and a few rounds of not-so-competitive golf with friends.

As for the future, Dave has a busy time ahead with tournaments in Wales, Northern Ireland, Scotland, London, Czech Republic, Switzerland and Italy. At the end of the year he’s also getting married, after his wedding was delayed due to the Covid-19 pandemic.

And then it’s back on the road again with his dad, who continues to caddy for him.

“Dad had done a few events with me before the US Open, so when it came around he had to make a decision about his job and thankfully he managed to come to America with me.

“It’s good, we work well together on the course and off, and have a great relationship,” adds Dave.

“A lot of people sometimes clash with their parents, but we’re not like that, and it’s nice to go out there and make memories together, not too many people get this opportunity.

“I’ve got a few more targets to aim for this season before it’s out – I want to get into the top 60 players of the Order of Merit. I’m currently 109th, at this stage it sounds a long way off, but you only need one good result to catapult you up the rankings, so that’s my main goal at the moment.

“The others are to keep playing well, trust what the coaches are saying and have a bit of luck along the way. You’ve just got to keep remembering the highs, and they help you get through the lows – that’s how it is with professional sport, but I do love it.”