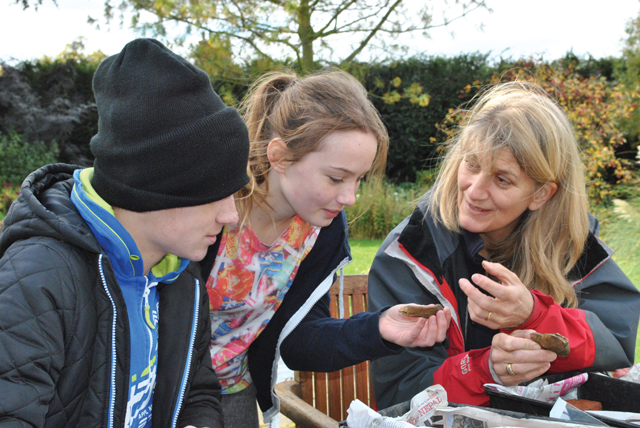 Carenza Lewis and the Our Lincolnshire project

People across Lincolnshire are being encouraged to think about the county’s heritage and what it means to them through a new research project being led by former Time Team archaeologist Professor Carenza Lewis.
As part of her new role at the University of Lincoln, Carenza hopes to encourage more of us to have our say about the aspects of heritage that are valuable or significant to us – and in particular those in rural areas which do not draw as much attention as those in our cities.

The Our Lincolnshire project, also being led by Professor Matthew Cragoe, Pro Vice Chancellor and head of the university’s College of Arts, is made up of several phases including an online questionnaire, which will aim to shape how heritage is presented and looked after today and in the future, while ensuring it continues to play a part enhancing lives across Lincolnshire.

“When I was on Time Team, my work as an archaeologist and historian explored the past with people across the UK and beyond.

“Since becoming professor at the University of Lincoln, I am lucky enough to live and work in Lincolnshire and I now hope to learn more about how heritage matters to people in this county,” explained Carenza.

“We are interested in this because while research has shown that heritage benefits people in many different ways, we know that the heritage sites, collections and traditions of Lincolnshire’s rural areas do not attract as much attention as the many iconic historic attractions of the city of Lincoln. This means that people may be missing out on the benefits which heritage can bring.

“We hope Our Lincolnshire will get people in Lincolnshire connecting with heritage in a range of creative and meaningful ways. It’s our chance to change the future of the past,” she added.

As well as the online survey available until the end of March, the team has also launched a web app called My Lincolnshire Collection, through which people can choose their top ten Lincolnshire heritage objects from a selection of 100 images online.

Another component of the project, funded by Arts Council England, will involve local theatre companies Eggbox Theatre and Flickbook Theatre liaising with community groups in Gainsborough, Grantham, Spalding and Louth to create new live performances which will be filmed and made available online.

Our Lincolnshire will also explore sport as a type of heritage and will examine how local sports organisations such as village cricket clubs have been woven into the lives of their communities.

“Cricket is heritage too – it’s a traditional game that many people across the country have been involved in and we’ll be exploring what people think about it and what they remember of it. Heritage doesn’t just have to be about studying events, dates and places,” said Carenza.

“I’ve only recently moved to Lincolnshire and I think it’s absolutely fantastic. This county has so much great history – John of Gaunt and his mistress Katherine Swynford for example. These are people we have read about and these are the places they used to walk!

“A lot of heritage does get overlooked – especially the everyday things, which can be really important. Lincoln Cathedral is spectacular, but it’s a one off, so through this project we want to look at how people appreciate the everyday things too.”

Carenza – who studied at the University of Cambridge and specialises in medieval rural settlement, demography and landscape, community archaeology and public heritage – says her passion for the subject started at an early age.

“I remember loving learning about the Ancient Egyptians when I started school,” she recalled. “I can remember so clearly all the displays and just that excitement about the past and memories, and the fact it was so different – it just got me. I cannot ever remember a time when I wasn’t interested. Dinosaurs fascinated me too.”

Carenza grew up on a farm on the Norfolk/Suffolk border where her interest in archaeology was sparked when she would go hunting for fossils, taking her finds to Norwich Castle Museum, which ran an identification service.

“I’d go out walking and just that idea that you could find something physical without having to go into a shop and buy it was great – to just go and find them really excited me.

“I was lucky enough to have access to that. I did find a couple of vertebrae belonging to an Ichthyosaur (a giant prehistoric shark) and that was really exciting. I got a little report note from the museum, I was being taken seriously and had proper names that I could look up in books.

“I’m very supportive of local museums and those services being returned. Services that, in the grand scheme of things, cost pennies. It just makes such a difference to the richness of people’s lives.

“For a long time I wanted to be a palaeontologist and to go to Africa and discover the so-called evolutionary ‘missing link’ between apes and humans, but as I got older, I became more interested in humans rather than animals in the past – how things change, what life must have been like before modern transport, medicine and so on.”

Carenza began her career as an investigator for the Royal Commission on Historical Monuments of England, researching sites and landscapes of all periods. In 1993 she was one of the original presenters for Channel 4’s Time Team and remained with the show until 2005. In 2004 she moved to teach at the University of Cambridge where she set up Access Cambridge Archaeology to benefit the wider public.

She came to the University of Lincoln last year and combines research and teaching in archaeology, history and heritage with public outreach, committed to involving members of the public in the research process.

Other projects she is leading include an archaeological dig with a community in Gainsborough and a project with RAF Scampton working with servicemen on a Roman villa.

“My role is to provide inspiration for ideas and put people in touch with others to provide support and training – and to enable them to help advance the research. Through these projects people really enjoy getting to know each other; it’s taking part in something a bit different, it’s hard work but it’s also enjoyable and they’re creating something positive as well as learning something new.”

To find out more about the Our Lincolnshire project and take part in the survey visit www.ourlincolnshire.blogs.lincoln.ac.uk