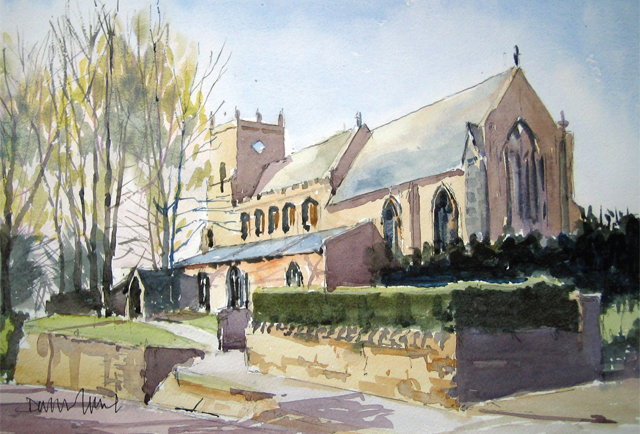 Centre will be boon for local groups

Excitement is mounting in the popular Lincoln edge village of Navenby where a much needed £1.03 million community hub is nearing completion.
More than three years in the planning, The Venue@Navenby is causing a real buzz. It is poised to become the base for numerous village organisations and a place to meet for other groups based within the neighbouring Cliffside communities.

With increasing numbers of people keen to live and raise their families in the countryside, it can be a challenge to find villages which still offer good facilities. But Navenby has – and now it is going one better with this fantastic new centre, which could encourage more people to join local organisations, and which will also have the power to create more rural jobs.

Project manager, Malcolm Smith said The Venue is scheduled to be up and running by September and the good news is that it is already attracting private bookings from groups and individuals who want to use these swish premises for one-off events, meetings and family celebrations.

“When we explored the concept of this building, we quickly identified that we needed to create something which would provide accommodation for a wide variety of village groups and activities and also serve Navenby’s expanding population,” said Mr Smith.
Census records reveal that Navenby had a population of 947 people in 1971. In 2001, it had risen to 1667 and now it stands at 2,200 residents. At least 200 houses have been put up since 2001 and more could be on the horizon.

The new centre, being built on the John Cutforth Playing Field, off Grantham Road, will finally take pressure off the village’s currently inadequate communal facilities for larger functions and needs for day care and provide cost-effective accommodation for the Navenby Parish Office.

“The old Village Hall was built in 1971 as part of the primary school and served its purpose well, but was too small and not equipped for today’s population and today’s users. It has been returned to the school for much needed extra space. The new Main Hall at The Venue will meet the need,” said Mr Smith.

“The Parish Council, which currently rents its High Street office, also believes that it should not be spending taxpayers’ money on having to rent space – a new office within The Venue will solve that issue.”

Many organisations have thrown their financial support behind the centre, which is being built by Lincoln based Beckside Builders, including Lincolnshire County Council, the Football Association, WREN and others.

“There has also been a big effort to find money locally. Everyone in the village has been holding events and buying bricks, at £5 a go. Their enthusiasm for this new centre means they have raised more than £12,000 for this project, in addition to donations from local businesses,” said Mr Smith.

Starting with a blank canvas has also allowed everyone involved to create the best possible design for the 12,000 sq ft building, which is equipped with an impressive range of rooms – offering local users and those renting space for special occasions lots of flexibility.

“The new pre-school room will be available for ten hours a day, five days a week, fifty-two weeks of the year. People will be able to drop their children off at, say, eight o’clock in the morning and collect them again at six o’clock,” said Mr Smith.

“This is very good news for the community-managed Happy Days Pre-School, which already has twenty-five children on its books, but can only use the present accommodation for 3¾ hours on four days a week – not to provide full day care. The new facility will provide child friendly space for up to forty-six children.”

Navenby Junior Football Club, today providing football to 100 children, with a plan to grow to 200 with support from the FA, will also have tailor-made accommodation within The Venue – which is equipped with four changing rooms, showers and two referee’s/official’s rooms.

“The club and youth room is a much needed asset. Groups based in all the nearby Cliff villages are working together to get funding to hire a dedicated youth worker to support new youth programmes in each village,” added Mr Smith.

Then of course there will be the new Parish Office and police room.

Mum, Claire Simpson-Brunnock said: “This project has drawn different ages groups in the village together. It is important to have somewhere where people can meet together and it is really exciting to see everyone caring so much about their community.

“Happy Days Pre-School currently uses the Methodist Church Hall on a part-time basis, for 3¾ hours, four days a week, but there is a real need for full-time child care provision in the village.

“Having purpose-built facilities for young people to use also shows they are cared about and it can help to inspire them to grow and develop here.”

Claire added that The Venue could ultimately create up to about twelve jobs and because of the facilities it will offer, it will allow families more freedom and bring more disposable income into the community.

North Kesteven District Councillor and Navenby Parish Councillor, Laura Conway – who runs Navenby Antiques Centre with her husband Dean – said: “Navenby is a thriving village, and a wonderful place to live. We have almost everything we need here without the need to leave the village, we are very fortunate.

“Navenby has grown significantly in recent years, and The Venue is a much needed and welcome facility. It will give local people a superb meeting place and base for a huge range of activities. The provision of extended child care facilities will make life very much easier for young working families, and the provision of a youth room has exciting potential for projects with our young people. These are exciting times, and we all look forward to the grand opening soon!”

Navenby shopping
One of the most striking things you notice when you visit Navenby – or even if you are simply driving through – is that this attractive village has lots of facilities.

Whether you are in search of a butcher, a baker – or someone who maybe sells, rather than makes, candles – then you are in luck!

And there are some early risers among them too. Take Navenby News, for example, where owners Dave and Sue Wicks are up with the larks. The couple, who have lived in the village for eight years, have been at the helm of the newsagency for three.

“We are open from 5am in the mornings to 6.30pm in the evenings, on Mondays, Tuesdays and Thursdays; between 5am and 7.30pm on Wednesdays, Friday and Saturdays and on Sundays between 5am and 1pm,” said Mrs Wicks.

“As well as selling newspapers, we stock cards and gifts and offer a dry cleaning service. I have also introduced shoe repairs and a range of party goods. It is really friendly in the village and we have loyal customers.

“I think that The Venue has long been needed because a lot of things are run from the school, which is not really the right environment for everything.”

A stone’s throw from Navenby News you will find well-known family butcher, Odling Bros. Today fourth generation family members, directors Alan and Roy Odling are at the helm and Roy’s son, Philip (fifth generation) also works for the business, which opens at 6am.

They said: “Our catchment area includes people living in Newark, Sleaford, Grantham and Lincoln. But we also get customers from a lot further away, particularly with our close proximity to RAF bases. Visiting friends pop in and buy items.

“We have a delivery vehicle and deliver to customers locally, but we are also concentrating on our website. People can order online and have local delivery or postal delivery if they live further afield.”

Odling’s, which employs about twenty people, also supplies a number of restaurants and pubs and is keen to build up this side of the business.

Macy’s Brasserie in the High Street is owned by chef Felicity Macy, who is helped by her son Benjamin Havilah Willetts. Like Odling’s this business is an important local employer, having by mix of eleven full and part-time staff.

“We opened on 1st April, 2010, which we thought was interesting in a recession,” said Felicity.

“Business at the moment is very unpredictable and can be up and down, but we serve a lot of people from the surrounding villages and also attract diners from the Lincoln and Grantham areas.

“We mainly use local produce and make our own breads and jams and we also specialize in fish and seafood, including fresh oysters and mussels. We cater for private parties and people can book our whole restaurant.”

Other shops and services in the village include the gifts and homewares shop Jolly Posh, Welbourne’s Bakery, Navenby Antiques Centre, Navenby Co-op and the Seconda Dress Agency.

Mrs Smith’s Cottage is a wonderful example of an early-Victorian Lincolnshire Cottage and gives visitors a real taste of what life was like in days gone by.

The Cottage and Visitor Centre are home to artefacts and information about the life of Mrs Smith – the cottage’s last resident – from the Edwardian period through to the late twentieth century. Mrs Smith lived independently in the property until 1995, when she was 102 years old.

In June and July, this attraction is open from Friday to Sunday, inclusive, between the hours of 1pm and 4pm. These hours are extended in August – to allow people to visit from Wednesdays through to Sundays.

The cottage, which is in East Road, hosts regular events. On Sunday, 3rd June it is having a Big Royal Jubilee Lunch and Fun Day, including optional activities. Entrance, to include a cold buffet lunch and tour is £4 per person, but places have to be booked. For details call Jennie on 07887 928733.

St Peter’s in Navenby is a Grade I listed Anglican church and is interesting because it features so many different styles, although its origins are believed to date back to the thirteenth century.