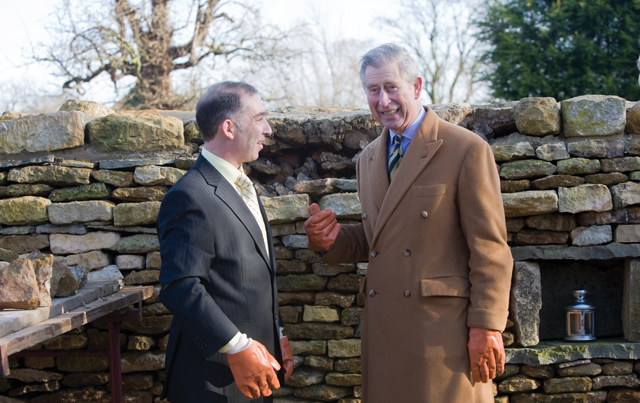 “Dry stone walls have excellent acoustic properties,” explained Andy Craig, a Lincolnshire based dry stone waller, as he showed off a recent project in the cliff village of Fulbeck.
The wall is in the unlikely setting of a recording studio and Andy was commissioned to undertake this unusual work by a professional musician.

“It is definitely one of the jobs I’m most proud of,” said Andy, “and it’s great to be involved in such an interesting project.”

The wall is beautiful and, removed from its usual outdoor rural setting, seems all the more striking.

Andy has been practising the ancient craft of dry stone walling for more than twenty-five years and has been based in Great Gonerby, near Grantham, for over ten years. “Lincolnshire is not traditionally associated with dry stone walling to the same extent as some other parts of the country such as the Cotswolds or Yorkshire,” Andy explained, “but in fact it does have its own heritage in the craft.”

Testament to this fact is the many miles of stone wall that are clear to see throughout the county, and also the fact that Andy is as busy as ever.

Dry stone walling has been used as a method of enclosing fields for thousands of years but in recent decades has undergone something of a renaissance that has reflected the growing interest in conservation, both in terms of traditional skills and environmental sustainability. “The craft dates back a long way but probably most of what we see in the countryside today is a reflection of enclosure, a process that took place right up to the nineteenth century,” said Andy, ”and which made physical boundaries more necessary.”

In their most basic form dry stone walls would have simply been piles of stone collected in the process of cultivating land and left around the perimeter of fields.

The craft has come a long way since then, as has Andy’s career, but he still remembers the early years of his training. “The bread and butter of most wallers remains to this day working for farmers and conservation groups, often in wild and remote places and I have done my fair share of work on windswept hillsides. Thankfully Lincolnshire tends to be a bit flatter and drier!”

Andy was born in Nocton, just south of Lincoln, but his family soon moved to Rotherham where he spent his childhood, which explains his Yorkshire accent and perhaps also where the seeds for his future career were sown.

It was in Derbyshire, however, where Andy did his apprenticeship. “I was fortunate enough to have a mentor at the Dry Stone Walling Association, a highly respected craftsman and a great inspiration, who guided me right up to the day that I received my Master Craftsmen Certificate in 1989.”

Shortly after that Andy was commissioned by the National Trust to build the impressive dry stone walls at Fountains Abbey Visitor Centre in Yorkshire. “Without doubt the tallest wall I have ever built,” reflected Andy.

Many years followed of competing all over the country in walling competitions, in which Andy had plenty of success and a photograph shows him proudly holding an armful of trophies. ”That was 1991,” said Andy, “when I won several categories in the Cotswolds championship and was probably the pinnacle of my competitive days.”

Years of competing furnished him with an understanding of the many different styles of walling and the different types of stone found around the country. “Cotswold stone is small and thin,” explained Andy. “I would line up a dozen stones along my arm, like a waiter balancing plates, and then place them quickly. A Cotswold wall may need two or three times as many courses as a Lincolnshire wall, where the stone is larger and fatter, so you have to work fast. In Derbyshire, on the other hand, the stone is much more angular and difficult to work with, so tends to be laid in a much more random fashion.”

Andy moved back to Lincolnshire in 1999 – both out of an interest in returning to the county of his birth but also in search of a new challenge – and has enjoyed pursuing his craft in the county since. And while his career has continued to develop so too has dry stone walling. “Walling is still mainly a rural activity but dry stone walls are increasingly seen in gardens and as sculpture features because of their visual qualities,” said Andy, “and conservation of course has become more and more important.”

He added: “Environmental artists such as the internationally acclaimed Andy Goldsworthy have raised the profile of dry stone walling and brought it to the attention of a whole new audience.”

Andy had the opportunity to experiment when he was asked to build a sculptural wall in a garden at the Hampton Court Flower Show in 2009. The garden was designed to show traditional rural skills in a new light and Andy’s dramatic wall curved and undulated through woodland planting like the tail of a huge dragon.

“That was an interesting experience, and great fun. I am used to doing demonstrations at country shows, like the Heckington Show, but Hampton Court was a great opportunity to do something a bit different.”

Closer to home, probably the proudest moment of Andy’s career to date was when Prince Charles accepted an invitation to visit one of his walls in Brandon, near Grantham. “In 2011, I heard that the Prince was due to make an official visit to the county. Knowing that he is a big champion of rural crafts I decided to write to Clarence House to invite him to see one of my walls. To my complete amazement he accepted, even changing his route through the county,” said Andy. “Handing stones to the Prince for him to place on the wall was one of the more surreal experiences of my life and one I will never forget.”

Talking to Andy, it is clear that he continues to have great passion for, and takes enormous pride in, what he does. “No matter what the job I always endeavour to build to the best of my ability,” he said.

Andy is very much rooted in the traditions of the craft and a conversation with him will be peppered with strange, old, and sometimes comical sounding words. Talk of ‘smoots’ (small openings at the base of walls to allow game to pass through), ‘cheek ends’ (the large smooth stones that support wall ends) and ‘cock and hen’ (the flat upright coping stones on top of walls) all help to enrich the story of his craft.

The future of walling looks promising and may have something to do with Andy’s own plans. “I would love to help the next generation of craftsmen find their feet, in the same way that my mentor did for me, and pass on some of my experience. So I hope to have the opportunity to run courses in the county sometime soon.”

Back in the recording studio Andy follows the line of the wall through the window into the garden and contemplates the next phase of work: “I can’t wait to finish off this one,” he said, “to see the full effect of the wall providing a physical and visual link between the house and garden.” It is certain to look great.