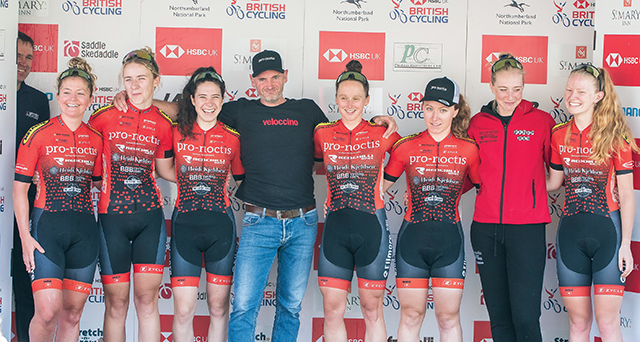 One of British Peloton’s most experienced riders, Lincoln’s Jo Tindley recently became British Champion having won the National Circuit Championships in style in her hometown. By Kate Chapman.

The 34-year-old is part of the nine-strong Pro-Noctis–Red Chilli Bikes–Heidi Kjeldsen team, which has taken the road cycling scene by storm in its first season.

Established by Jo’s partner Rick Lister in 2020, the team already has a raft of achievements under its belt, including winning the HSBC British Cycling National Series Champions title for 2021.

They then went into the British Road Race Championships, held in Lincoln, in October, as the best domestic cycling team in the UK and it was here in her hometown that Jo secured her longed-for title.

Out in front from lap two, she won the race with an impressive lead of one-minute 16 seconds over the chasing group, headed up by her teammate Corinne Side, who also finished on the podium.

Speaking after her victory, Jo said: “It’s absolutely overwhelming, and still hasn’t sunk in yet. My aim was to put in a big attack and get away quite early. We knew we had to work together as a team. This jersey is for us, it’s not just for me, it’s for the girls, it shows what teamwork can achieve, and I am so proud of them. I can’t thank them enough.

“In 2018 I came second, it was a turning point for me, I knew I could win, and I wanted to do it, and I came back fighting – this was my main aim for the season. To do it in my hometown, in front of a home crowd, was amazing.”

Jo, who grew up in Hertfordshire and lived in the Cotswolds before moving to Lincoln to be with Rick five years ago, took up cycling after her stepfather bought her a mountain bike.

“I grew up riding horses, I loved anything fun and a bit dangerous! I was given a proper mountain bike for my 12th birthday and took part in my first race in the Forest of Dean shortly after,” she recalls.

“That’s how it all started – I won that race, and then I got massively into it after that. A year later I was picked up by British Cycling.”

Jo rose through the ranks, competing at both the youth Commonwealth Games and European Championships. She decided to take some time out from competitive cycling before returning to the Peloton in 2012.

Jo competes in the criterium – a race of a specified number of laps on a closed course over public roads, with the winner being the first rider across the line without being lapped – and the road race, which covers distances of up to 100km.

“At the domestic level we do both, but for me the criterium is my favourite – it’s really great fun, fast and aggressive and I love that,” says Jo, who trains for 15 to 20 hours per week.

“It’s been really hard work, Rick started putting this team together over a year ago, as lockdown was coming to an end.

“We didn’t know each other when we first came together, but I’m so proud of what we’ve achieved and how well we’ve worked together,” says Jo, who works as a sports therapist and level three coach for Downing Cycling, to fit in around her training schedule.

“It’s been hard because of lockdown, and because we’re all spread out, we’ve not been able to train together too much.

“People don’t see behind the scenes, it really is a team sport. We have a captain and a team leader on the road, going back to the nationals they were all working to help me, covering moves with other people dotted about the course, feeding information back. There’s lots of tactics. There aren’t many teams that ride like us, but I think that’s why we’ve been so successful together.”

Jo also won the East Midlands Road Race title in Market Rasen (with an impressive lead of four minutes, after a solo breakaway in poor racing conditions), while in August she secured the Tour Series blue jersey, having led the sprint competition from start to finish.

Jo and her teammates are now enjoying a well-earned break ahead of the next racing season in the spring.

“This year has been so successful for the team – beyond our expectations! It wasn’t our aim at the start, so I think we are going to spend some time regrouping and thinking about what we are going to do next season,” she adds.

“We need to figure out how to keep that momentum going. Hopefully the fixture list will be back to normal but it’s too early to say yet.

“There’s the possibility we may branch out a little and go into Europe if we can secure enough sponsors, but we’re still working on that.

“For me it’s all about enjoying what I do, I definitely want to be out there trying to retain my title next season.”

The team is seeking new sponsors and partners. If you would like to become a sponsor please email finishlinert@gmail.com to find out more.