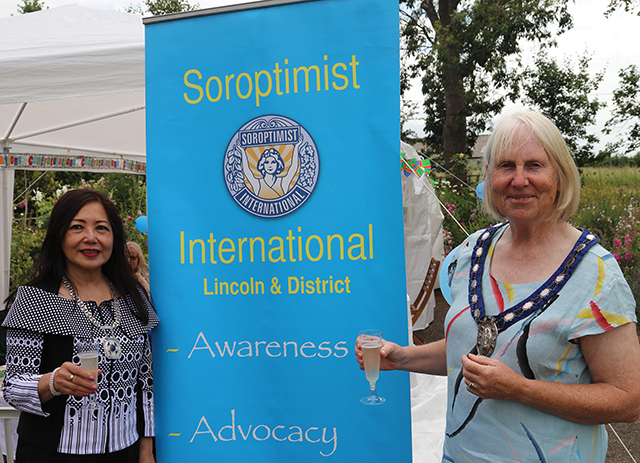 Championing the voice of sisterhood

Soroptimist International of Lincoln & District is part of a highly respected global service organisation which celebrates its 100th birthday this year. Barbara Young finds out how this remarkable group is making a difference in improving the lives of women and girls worldwide.

For Soroptimists, fundraising and providing practical help while striving to achieve “the best for women” in every sphere is what unites this strong group of business and professional women.

The aptly named Soroptimists was coined from the Latin ‘soror’ meaning sister, and ‘optima’ meaning best.
Dedicated to transforming the lives of women and girls through “education, empowerment and enabling opportunities”, Soroptimist International was first established in Oakland, California in 1921, where it began as a networking opportunity for 80 professional women seeking to broaden members’ horizons through weekly speaker meetings followed by debates.

Its first project was to save redwood trees and by gaining public support Soroptimists took on powerful lumber companies and saved a portion of forest, which was set aside as protected land, which it still is today.

In 1924, a branch was founded in Britain with the focus being to befriend girls who had no mother and to establish an open-air hospital school. This led to other clubs developing in other cities and thus the seed was sown and a global membership began to take shape.

This approach and dedication dates back to the inaugural meeting of the Lincoln & District Club which was held on 20th October 1945. In its first year, the club recruited 37 members who went to regular monthly meetings and joined together in the first charter ceremony on 16th October 1946. The club’s service to the local community started with members holding a party for 30 girls from the remand home in January 1947.

According to Lincoln’s branch president, Hilary Baxendale, the vision of Soroptimists, who come from all walks of life, is “women and girls will achieve their individual and collective potential, realise aspirations and have an equal voice in creating strong, peaceful communities worldwide”.

“We currently have 22 members from a range of backgrounds with collectively an immense amount of workplace and life experience,” Hilary explains.

“We have members with backgrounds in education, health, social care, law, public service, catering and translation. This provides the club with diverse and interesting perspectives on all topics, stimulating interesting conversation and debate.

“Locally, we support the women’s refuges in Lincoln and Newark, as well as the Nomad Trust. We have worked to end period poverty and have supported a local charity which endeavoured to compensate for the loss of Surestart. We have also worked with a charity that provided support for women coming out of prison in a successful attempt to reduce recidivism and for many years we provided respite holidays for children from Chernobyl.”

To help women globally, Lincoln Soroptimists have campaigned to try to end modern-day slavery, child marriage, and female infibulation (described as much more drastic and life-threatening than circumcision).

“We have tried to ensure that women have clean water (supporting Water Aid), toilets (by supporting toilet twinning) and menstrual products to enhance women’s safety, and their ability to attend school and go to work.”

Global initiatives
Each club belongs to one of five Soroptimist International Federations. These are: Africa, Great Britain and Ireland, the Americas, South West Pacific and Europe.

“In New York, at the United Nations Headquarters, Soroptimists have the opportunity to influence debate on gender equality, sustainable development, financing for development, trafficking, migration, education, ageing and peace and security,” explains Hilary.

“In Geneva, the second biggest United Nations centre, Soroptimists influence the Refugee Agency and can influence the UN’s Human Rights Council and its human rights review mechanisms, including the elimination of all forms of discrimination against women.”

The Lincoln branch has links with Zaanstreek, near Amsterdam, Pisa in Italy and Petrozavodsk in Russia, and are also in the initial stages of forming links with Kraków in Poland.

“National conferences can be anywhere in the country, these also attract delegates from other countries. We have close contact with regional clubs, meeting up four times a year. We also attend each other’s social functions and, more recently, share speaker meetings on Zoom. Of the projects we undertake, some are led internationally, some nationally and some chosen at a local level.”

Benefits of membership
Any woman can join the Soroptimists via email or through personal introduction. Not only is this a great opportunity to make new friends, but Covid restrictions permitting, members can also enjoy access to the interesting and varied speaker programme, as well as regular coffee mornings, social functions and formal celebrations.

A geography graduate and former teacher in a local comprehensive, Hilary describes herself as “a comparative newcomer” to Soroptimism.

“I heard about the club from friends while still working, but it wasn’t until I retired that I joined. I was enjoying a very busy life and travelling widely to wonderful destinations but needed to feel useful.”

Hilary began her first year as president just as lockdown was announced in 2020.

“Once the full impact of Covid was realised we, like everyone, took to Zoom. Initially this enabled us to have social and business meetings and as confidence grew speaker meetings were reintroduced. Mindful of our members who do not use Zoom, contact has been made by mail and, when Covid allowed, we had actual gatherings of members.”

As well as being an active member dedicated to doing her bit for the organisation, Hilary says she very much enjoys the friendship and camaraderie of fellow members.

“Their collective wisdom is awesome. By and large they have all been successful in their field, often having to break new ground to do so. Some of our very longstanding members were and are single because of the discriminatory attitude of some professions, which forced women to abandon their career on marriage.

“From an academic perspective, I knew only too well just how disadvantaged women and girls are across the globe. Aid and support offered is often well meant, but not always appropriate.

“I have always believed that aid given to women at a grassroots level is more effective than large showy projects and schemes favoured by male dominated governments. This was where I hoped to make a difference, however tiny. Local issues have become increasingly important as austerity and Covid have caused a stellar increase in domestic violence and reliance on food banks.”

Making a difference in a pandemic
Hilary points out that even Covid couldn’t stop the force and energy of the Soroptimists as all important lobbying was done from home even when socially isolating.

“We have a close relationship with Newark Women’s Refuge and were able to send age and gender appropriate toys and gifts at Christmas, as well as the usual toiletries.

“Money donations enabled the club to buy a radio, hair dryer and nativity scene, which had been identified as needed purchases, while more recently we have provided ‘moving on’ boxes for women and families leaving the refuge.

“As fundraising opportunities have been difficult, we concentrated on collections. We sent 101 pairs of new pants and 75 new or gently worn bras to ‘Smalls for All’. We have also collected foreign coins, stamps and blister packs and old £1 coins, which convert to revenue for various charities.”

In spite of a difficult year, the Lincoln & District branch has clocked up an impressive list of achievements, including support for Tree Aid, with trees planted locally, small forest planting in progress and £300 donated to the charity, which will specifically benefit women, as well as £316 sent to Water Aid.

Last year they also held sponsored walking and biking throughout August for girls in Nepal, raising £1,385.

“While we are apolitical, where hard fought women’s rights are being challenged or eroded we must act. Where women’s projects are the ‘low hanging fruit’ which can be most easily axed to balance the books we must be vocal.

We can respond as individuals, but it is the collective response which has the greatest impact,” says Hilary

“It is considered that Soroptimists play a significant role in the creation of the new offence of non-fatal strangulation. By lobbying peers and MPs about the Domestic Abuse Act 2021 and about the digital download clauses in rape trials, we can again make a difference.

“We have a voice and it must be used.”