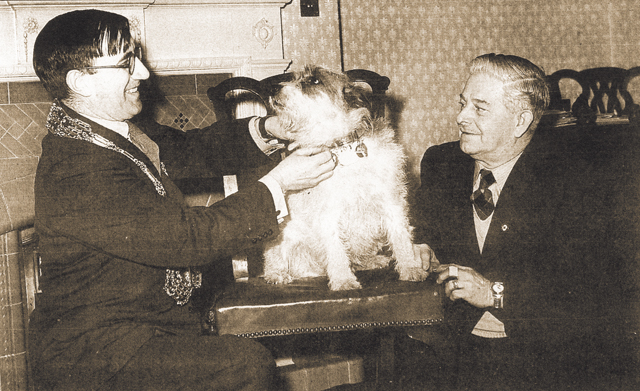 Characters from Lincolnshire’s past

JOHN TWIGG
John Twigg was born at Maltby le Marsh in 1887 and was educated at Alford Grammar School. In 1915 the family moved to Tothby Manor, near Alford, and when his father died in 1921 John took over the running of the farm.

John was a real fun-loving character who could not resist a practical joke and he enjoyed nothing more than debunking the pompous. He and his wife Mollie had five sons and the boys kept pet mice, who started to breed at a rapid rate. John advertised in the local paper, ‘Twigg’s Mouse Farm – any quantity supplied’ and was surprised to receive an order from Billy Butlin to supply 3,000 mice to the holiday camp at Ingoldmells.

John’s son Tom often recalled travelling with his brothers in a car to Butlin’s, with sample boxes of mice on their knees. John Twigg became internationally famous in 1934 when he dropped an egg from an aircraft. A trip by air was quite a novelty at that time and John decided that he would try this Five Bob Round the Town trip. The pilot flew low over Alford and John dropped a bad egg from the plane, which unfortunately landed on the police house.

John was charged under the Air Navigation Act and appeared before Alford Magistrates. At the hearing he claimed that he had been aiming at shoppers in the Market Place which was only seconds away by air. He was fined £2 with 15 shillings (75p) costs. On 9th August 1958 three charges were brought against John Twigg:

1. Harbouring on his person certain wild animals and reptiles with intent to release the same amongst the inhabitants of the town for the purpose of creating panic.

2. Writing and exhibiting certain prose and verse to the detriment of users of the highway.

3. Throwing eggs of uncertain age at the abode of the constable of the parish.

On being found guilty he was ‘forcibly and unceremoniously confined to the stocks until his fealty was respited.’

A plaque commemorating these events was placed in the Council Chamber at Alford. John Twigg was clearly regarded with great affection by the people in and around Alford. He died in May 1960, aged seventy-three.

FRANK SMALLEY
Frank Smalley was a much-loved grocery branch manager with Lincoln Co-op at North Hykeham in the 1950s, ’60s and ’70s. He had trained at Billinghay where he met his wife who was the district nurse. Before Hykeham he had managed the little shop at Hackthorn.

Nobody would claim that Frank was a star with the paperwork but when it came to customer service he was the tops. If an old tramp went into his shop for a box of matches he would leave feeling like a king. All customers were called Sir or Madam and nothing was too much trouble for this lovely man, who is still fondly remembered by many of his (now) older customers.

HENRY TYLER AND HIS DOG SNIPS
Henry Tyler and his dog Snips collected money for charity in the 1950s. Tyler had a stall on Lincoln Central Market at the corner of Cornhill and Sincil Street, where he sold costume jewellery and other trinkets. Snips was always on the stall with Henry and for a penny children were allowed to stroke the dog – the money went to charity. The pair were presented with many medals for their good work.