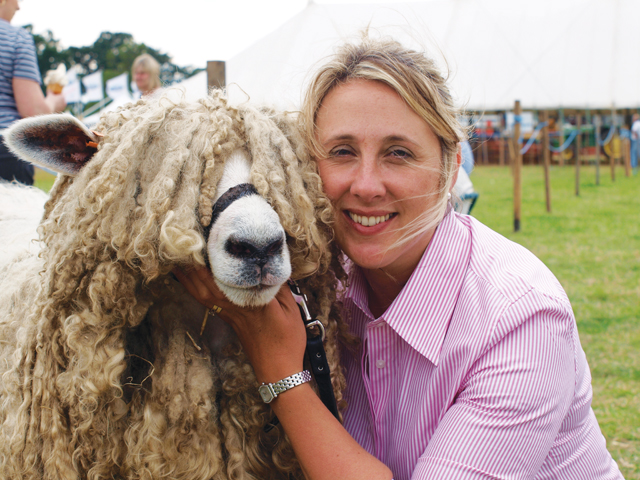 Lincolnshire Show is an important competition date for many of the county’s livestock breeders and showers but it would be difficult to find any other class of animal in the ring more closely tied to the history of the county than the Lincoln Longwool sheep.
Wool production was the basis of the county’s wealth before the Northern Renaissance and the Old Lincoln breed can be traced back before the seventeenth century. Robert Bakewell, the agricultural pioneer, used the Old Lincoln as the foundation stock for his sheep breeding programme in the 1750s to produce today’s improved breed, highly valued for its luxurious wool, meat and calm nature.

Walk around the show and visit the livestock sheds where you will find a section dedicated to the enthusiasts and members of the Lincoln Longwool Sheep Breeders Association (LLSBA), established 1892. They are custodians of most of the remaining flocks in the UK. Last year in Lincolnshire Life we interviewed their youngest member, James Chantry and he will be showing again this year. They are a friendly lot, led by the Association’s first female chairman in its 121-year history, Louise Fairburn, whose love of the breed is infectious.

“Longwools are incredibly charismatic animals,” she explained. “Their size can be quite intimidating but over 200 years of domestication has made them very easy to handle and unlike many other breeds they will come when called.” Louise is only five feet two but she or her husband, Ian can easily handle the winter shepherding of their flock on their own.

“When people ask me, I always say that a class is won or lost in those cold, dark months making sure the flock stays healthy and that their coats are well looked after.”

Louise will be taking seventeen of their more than fifty strong Risby Flock to the show, entering classes for lambs, rams, and gimmers (ewes which have not lambed). The finest fleeces are on the huge two-shear rams who have had just one shearing prior to entering their class.

“About five days before a show, we begin the job of ‘pulling out’, separating the staples of wool into individual tendrils so that the judge can run his hand through the coat. The fleece will extend down to the sheep’s feet, making them look not unlike Dougal from The Magic Roundabout.

“To see a pedigree ram in show condition gives me such a feeling of pride and satisfaction and makes me fall in love with them all over again.”

Rich in lanolin and weighing anything between eight and twenty kilos, until recently the fleeces had little resale value. There were also few outlets for the meat but interest in rare breeds has grown and Louise and the other association members are continuing the drive to bring the flocks back from the nadir days of the 1970s when only the continuation of a handful of heritage, family flocks prevented the breed from dying out.

The association is the custodian of the annual Flock Books which have been produced since its foundation. Going from beautiful, perfectly bound pages of breeding lines of thousands of head of sheep and hundreds of flocks in the eighteenth and early nineteenth centuries, the list was reduced to three A4 stapled sheets in the 1970s.

Records show that Longwools were exported in their thousands each year to Argentina up until the First World War and post 1940s to Russia where there are still bloodlines of Lincolnshire origin. The true bloodlines still exist within our county primarily because of three families – the Watts, the Birds and the Reads – who kept their heritage flocks in place at Messingham, Thorpe Latimer and Langton. Although there were still a few other flocks at this time, these three made a real difference by continuing to exhibit the breed at agricultural shows.

All animals need to be bred to survive and although Longwools have risen from being classified as category 3, Vulnerable by the Rare Breeds Survival Trust to category 4, At Risk, this still means that there are more than 900 but less than 1,500 breeding ewes in the country.

Louise continued: “The situation has improved since the 1990s with small flocks being established both in the county and other areas of the UK but we want to encourage more people to become members, hopefully to keep some Longwools and help improve the profile and the quality of stock.”

A great way to gain an introduction to Longwools is to go along and meet members of the association at the Lincolnshire Show or at the Heckington Show in July (27th and 28th). The annual sale of breeding stock and a shearing competition takes place at Heckington every year on the Sunday. It is by far the biggest turnout of Lincoln’s of any of the shows with a full programme of breed classes.

“Longwools are living history of our county,” said Louise. “There has been a resurgence of interest in rare breeds and even commercially there are now more opportunities to recoup some of the investment you make in your flock.”

Fleeces can now be sold privately rather than through a buying group and can fetch up to £30 each. Many still go to Russia or Holland where there is huge interest in felting and crafts using the fine wool. Others are bought by spinners to produce yarn.

In Lincolnshire the wool revival is being led by businesses such as The Counted Sheep of Mablethorpe who use all UK yarns to make stylish accessories and soft furnishings.

The Longwool was always a dual purpose breed and although there is a longer lead-in time for both the fleece and the meat, they produce slow, flavoursome lamb and mutton which can be found on menus at The Kings Head at Tealby, The Mill House at Covenham and recently featured as one of Rosie Dicker’s Supper with Rosie, pop-up restaurant dishes.

Perhaps the last word should go to Mary Steele, a long-standing member of the LLSBA and past breeder of Lincolns. Now in her nineties, she is an honorary life member who produced a book to commemorate the society’s centenary in 1992. In ‘Lincolnshire Land, Longwools and Legends’ she summarises the breed as follows:

‘…..the story of rural Lincolnshire, some of its people and their big strong sheep. Lincolnshire is no fairyland for tourists, those bred in Lincolnshire are no more beautiful then the rest, just good basic English stock, made of the ‘right stuff’.’

KEEPING YOUR OWN LONGWOOLS
If you would like to know more about keeping Lincoln Longwools, members of the association can take you, like Ian and Louise, from no knowledge to confident shepherd by sharing tips, husbandry skills and loaning rams.

You don’t need a large flock or in fact any sheep to support the group but if you do want to help preserve the breed many members have less than six sheep and fifteen would make a good show group. Louise would recommend no more than three sheep per acre because of the breed’s ready appetite but any smallholding or pony paddock is perfect for their grazing.

Prices for breeding gimmers are currently between £120 and £200 each while for a ram you could expect to pay around £300.