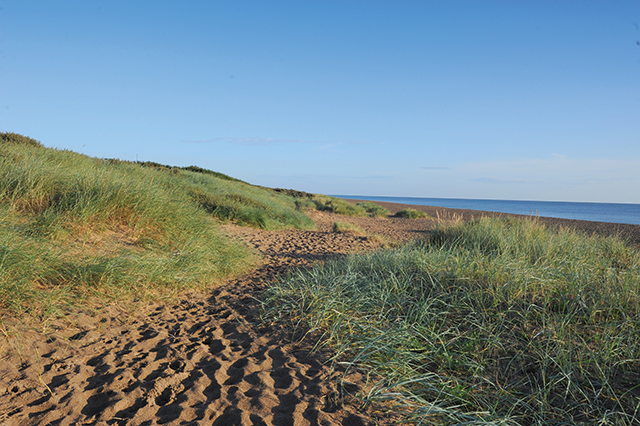 Walking part of the planned England Coast Path, from Skegness to Mablethorpe, Penny Wainwright sees how access to natural heritage and modern leisure attractions are proving a real draw for visitors.
‘Oh I do like to be beside the sea,’ enjoying the open skies and long sandy beaches. I was therefore delighted to hear of plans to open an England Coast Path by 2020 and especially to find the first sixteen-mile Lincolnshire stretch had opened on 27th February, between Skegness Pier and Mablethorpe North End. There have been public footpaths and bridleways, plus the beach, promenades and sea wall to walk along for many years, but it is the linking together of existing access which has provided an identified coastal path in Lincolnshire.

Natural England have the statutory duty to improve access to the English coast through the development of a long distance walking route, the England Coast Path. The aim is to keep the path as close to the sea as possible, with adjacent coastal land giving people space to explore and relax. I spoke to Andrew Best, a senior adviser with Natural England who told me the process for opening the Skegness to Mablethorpe path had taken three-and-a-half years. Jonathan Stockdale, a senior countryside officer for Lincolnshire County Council explained that they have now taken over the ongoing maintenance of the path. Two further paths are in the planning and development stages, to create a continuous path from Sutton Bridge to the Humber Bridge. The challenges for the section between Sutton Bridge and Skegness will be to lessen the impact on wildlife, especially between Frampton and Gibraltar Point, and find routes around or over the estuaries.

The first section of my walk was from Skegness Pier to Ingoldmells Point along the ‘Promenade’. This is an easy-to-walk concrete path, which is in fact part of the sea wall defences and narrows into a smaller path behind the sand dunes, with extensive views along the coast towards Ingoldmells Point.

On reaching the North Shore Golf Course, to ensure everyone’s safety, the path moves onto the beach for 400 metres. Back on the promenade, I arrived at Winthorpe, with bars and cafes along the promenade, serving the caravan sites on this stretch of coast. The Skegness Coastwatch Lookout Station is next to the promenade. It has flags flying to signal the volunteers are on duty, recording boats and other craft as they pass by to ensure safety at sea. A little further along, I passed behind the Butlin’s holiday site, with a manned beach gate providing access and security for visitors going onto the beach. Walking briskly on, I reached the busy Ingoldmells Point. This area with caravan sites and the Fantasy Island roller coasters silhouetted against the sky felt like more of an urban coast path. Although it was early in the season the sunny weekend weather had attracted many visitors to the coast and the path between Ingoldmells and Chapel St Leonards was crowded with people.

From Chapel St Leonards, the promenade continues onto Chapel Point. As part of the development of the coast path, a boardwalk funded by Natural England joins the promenade to the North Sea Observatory. This modern building is a visitor centre and houses the Chapel Point Coastwatch Station. Here I met Lincolnshire Wildlife Trust’s Coast and Wash warden, Dave Miller, and walked with him from Chapel Point where the coast path goes along the beach towards Anderby Creek. He talked about his role in promoting the nature reserves, beach and marine environments. There are activities for families, such as sea dipping and beach walks. With his expertise I went on a shoreline safari, looking at what the tide had left behind on the sand. The sand dunes are covered in Marram grass, which is important for preserving the beach and dunes.

Approaching Chapel Six Marshes, a striking structure can be seen. This is the Sound Tower, one of several ‘Structures on the Edge’, coastal architectural art installations between Chapel St Leonards and Mablethorpe. From Chapel Point the coast path becomes more rural, running through the Coastal Country Park which extends from Chapel St Leonards to Sandilands. Walking through the park, I saw reed beds which will come to life as the reeds grow and migrant birds arrive.

Back on the beach, we ended our walk towards Wolla Bank. When there is a very low tide, the remains of a Neolithic forest can be seen appearing from the sea near Wolla Bank. It is believed that at one time the forest stretched from Lincolnshire to the Netherlands. A week later I returned to this stretch of beach, when there was a large spring tide. At low water I managed to see old branches and trunks embedded in the silt on the water’s edge. I was excited to have found the edge of the forest, which is gradually disappearing under the sand.

My next coastal walk took me from Wolla Bank along the sand dunes towards Anderby Creek, where I found two more ‘Structures on the Edge’. The Round and Round House is a circular bird hide, which gives wonderful views through the slots in the walls. The Cloud Bar near Anderby Creek’s car park is the only purpose-built cloud spotting structure in the UK. It has a cloud menu and parabolic cloud mirrors.

The beach and dunes continue past Moggs Eye and Marsh Yard to Huttoft Beach, with the coast path on the dunes. Much of the sand we can see has been brought onto the beach from the seabed as part of sea defences. There is a rolling programme of work where about every five years targeted stretches of the beach will be replenished. This year work is taking part around Huttoft. The beach will be built up to help protect the sea wall and the land behind it from storm damage. I met an Environment Agency agent near Huttoft Car Terrace, who was inspecting the sea defences ahead of the sand replenishment work. Further along a digger was clearing sand from the edge of the sea wall as part of the regular maintenance work. Continuing along the sea wall, I passed the golf course and caravan sites of Sandilands before reaching Sutton on Sea.

Although the Lincolnshire England Coast Path was officially launched in February, my journey along the coast by the sea wall and beach and at different times of day, has made me realise how well used many sections are, and how much pleasure we find in being on our Lincolnshire coast.